Home / Health and Medicine / Cracks in the cellular transport system can be key to a new generation of cancer therapies
27.01.2014 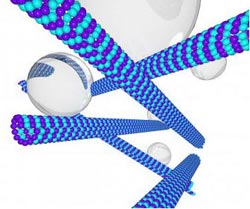 Researchers at Warwick Medical School have found that the minuscule tracks of a cellular railway system have a line of weakness, which tends to crack and cause the tracks to dissolve. Cancer drugs already target these microscopic railway tracks, which are called microtubules and are a thousand times thinner than a human hair.<br><br>Credit: Prof. Robert Cross, Warwick Medical School<br>

The study, published today in Nature Communications, explains how this tiny 'railway' system is a key target for cancer drugs and, as such, how this new discovery reveals how better drugs might be made. The tracks of this so called 'railway' are tiny tubes, called microtubules, 1000 times thinner than a human hair.

The research shows that a narrow seam that runs along the length of the microtubules is the weakest point. If the seam cracks and splits, the microtubule dissolves.

It has been known for some time that microtubules have a single seam that zips the structure together along its length, but the function of this seam has evaded scientists until now. By building microtubules with extra seams in the laboratory, and examining their stability using video microscopes, the researchers found that the more seams the microtubule has, the more unstable it becomes.

The new work dramatically alters thinking on how the microtubule system works and the search is now on for factors inside the cell that influence the stability of microtubule seams.

Professor Robert Cross, head of the research team at Warwick Medical School, explained, “It is clear that any new drugs aiming to stabilize or destabilize microtubules must target the microtubule seam. We expect this to lead us to a better understanding of the way microtubules are regulated in cells and why this sometimes goes wrong, such as in development of cancer.”

“Our findings help us to understand how some existing cancer treatment drugs actually work and this in turn should lead to development of new generations of better and more effective anti-microtubule drugs.”

The research was funded by the Association for International Cancer Research (AICR) and Marie Curie Cancer Care.