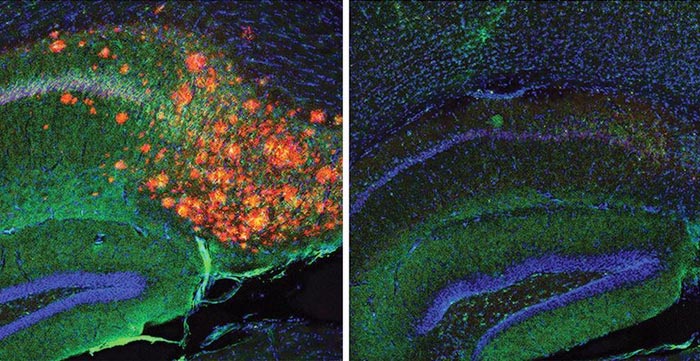 A team co-led by scientists at Scripps Research has used advanced imaging methods to reveal how the production of the Alzheimer’s-associated protein amyloid beta (Aβ) in the brain is tightly regulated by cholesterol.

Appearing on line Thursday ahead of print in the Aug. 17 issue of the Proceedings of the National Academy of Sciences (PNAS), the scientists’ work advances understanding of how Alzheimer’s disease develops and underscores the long-underappreciated role of brain cholesterol. The findings also help explain why genetic studies link Alzheimer’s risk to a cholesterol-transporting protein called apolipoprotein E (apoE).

“We showed that cholesterol is acting essentially as a signal in neurons that determines how much Aβ gets made—and thus it should be unsurprising that apoE, which carries the cholesterol to neurons, influences Alzheimer’s risk,” says study co-senior author Scott Hansen, PhD, an associate professor in the Department of Molecular Medicine at Scripps Research, Florida.

The other co-senior author of the study was Heather Ferris, MD, PhD, assistant professor in the Department of Medicine at the University of Virginia School of Medicine. The study’s first author, Hao Wang, is a graduate student in the Hansen lab.

A type of Aβ in the Alzheimer’s brain can form large, insoluble aggregates that gather in extensive clumps or “plaques”—one of the most prominent features of the disease at autopsy. Genetic evidence correlates the production of a subtype of Aβ with Alzheimer’s, yet Aβ’s role in both the healthy brain and in disease remain a subject of debate, after many clinical trials of Aβ-clearing therapeutics have struggled to show a benefit.

In the new study, Hansen and his colleagues take a close look cholesterol’s connection to Aβ production. Cholesterol’s role has been suggested by various prior studies but never confirmed directly, due to technological limitations. The scientists used an advanced microscopy technique called super-resolution imaging to “see,” in cells and in the brains of live mice and tracked how cholesterol regulates Aβ production.

They focused on cholesterol produced in the brain by essential helper cells called astrocytes, and saw it was carried by apoE proteins to the outer membranes of neurons. There, it appeared to help maintain clusters of cholesterol and related molecules colloquially referred to as “lipid rafts.” Lipid rafts are not yet well understood, in part because they are too tiny to image with ordinary light microscopes. With improved technology, they are increasingly appreciated as hubs where signaling molecules come together to carry out key cellular functions.

The protein from which Aβ is produced, APP, also sits in neuronal membranes. The researchers showed that apoE and its cholesterol cargo bring APP into contact with nearby lipid rafts. There, in the rafts, enzymes that cleave APP to form Aβ are found. They found that blocking the flow of cholesterol would take APP out of contact with lipid rafts, thereby effectively preventing Aβ production.

The scientists then did a series of experiments in aged “3xTg-AD” mice, which are genetically engineered to overproduce Aβ, to develop Aβ plaques, and broadly to model Alzheimer’s. They found that when they shut off astrocyte cholesterol production in the mice, Aβ production plummeted to near-normal, and Aβ plaques virtually disappeared. Another classic Alzheimer’s sign usually seen in these mice is the accumulation of tangled aggregates of a neuronal protein called tau—and those disappeared too.

By confirming and clarifying the role of astrocyte-produced cholesterol in Aβ production, the study suggests that targeting this process is worthy of exploration for potential to prevent Alzheimer’s progression.

Hansen notes, however, that cholesterol is needed by the brain for many other processes, including the maintenance of normal alertness and cognition. His laboratory discovered in a 2020 study that severely interrupting the effect of cholesterol in neurons by general anesthetics can induce unconsciousness via a shared mechanism.

“You couldn’t just eliminate cholesterol in neurons, cholesterol is needed to set a proper threshold for both Aβ production and normal cognition,” Hansen says.

The findings offer new evidence of the underlying factors advancing development of Alzheimer’s. A common variant of the apoE gene, known as the E4 variant, is the largest risk factor for late-onset Alzheimer’s, and Hansen and colleagues found evidence in the study that this variant, compared to the more common, lower-risk E3 variant, somehow boosts APP’s association with lipid rafts, which thus boosts Aβ production.

Hansen and his laboratory are currently studying how apoE’s transport of cholesterol and maintenance of lipid rafts in the brain impacts not only Aβ production but also brain inflammation—another feature of Alzheimer’s that contributes to destruction in the brain but has murky causes.

“There is the suggestion here of a central mechanism, involving cholesterol, that could help explain why both Aβ plaques and inflammation are so prominent in the Alzheimer’s brain,” Hansen says.

Competing interest statement: D.M.H. is an inventor on a patent licensed by Washington University to C2N Diagnostics on the therapeutic use of anti-tau antibodies. D.M.H. cofounded and is on the scientific advisory board of C2N Diagnostics. C2N Diagnostics has licensed certain anti-tau antibodies to AbbVie for therapeutic development. D.M.H. is on the scientific advisory board of Denali and consults for Genentech, Merck, Cajal Neuroscience, and Eli Lilly.

DOI: 10.1073/pnas.2102191118
Method of Research: Experimental study
Subject of Research: Animals
Article Title: Regulation of beta-amyloid production in neurons by astrocyte-derived cholesterol
Article Publication Date: 12-Aug-2021
COI Statement: Competing interest statement: D.M.H. is an inventor on a patent licensed by Washington University to C2N Diagnostics on the therapeutic use of anti-tau antibodies. D.M.H. cofounded and is on the scientific advisory board of C2N Diagnostics. C2N Diagnostics has licensed certain anti-tau antibodies to AbbVie for therapeutic development. D.M.H. is on the scientific advisory board of Denali and consults for Genentech, Merck, Cajal Neuroscience, and Eli Lilly.