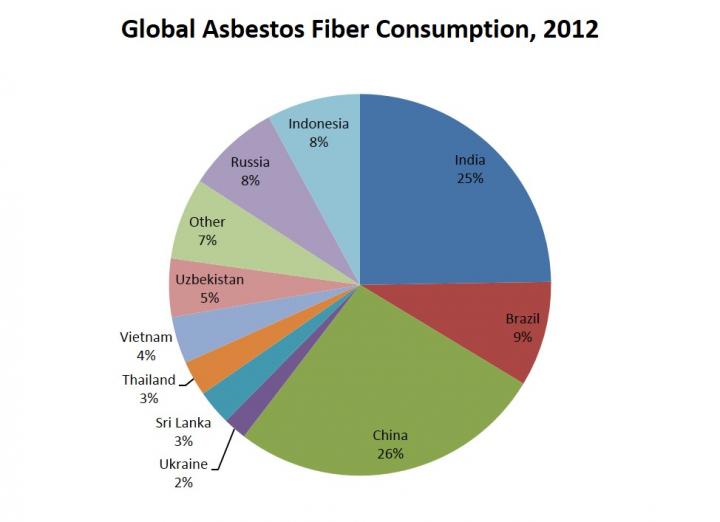 Challenges to global health can evolve from policies and decisions that take years or decades to unfold. An article in the current issue of the Annals of Global Health describes the current state of asbestos use worldwide, a story that began over 100 years ago, and the real and contrived controversies regarding asbestos.

At the peak of asbestos use in 1972 in the United States, more than 775,000 tons of asbestos were used, much of it by the construction trades and shipbuilding industry, in addition to the manufacturing of many consumer products. As the health risks associated with asbestos have become evident, more than 50 countries have banned asbestos, although India and the United States have not.

Major producers such as Russia, Kazakhstan, China, and Brazil continue to produce and export asbestos to countries around the world, especially to low- and middle-income countries that too often have weak or nonexistent occupational and environmental regulations.” They note that India produces little asbestos, but has become a major importer with exponential growth in manufacture of asbestos cement and pipes.

Asbestos minerals are divided into two groups, amphibole and serpentine, based on their chemistry and fiber morphology. The amphibole group includes crocidolite, amosite, tremolite, actinolite, and anthophyllite asbestos. The serpentine group is comprised solely of chrysotile asbestos, and it accounts for some 90% to 95% of all the asbestos used worldwide.

The now disproven belief that chrysotile asbestos is safe and the actions of the governments of Canada and India to support asbestos production in the face of strong epidemiological data show that this is not a strictly science-driven issue. Canada has recently had a turnabout and will likely exit the asbestos business, but India remains recalcitrant.

Dr. Frank and Dr. Joshi report on how the global spread of asbestos is changing but that there are still examples of flawed science being used to justify continued use. They suggest that, because of economic issues for asbestos producers, there “are far more insidious actions that follow a pattern first established by the tobacco industry in hiring public relations firms to obfuscate the scientific issues so that tobacco could still be sold…Similarly, the asbestos industry adopted the view that a public relations campaign was needed to quash the rising concerns about its health hazards.”

The authors caution that eventually the truths regarding asbestos exposure and its true hazards will be recognized and acted upon, but only after economic forces are overcome.