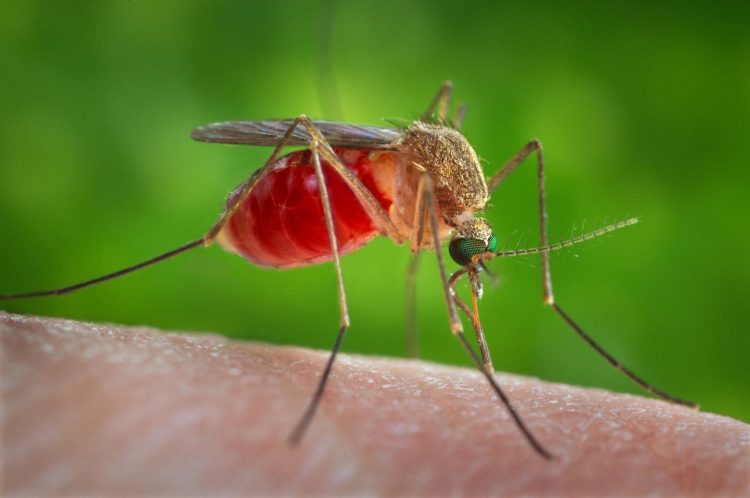 Mosquitoes are known to infect people and animals with West Nile virus. Studying West Nile virus infection in mice, scientists at Washington University School of Medicine in St. Louis have shown that an antiviral compound tightens the blood-brain barrier, making it harder for the virus to invade the brain. Credit: Centers for Disease Control and Prevention

Studying West Nile virus infection in mice, scientists at Washington University School of Medicine in St. Louis showed that interferon-lambda tightens the blood-brain barrier, making it harder for the virus to invade the brain.

Interferon-lambda is produced naturally in the body in response to infection, but the new research suggests that larger amounts of the antiviral compound may tighten the blood-brain barrier against pathogens or possibly even faulty immune cells that can attack the brain and cause conditions such as multiple sclerosis.

By blocking interferon-lambda's receptors in the brain, it may be possible one day to open the barrier to chemotherapies to treat specific diseases in the brain, such as tumors. Such tumors now are not optimally treated with chemotherapy drugs because the drugs can't cross the blood-brain barrier.

“We have identified a new antiviral function of interferon-lambda that doesn't involve directly attacking a virus but stems viral invasion into the brain,” said co-senior author Robyn Klein, MD, PhD, professor of medicine. “This suggests the possibility of multiple new applications. We're testing one of these right now, conducting studies in mice to see if interferon-lambda can help prevent brain inflammation in a mouse model of multiple sclerosis.”

Other forms of interferon have shown potential for influencing the blood-brain barrier, but interferon-lambda may have significantly fewer side effects.

Infections with West Nile virus occur globally. No treatments exist for the virus, which crosses the blood-brain barrier in an estimated 1 percent of infected people, causing a debilitating neurological condition that can be fatal.

Klein and co-senior author Michael Diamond, MD, PhD, professor of medicine, looked closely at West Nile virus infections in mice to learn more about how viruses cross the blood-brain barrier. This barrier typically keeps large molecules, such as immune cells, drugs and pathogens, out of the brain while letting in essential nutrients such as glucose.

In earlier research, Klein showed that West Nile virus can open the blood-brain barrier to enter the central nervous system, but that the barrier usually quickly closes, preventing immune molecules from following to attack the virus.

In the new study, the scientists studied mice that lacked the interferon-lambda receptor. Compared with normal mice, the mice without the receptor had higher levels of West Nile virus in the brain. The researchers found the blood-brain barrier was much more permeable to the virus in these mice, suggesting that loss of the receptor through which interferon-lambda acts had loosened the barrier.

“Viruses are most dangerous when they enter the brain,” said Diamond. “Compared with untreated mice, we found significantly lower concentrations of the virus in the brain among mice treated with interferon-lambda.”

If further studies of interferon-lambda prove fruitful in stemming the spread of viruses to the brain, a major hurdle remains. By the time symptoms of viral infections are serious, the virus is already in the brain. This reality suggests earlier diagnosis is critical.

But, the researchers note, interferon-lambda may be a better way to influence what gets into the brain than other forms of interferon, which are associated with significant side effects such as fever, chills and fatigue.

“Interferon-lambda has significantly fewer receptors in the body, which may mean using it as a treatment is likely to have fewer side effects,” Diamond said. “It's also possible that interferon-lambda may influence other protective barriers in the body, such as those in the skin and the gut, an area of research my laboratory is investigating.”