Home / Health and Medicine / A common ancestor for cells involved in hearing and touch
13.07.2021

A common ancestor for cells involved in hearing and touch 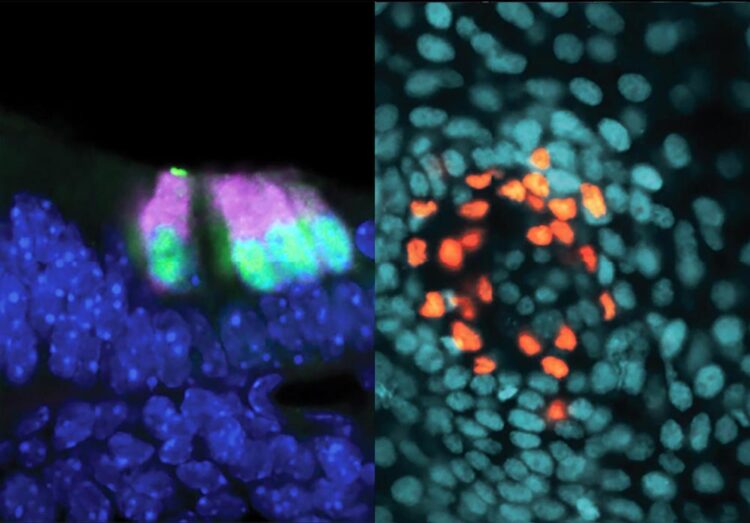 USC Stem Cell scientists point to developmental and evolutionary similarities between sensory cells in the inner ear and the skin.

The sensory cells in the inner ear and the touch receptors in the skin actually have a lot in common, according to a new study from the USC Stem Cell laboratory of Neil Segil published in the Proceedings of the National Academy of the Sciences (PNAS).

“There are striking similarities in the development of two types of specialized sensory cells: the so-called ‘hair cells’ that receive sound vibrations in the inner ear, and the Merkel cells that sense light touch at the surface of the skin,” said Segil, who is a Professor in the Department of Stem Cell Biology and Regenerative Medicine, and the USC Tina and Rick Caruso Department of Otolaryngology – Head and Neck Surgery. “Ultimately, these developmental similarities are a legacy of shared evolutionary history. This demonstrates how the story of evolutionary developmental biology, or ‘evo devo,’ also extends to what we call the ‘epigenetic level’–or how genes are regulated.”

In order to begin the process of differentiation, the right parts of a stem cell’s DNA need to be taken out of storage. Each human cell can store around six feet of DNA in its nucleus, because this DNA is wound around tiny “spools” made up of proteins called histones. These spools of DNA and histone protein are further packed together to form what are known are nucleosomes, which are stacked to create chromatin, which is the material that makes up the chromosomes.

When DNA is wound tightly into this storage configuration, the chromatin is closed and inaccessible to the protein ATOH1. This protein is a “master regulator” that can activate a network of differentiation genes in the DNA within the chromatin–but not without first gaining access.

To this end, ATOH1 stimulates the production of a second protein known as POU4F3, an aptly named “pioneer factor” with the ability to venture into new frontiers by binding to closed and inaccessible chromatin. After POU4F3 blazes a trail by binding to the closed chromatin, ATOH1 is able to move forward with engaging and activating the network of genes that drives differentiation into hair cells and Merkel cells.

Strikingly, there is significant overlap in the specific regions of chromatin that POU4F3 makes accessible to ATOH1 in hair cells and Merkel cells.

“It’s remarkable that these two cell types, which are both involved in sensing mechanical stimuli but derive from distinct parts of the embryo, both rely on the same ATOH1/POU4F3 mechanism in order to differentiate,” said Segil. “Our study suggests that this mechanism is extremely ancient, and emerged before hair cells and Merkel cells diverged from a common evolutionary ancestor–an ‘ur-mechanoreceptor’ cell type.”

Additional co-authors of the study include Juan Llamas, Xizi Wang, John D. Nguyen and Talon Trecek in the Segil Lab at USC.

Major support for this research came from the National Institute on Deafness and Other Communication Disorders (R01DC015829, R01DC015530, T32DC009975, F31DC017376, F31DC018703) and the Eunice Kennedy Shriver National Institute of Child Health and Human Development (T32HD060549). Additional support came from the Hearing Restoration Project of the Hearing Health Foundation.