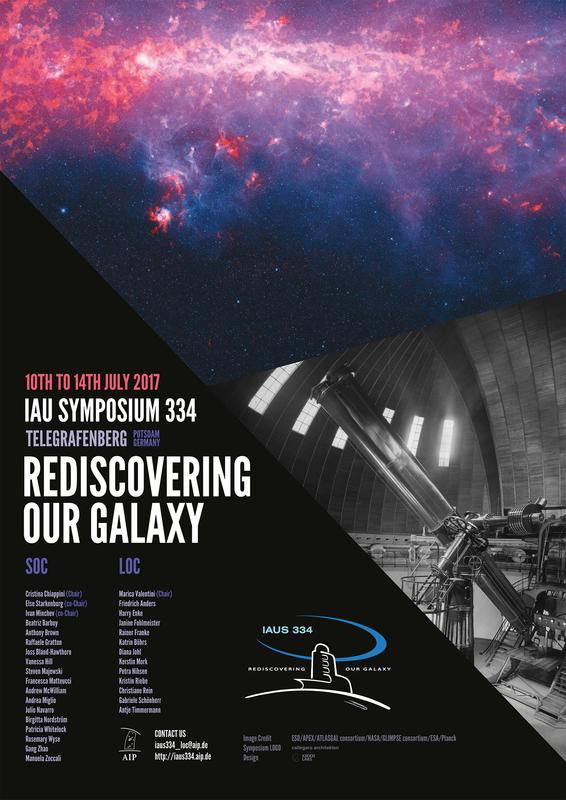 From the chemical composition to the motion and the ages of stars: in contrast to galaxies that are far away, researchers can study the Milky Way in detail and, thus, reconstruct its formation history and evolution. The participants of the international IAU Symposium 334 on the Telegrafenberg in Potsdam will discuss open questions and talk about concepts emerging from the analysis of new, large, and complex datasets.

“In the last decade we have stepped out of the solar vicinity with various surveys and new observational methods, starting to unveil the inner- and outermost regions of the Milky Way”, says AIP researcher and chair of the scientific organizing committee Dr. Cristina Chiappini. “Therefore, we are at a crucial point in our understanding of the Milky Way where our knowledge is growing rapidly. We need to be prepared for the even larger data coming next year with the second data release from the Gaia satellite, and discuss how to establish advanced models of the Milky Way formation and evolution.”

“The conference is organized in nine sections, going from the most pristine fossil records traced by the oldest stars in our Galaxy, to other tracers sampling the different galactic components”, says AIP researcher and chair of the local organizing committee Dr. Marica Valentini. Further topics include stellar models, and how stars of different masses contribute to the chemical enrichment of our Galaxy along the more than 12 billion years of evolution, and cosmological simulations of galaxies that are similar to the Milky Way.

On Wednesday, 12 July 2017, as a special highlight, children from a public bilingual elementary school, the Europa-Schule Neues Tor in Berlin, will join the symposium and learn more about astronomy and the history of their home galaxy.

The IAU promotes astronomy through international cooperation and organises scientific meetings. Each year, the IAU sponsors nine international IAU symposia. In the last 25 years, only eight international IAU symposia took place in Germany – three of these were held in Potsdam, the most recent one in the year 2000. After 17 years, the IAU now returns to Germany with a symposium thanks to a successful application led by Cristina Chiappini, and co-chaired by Dr. Ivan Minchev and Dr. Else Starkenburg. The upcoming symposium confirms the leading role of the AIP in the research field of Galactic archaeology.

The key areas of research at the Leibniz Institute for Astrophysics Potsdam (AIP) are cosmic magnetic fields and extragalactic astrophysics. A considerable part of the institute's efforts aim at the development of research technology in the fields of spectroscopy, robotic telescopes, and e-science. The AIP is the successor of the Berlin Observatory founded in 1700 and of the Astrophysical Observatory of Potsdam founded in 1874. The latter was the world's first observatory to emphasize explicitly the research area of astrophysics. The AIP has been a member of the Leibniz Association since 1992.