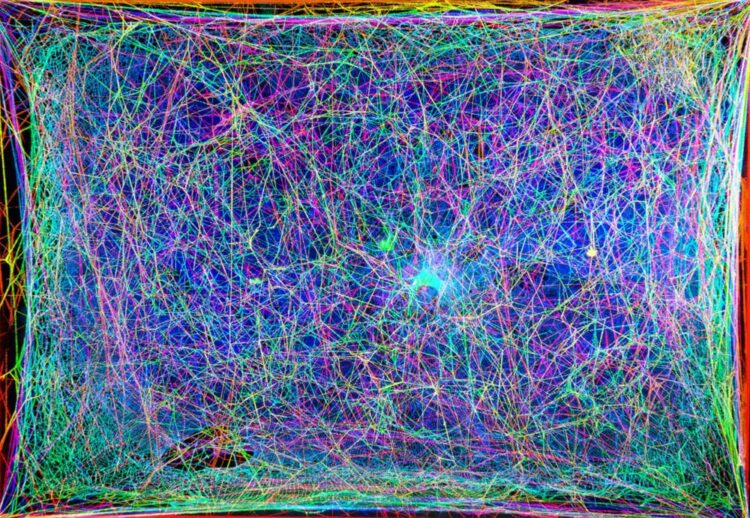 Cross-sectional images (shown in different colors) of a spider web were combined into this 3D image and translated into music.
Credit: Isabelle Su and Markus Buehler

Spiders are master builders, expertly weaving strands of silk into intricate 3D webs that serve as the spider’s home and hunting ground. If humans could enter the spider’s world, they could learn about web construction, arachnid behavior and more. Today, scientists report that they have translated the structure of a web into music, which could have applications ranging from better 3D printers to cross-species communication and otherworldly musical compositions.

The researchers will present their results today at the spring meeting of the American Chemical Society (ACS). ACS Spring 2021 is being held online April 5-30. Live sessions will be hosted April 5-16, and on-demand and networking content will continue through April 30. The meeting features nearly 9,000 presentations on a wide range of science topics.

“The spider lives in an environment of vibrating strings,” says Markus Buehler, Ph.D., the project’s principal investigator, who is presenting the work. “They don’t see very well, so they sense their world through vibrations, which have different frequencies.” Such vibrations occur, for example, when the spider stretches a silk strand during construction, or when the wind or a trapped fly moves the web.

Buehler, who has long been interested in music, wondered if he could extract rhythms and melodies of non-human origin from natural materials, such as spider webs. “Webs could be a new source for musical inspiration that is very different from the usual human experience,” he says. In addition, by experiencing a web through hearing as well as vision, Buehler and colleagues at the Massachusetts Institute of Technology (MIT), together with collaborator Tomás Saraceno at Studio Tomás Saraceno, hoped to gain new insights into the 3D architecture and construction of webs.

With these goals in mind, the researchers scanned a natural spider web with a laser to capture 2D cross-sections and then used computer algorithms to reconstruct the web’s 3D network. The team assigned different frequencies of sound to strands of the web, creating “notes” that they combined in patterns based on the web’s 3D structure to generate melodies. The researchers then created a harp-like instrument and played the spider web music in several live performances around the world.

The team also made a virtual reality setup that allowed people to visually and audibly “enter” the web. “The virtual reality environment is really intriguing because your ears are going to pick up structural features that you might see but not immediately recognize,” Buehler says. “By hearing it and seeing it at the same time, you can really start to understand the environment the spider lives in.”

To gain insights into how spiders build webs, the researchers scanned a web during the construction process, transforming each stage into music with different sounds. “The sounds our harp-like instrument makes change during the process, reflecting the way the spider builds the web,” Buehler says. “So, we can explore the temporal sequence of how the web is being constructed in audible form.” This step-by-step knowledge of how a spider builds a web could help in devising “spider-mimicking” 3D printers that build complex microelectronics. “The spider’s way of ‘printing’ the web is remarkable because no support material is used, as is often needed in current 3D printing methods,” he says.

In other experiments, the researchers explored how the sound of a web changes as it’s exposed to different mechanical forces, such as stretching. “In the virtual reality environment, we can begin to pull the web apart, and when we do that, the tension of the strings and the sound they produce change. At some point, the strands break, and they make a snapping sound,” Buehler says.

The team is also interested in learning how to communicate with spiders in their own language. They recorded web vibrations produced when spiders performed different activities, such as building a web, communicating with other spiders or sending courtship signals. Although the frequencies sounded similar to the human ear, a machine learning algorithm correctly classified the sounds into the different activities. “Now we’re trying to generate synthetic signals to basically speak the language of the spider,” Buehler says. “If we expose them to certain patterns of rhythms or vibrations, can we affect what they do, and can we begin to communicate with them? Those are really exciting ideas.”

A press conference on this topic will be held Monday, April 12, at 2 p.m. Eastern time online at http://www.acs.org/acsspring2021conferences.

The researchers acknowledge support and funding from the MIT Center for Art, Science & Technology; the National Institutes of Health; the Office of Naval Research; Studio Tomás Saraceno; the National Science Foundation; MathWorks Engineering Fellowship; and the Army Research Office.

The American Chemical Society (ACS) is a nonprofit organization chartered by the U.S. Congress. ACS’ mission is to advance the broader chemistry enterprise and its practitioners for the benefit of Earth and its people. The Society is a global leader in providing access to chemistry-related information and research through its multiple research solutions, peer-reviewed journals, scientific conferences, eBooks and weekly news periodical Chemical & Engineering News. ACS journals are among the most cited, most trusted and most read within the scientific literature; however, ACS itself does not conduct chemical research. As a specialist in scientific information solutions (including SciFinder® and STN®), its CAS division powers global research, discovery and innovation. ACS’ main offices are in Washington, D.C., and Columbus, Ohio.

Spiders are abundantly found in nature, making up more than 47,000 species. This ecological success is in part due to the exceptional mechanics of the spider web, with its strength, toughness, elasticity and robustness. To survive in different environments, spiders have adapted their web by providing housing, protection, and as a tool for catching prey. The spatial network and microscale size of silk fibres are significant challenges towards determining the topology of 3D webs, and only a limited number of previous studies have attempted to quantify their structure and properties. Here, we focus on developing an innovative experimental method to directly capture the complete digital 3D spider web architecture with micron scale resolution. We built an automatic segmentation and scanning platform to obtain high-resolution 2D images of cross-sections of the web illuminated by a sheet laser and developed image processing algorithms to reconstruct the digital 3-D fibrous network by analysing the 2-D images. This network provides a model that contains all of the structural and topological features of the porous regions of a 3-D web with high fidelity, and when combined with a mechanical model of silk materials, allows us to simulate and predict the mechanical response of a 3D web. To allow novel interpretations of the key features of the spider web, we translate complex 3-D data from the original web model into sound, using data sonification. Paired with a visual representation using VR, the resulting audio allows a unique immersion into the web that can describe features of the 3-D architecture as a function of spatial location in the web. The transformation of sound from grains to musical arrangements (melody, rhythm, harmony, chords, etc.) is analogous to the natural bottom-up design of proteins, resembling the design of sequence and higher-level hierarchical protein materials.

Becoming a flagship of the UV LED community – ICULTA 2021