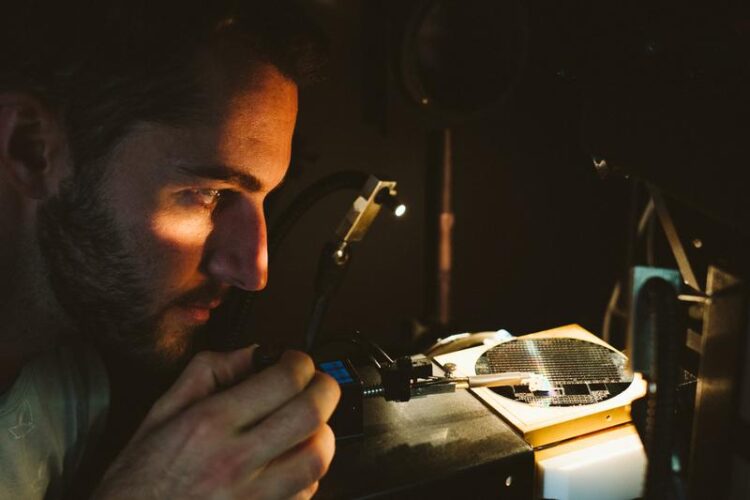 With the tandem solar cell made of silicon and III-V semiconductor materials, a more energetically efficient use of the solar spectrum is possible, compared to conventional solar cells available today.

The Focus of Fraunhofer ISE at the EU PVSEC Conference

Higher efficiencies for solar cells and thus a faster expansion of photovoltaics and an acceleration of the energy transition – This is the objective of the researchers at Fraunhofer ISE when working on tandem photovoltaics. They will present the latest results of their work on tandem solar cells of different material classes at the European Photovoltaic Solar Energy Conference and Exhibition EU PVSEC, which will be held online from September 7-11, 2020.

Reducing the cost of solar power and increasing efficiency has always been a major motivation in solar cell research. Since the efficiency of the market-dominant silicon technology – whose continuous development has led to solar electricity prices of less than 5 eurocents per kilowatt hour even in Germany today – is nearing its theoretical limit, numerous research institutions are currently pursuing the tandem approach.

This involves combining different semiconductor materials to form a tandem of two or more solar cells in order to make better use of the solar spectrum. Each of the materials used converts a different region of the solar spectrum into electrical energy. For solar cells made of only silicon, the physical-theoretical limit is around 29 percent. Research and industry have already reached the economically feasible limit here with industrial-standard solar cell efficiencies of 26 percent.

“In our research on tandem photovoltaics at Fraunhofer ISE, we are pursuing the approach of combining a silicon base cell with III-V semiconductors or perovskites to form a monolithic tandem solar cell, which subsequently looks no different from a cell consisting solely of silicon,” says Prof. Dr. Stefan Glunz, head of the Photovoltaics Research Division at Fraunhofer ISE. “By utilizing the properties of both layers, we can achieve significantly higher efficiencies. In our new Center for High Efficiency Solar Cells soon to be completed, we will have state-of-the-art clean room equipment with which we can meet the challenges of the rapidly developing tandem photovoltaics even better.”

By combining silicon with III-V semiconductors, Fraunhofer ISE has already achieved an efficiency of 34.5% – far above the efficiency limit of simple single-junction solar cells. – achieved. Recently, great progress has also been made in direct growth of III-V semiconductors. Another promising approach being pursued at Fraunhofer ISE is the combination of perovskites with silicon, where great progress has recently been made.

The Freiburg researchers not only develop tandem solar cells but also carry out research along the entire value chain, from the cells to the modules including the respective production technology. Many years of experience and expertise from PV-TEC and Module-TEC come into play for the applications of the technology, for example in integrated photovoltaics. All process steps are accompanied by characterization, calibration and life cycle tests. With the CalLab PV Cells, the CalLab PV Modules and the TestLab PV Modules, the Institute has the world’s leading accredited calibration and test laboratories.

“The high energy yield of tandem solar cells and modules makes it possible to have PV installations with higher output on smaller areas. Thus, tandem photovoltaics can make an important contribution to the photovoltaic expansion which is necessary to achieve the climate protection targets, while contributing to even greater sustainability of this key technology of the energy transition at the same time,” says Institute Director Prof. Dr. Andreas Bett.

Presentations at the EU PVSEC
With more than 70 lectures and poster presentations – not only on tandem photovoltaics, but also on other R&D topics – researchers from Fraunhofer ISE will be presenting online at the European Photovoltaic Solar Energy Conference EUPVSEC from September 7 to 11, 2020. Both the conference and the accompanying exhibition will take place online this year due to the Corona pandemic.

https://www.ise.fraunhofer.de/en/events-and-trade-fairs/eu-pvsec.html Link to the Fraunhofer ISE lectures at the EU PVSEC