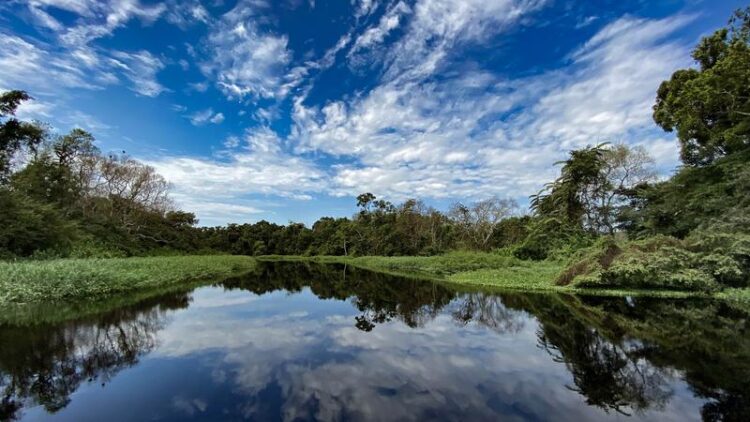 A small tributary to the Congo River in the so-​called Cuvette Centrale, a large depression of the Congo Basin characterized by swamps and wetlands
Photograph: M. Barthel / ETH Zurich

The Congo Basin is the second largest contiguous tropical forest area on earth. Even though it is so vast and plays such a major role in the global climate system, there is no empirical data on the forest’s gas exchange with the atmosphere. Especially with regard to the greenhouse gases nitrous oxide and methane, research is still in the dark.

Other tropical forests are known to be a major source of nitrous oxide and a sink for methane. But because comparable data are lacking for the Congo, the study of how these greenhouse gases behave there has so far been limited to modelling . The data used for the models comes from the Amazon, Indonesia and the tropical part of Australia; thus scientists assumed until today that the Congo Basin behaved similarly to these other tropical forests.

Now, an international research team led by ETH Professor Johan Six has partly filled this blank spot. In an elaborate and difficult measurement campaign lasting several years, the scientists determined how much methane and nitrous oxide the tropical forest of the Congo Basin absorbs or releases. Their study – one of the first available on the subject for that part of the world – has just been published in the journal Nature Communications.

This shows for the first time that the gas fluxes of the tropical forests of the Congo Basin differ from those of other tropical regions of the world. For example, nitrous oxide emissions from the forest are comparatively low. “This was unexpected,” says Matti Barthel, a research associate with Six and the study’s lead author. “Our measurements from both the first short measurement campaigns and subsequent long-​term studies didn’t confirm the model assumptions,” he says.

The situation is different for methane. According to the models, the Congo Basin should be a methane sink. The ETH researchers were able to confirm this for the montane and lowland tropical forests. However, because the much smaller swamp forests of the Congo Basin periodically emit enormous amounts of this greenhouse gas, the Congolese tropical forest as a whole seem to be a source of methane. During the rainy season, swamp forests emit up to 1,500 times more methane than during the dry season, negating the sink capacity of the other two forest types.

To understand why the Congo Basin forest behaves differently with respect to these climate gases, the researchers “looked into the soil,” as Six says. In one study, they studied microorganisms and their functions, and for another, the isotopic composition of the nitrogen in the nitrous oxide. Both studies suggest that soil microbes convert most nitrous oxide to gaseous nitrogen (N2) in order to generate energy for their metabolism. This removes this potent greenhouse gas from the atmosphere. N2 itself is harmless – it makes up 80 percent of the atmosphere.

For this study, the ETH researchers conducted the first ever gas measurements in the Congo Basin. “Africa is underrepresented in such climate gas measurements, and the Congo Basin is particularly poorly researched,” Barthel says. To his knowledge, there is only one study for this area, dating from 1963, by Belgian researchers. Not only did research in Zaire, now the Democratic Republic of Congo, collapse almost completely after Mobutu took power, but the huge equatorial country is still rather poorly accessible and its infrastructure is in a parlous state.

Professor Six began the preliminary work for this study in 2008/09, taking part in two expeditions to the Congo River. Given the results from these two expeditions, he asked Barthel to study the flow of gas from this tropical forest – a missing piece in the global carbon cycle puzzle. Barthel conducted initial measurements in 2016 as part of a two-​month scouting expedition. This expedition took him to the Kivu region in the eastern Democratic Republic of Congo. The data analyses showed him that surprisingly little nitrous oxide was escaping into the atmosphere from the montane forest.

Permanent observations carried out for the first time

In subsequent years, Barthel and local scientists set up two permanent monitoring stations, one in the region around Kisangani, the other in Kahuzi-​Biéga National Park, eastern Congo. There, gas exchange between the atmosphere and the ground was then measured during several 7- to 14-​day measurement campaigns throughout the year.

From 2019 to 2020, the researchers operated an additional measurement station in the western part of the country, in the swamp forests of what is known as the Cuvette Centrale. “Methane emissions there were exorbitant at times,” Barthel says. These swamp forests occupy only about 7 percent of the total tropical forest area in the Congo Basin, but emit such a large amount of methane that it more than compensates for the negative emissions of the rest of the forest, the researcher says.

“During the first scouting expedition, we quickly realised that we wouldn’t be able to use high-​tech measuring equipment,” Barthel says, adding that the general supply situation is too poor, with no way to obtain spare parts if anything broke. The power supply is also not stable, he says, “so we worked with devices that are as easy to use, reliable and robust as possible, and that can run on batteries.”

Not a single probe was lost

Researchers from local universities supervised the measuring stations. Local employees also took gas samples, filled them into vials and sent them to Zurich for laboratory analysis. Of the more than 6,500 samples, not a single one was broken or lost during transport. “That’s almost a miracle, because often the cardboard boxes in which the tubes were sent on their journey definitely looked the worse for wear” the ETH researcher says with a smile.