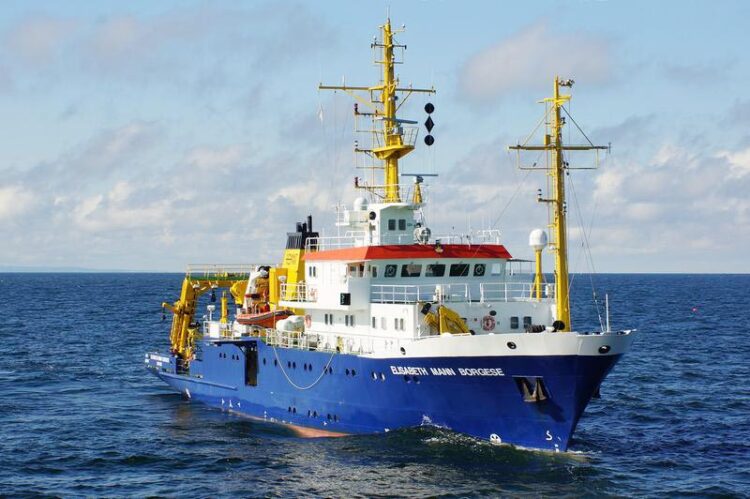 Scientists from Rostock and Prague trace ship emissions over and in the Baltic Sea.

Ship exhausts generated over the heavily trafficked Baltic Sea affect the marine environment and human health. Within the “PlumeBaSe”* project, researchers from the Leibniz Institute for Baltic Sea Research Warnemünde (IOW), the University of Rostock and the Charles University in Prague are now investigating how the emitted pollutants spread above and in the sea, how they change in the air and in the water, and what can be inferred from this for improved exhaust gas cleaning. The three-year research project will kick off in mid-September with a first test cruise on the IOW research vessel “Elisabeth Mann Borgese”.

Every day, the arrivals and departures of freighters and ferries, of small motorised sailing ships and huge cruise liners can be observed in Warnemünde. What is important for Rostock as a business and tourism location and ultimately for the Baltic Sea’s entire economic region is a major problem, both, for the Baltic marine ecosystems and for the population living near the coast: The combustion of heavy fuel oil or marine diesel oils by the sometimes enormous ship engines releases large amounts of harmful substances. In addition to gaseous pollutants such as toxic nitrogen oxides (which are also harmful to the climate), liquid or solid aerosols rich in trace metals and organic toxins are also released.

Since 2015, the Baltic Sea has been a sulfur emission control area and therefore heavy oil combustion without so-called wet sulfur scrubbers is significantly restricted. However, initial studies by the University of Rostock, the Helmholtz Zentrum München and the IOW show that banning heavy fuel oil in coastal shipping is less effective for human health protection than expected and that scrubbers do little to reduce emissions of harmful fine particulate matter.

The goal of the “PlumeBaSe”* research collaboration, which was launched at the beginning of September and builds on the previous studies, therefore is to conduct a very detailed analysis of the pollutants released as aerosols during fossil fuel combustion by ships – to study their composition as well as and their further transport and pathways in the marine environment. “We hypothesize that ship emissions contribute significantly to surface water pollution and that inputs are particularly high along major shipping routes. However, our understanding of how the solid and liquid particles in ship exhaust ‘age’ during atmospheric transport as well as in the water column – that is, how they change due to UV radiation or reactive oxygen species such as ozone – is extremely incomplete,” states Helena Osterholz, the PlumeBaSe coordinator on the IOW side.

“However, in order to investigate the extent, to which ship exhaust is harmful to marine life, the transformation products must also be studied,” adds Ralf Zimmermann, project coordinator at the University of Rostock, adding: “With PlumeBaSe, we are now bridging the gap between atmospheric and marine research in novel ways to achieve high-resolution sampling of aerosols and their transformation products from the ship’s smokestack right to the Baltic Sea.”

*) short for: Tracing of ship plumes and impact to seawater; Project funding by the German Research Foundation DFG and the Czech Science Foundation, GACR

This will be possible, among other things, through the use of a remote-controlled zeppelin that will perform field measurements of aerosol dispersion directly in the ship’s exhaust plume at various locations over the water and in an altitude profile. This method, which allows to take samples and simultaneously record the concentration and size distribution of aerosols as well as measure the accompanying meteorological data, was developed at Charles University in Prague and will be employed in the main PlumeBaSe field campaign in 2023. During the upcoming September 2022 test cruise, a single-particle aerosol mass spectrometer will be tested at sea for the first time, which can directly analyse individual airborne fine dust particles. This method was developed at the University of Rostock. PlumeBaSe is also supported by the Bundeswehr University Munich via the project “LUKAS – Mobile Warning System for Air Pollutants”, in which single-particle aerosol mass spectrometers are used in a coupled manner (Prof. Thomas Adam) and which also contributes land-based measurements.

The upcoming 36-hour test cruise with the research vessel “Elisabeth Mann Borgese”, will start on September 14 from Rostock with Helena Osterholz from the IOW as chief scientist. On board is a 10-member German-Czech team with researchers from all project partner institutions. The cruise will prepare the ground for detailed, longer aerosol measurements on the open sea next year, which will also include pollutant measurements in the water column. “The Baltic Sea, with its high shipping traffic density, good accessibility and clearly regulated ship emissions provides an ideal setting for our work. If all measurement systems function according to plan, we also expect that our findings can be used to model the impact of shipping traffic on nearshore oceans worldwide,” the two project coordinators conclude.