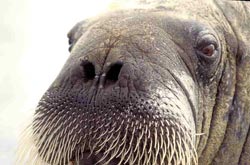 An old bull walrus, one of the hundreds of winsome and wacky sea animals protected under the Marine Mammal Protection Act. New UVM research shows that 40 years after it was passed, the law works. (Photo: Ansgar Walk, 1999, via Wikimedia Commons) <br>

The committee also worried about how tuna fishing was accidentally killing thousands of dolphins, trapped in fishing gear. And they considered reports about seal hunting and the decline of other mammals, including sea otters and walruses.

In October of that year, Congress passed the Marine Mammal Protection Act. Four decades later, new research shows that the law is working.

Their study, published online on March 22, in the Annals of the New York Academy of Sciences, shows that population trends for most stocks of these animals remain unknown, but of those stocks that are known, many are increasing.

“At a very fundamental level, the MMPA has accomplished what its framers set out to do,” says co-author Andrew Read, professor of marine biology at Duke University, “to protect individual marine mammals from harm as a result of human activities.”

Some marine mammals, like endangered right whales, continue to be in deep trouble, but other populations “particularly seals and sea lions, have recovered to or near their carrying capacity,” the scientists write.

“We have seen remarkable recoveries of some populations of marine mammals, such as gray seals in New England and sea lions and elephant seals along the Pacific coast,” says Read.

“U.S. waters are pretty compromised with lots of ship traffic and ship strikes, big fisheries, pollution, boat noise, “ Joe Roman says. “And yet it’s safer to be a marine mammal in U.S. waters than elsewhere,” he says, due to the Act’s strong protections against commercial and accidental killing — what the law calls “take” — and its aim to maintain sustainable populations of mammals and their ecological roles in oceans.

“It’s important to evaluate such broad legislation,” says Caitlin Campbell ’12, an Environmental Sciences graduate from UVM’s College of Arts & Sciences, and a co-author on the paper.

“A lot of people think that the hard part was getting it passed through Congress, but in reality you have to make sure that big protective measures like this actually are effective,” she says. “This paper shows that this act is doing its job.”

The research team — Campbell; Joe Roman in UVM’s Gund Institute for Ecological Economics; Irit Altman from Boston University; Meagan Dunphy-Daly and Andrew Read from Duke University; and Michael Jasny from the Natural Resources Defense Council — gathered hundreds of data sets from around the world, including from NOAA, Canadian agencies, and the IUCN. Their goal was to get an accurate picture of population levels and trends of more than two hundred stocks of marine mammals from the Pantropical Spotted Dolphin to the West Indian Manatee.

The team concluded that for many of these animals there simply aren't enough data. For seventy-one percent of the stocks they identified, they couldn’t say which way the population was heading, up or down. “There isn’t enough research,” Roman says.

Another fundamental conclusion of this research: “stopping harvesting these mammals, stop fisheries bycatch, stop killing them — and many populations bounce back,” says Roman. Marine mammals are long-lived “so it’s going to take decades, maybe longer for populations to rebound,” he says, “but it seems the trends are increasing.”

In 1934, trends were definitely not increasing for right whales, when an international treaty banned hunting these nearly extinguished creatures. But other protections lagged, and by the 1960s many whales and other marine mammals — including some dolphins and seals — faced plummeting populations and the risk of extinction.

Yet in the early 1970s, the U.S. Department of Defense resisted legislation to protect whales and other marine mammals: they relied on sperm whale oil for use as a lubricant in submarines and other military engines, Roman’s team writes.

In one curious part of the complex negotiations at the White House, Lee Talbot, a canny scientist working for Richard Nixon, produced an affidavit from the DuPont Corporation stating that they could produce an artificial lubricant that could do the same job as the whale oil. This helped make the Pentagon more receptive toward whale-protecting legislation. In October 1972, the Marine Mammal Protection Act passed. This victory was also a key step toward the passage of the more forceful (though less ecologically oriented) Endangered Species Act that passed the next year.

Under these two laws, “countless tens of thousands of individual whales, seals, and manatees have been protected from harm since 1972,” the scientists write, “exactly as intended by those who crafted the legislation.”

In 1994, major amendments to the MMPA established a new framework for dealing with interactions between marine mammals and commercial fisheries, “which remains perhaps the most important conservation issue facing these iconic animals,” says Andrew Read.

This new framework, relies on “a negotiated rule-making process,” Read says, looking for solutions to the incidental death of mammals in commercial fisheries. One of the strengths of the new process is that it “requires the direct involvement of fishermen, conservationists and scientists in the management process,” Read says.

Still, some deeply depleted species, like right whales, may never recover, and additional threats beyond direct killing remain. The Marine Mammal Protection Act has generally been ineffective in dealing with problems like increasing underwater noise from naval operations and other ships, new diseases, and depleted prey species in fraying food webs. “Existing conservation measures have not protected large whales from fisheries interactions or ship strikes in the northwestern Atlantic,” the team writes.

And this points to a new generation of challenges such as moving shipping lanes in whale feeding territory, slowing speed boats in manatee habitat, changing lobster fishing technologies and other fishing gear modifications, and continuing to improve ecosystem-based fisheries management. “That’s going to be hard and require real political will,” Joe Roman says.

Microplastic pollution linger in rivers for years before entering oceans