Scientists uncover the key to adaptation limits of ocean dwellers 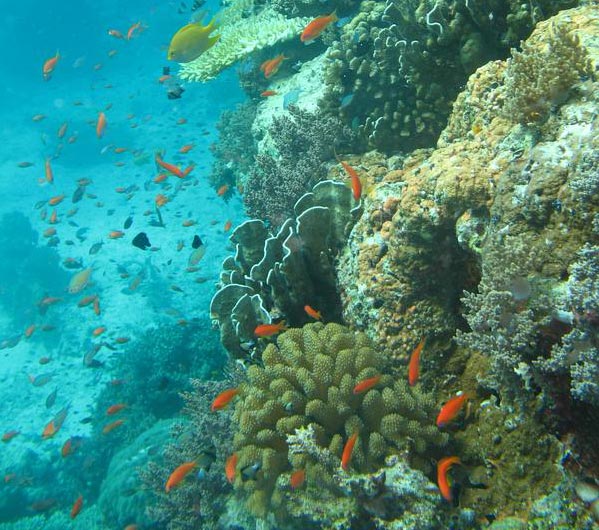 For the first time biologists studied the relationship between the complexity of life forms and the limits of their adaptation to a warmer climate. While unicellular bacteria and archaea are able to live even in hot, oxygen-deficient water, marine inhabitants with a more complex structure, such as animals and plants, reach their growth limits at the latest at a water temperature of 41 degrees Celsius. This temperature threshold seems to represent an insurmountable obstacle for their highly developed metabolic systems.

The current IPCC Assessment Report shows that marine life forms respond very differently to the increasing water temperature and the decreasing oxygen content of the ocean. “We now asked ourselves why this is so. Why do bacteria, for example, still grow at temperatures of up to 90 degrees Celsius, while animals and plants reach their limits at the latest at a temperature of 41 degrees Celsius,” says Dr. Daniela Storch, biologist in the Ecophysiology Department at the Alfred Wegener Institute (AWI) and lead author of the current study.

Since years Storch and her colleagues have been investigating the processes that result in animals having a certain temperature threshold up to which they can develop and reproduce. The scientists found that the reason for this is their cardiovascular system. They were able to show in laboratory experiments that this transport system is the first to fail in warmer water.

Heart, blood and circulation supply all cells and organs of a living organism with oxygen, but can only do so up to a certain maximum temperature. Beyond this threshold, the transport capacity of this system is no longer sufficient; the animal can then only survive for a short time. Based on this, the biologists had suspected at an early date that there is a relationship between the complex structure of an organism and its limited ability to continue to function in increasingly warm water.

“In our study, therefore, we examined the hypothesis that the complexity could be the key that determines the adaptability of diverse life forms, from archaea to animals, to different living conditions in the course of evolutionary history. That means: the simpler the structure of an oceanic inhabitant, the more resistant it should be,” explains the biologist. If this assumption is true, life forms consisting of a single simply structured cell would be much more resistant to high temperatures than life forms whose cell is very complex, such as algae, or whose bodies consist of millions of cells. Hence, the tolerance and adaptability thresholds of an organism would always be found at its highest level of complexity. Among the smallest organisms, unicellular algae are the least resistant because they have highly complex cell organelles such as chloroplasts for photosynthesis. Unicellular animals also have cell organelles, but they are simpler in their structure. Bacteria and archaea entirely lack these organelles.

To test this assumption, the scientists evaluated over 1000 studies on the adaptability of marine life forms. Starting with simple archaea lacking a nucleus, bacteria and unicellular algae right through to animals and plants, they found the species in each case with the highest temperature tolerance within their group and determined their complexity. In the end, it became apparent that the assumed functional principle seems to apply: the simpler the structure, the more heat-tolerant the species.

But: “The adaptation limit of an organism is not only dependent on its upper temperature threshold, but also on its ability to cope with small amounts of oxygen. While many of the bacteria and archaea can survive at low oxygen concentrations or even without oxygen, most animals and plants require a higher minimum concentration,” explains Dr. Daniela Storch. The majority of the studies examined show that if the oxygen concentration in the water drops below a certain value, the oxygen supply for cells and tissues collapses after a short time.

“We observe in fish in the North Sea that larger individuals of a species are affected first at extreme temperatures. In connection with Earth warming, there is generally a trend that smaller species replace larger species in a region. Today, however, plants and animals in the warmest marine environments already live at their tolerance limit and will probably not be able to adapt. If warming continues, they will migrate to cooler areas and there are no other tolerant animal and plant species that could repopulate the deserted habitats,” says Prof. Dr. Hans-Otto Pörtner of the Alfred Wegener Institute. The biologist initiated the current study and is the coordinating lead author of the chapter “Ocean systems” in the Fifth Assessment Report.

The new meta-study shows that their complex structure sets tighter limits for multicellular organisms, i.e. animals and plants, within which they can adapt to new living conditions. Individual animal species can reduce their body size, reduce their metabolism or generate more haemoglobin in order to survive in warmer, oxygen-deficient water. However, animals and plants are fundamentally not able to survive in conditions exceeding the temperature threshold of 41 degrees Celsius.

On the other hand, simple unicellular organisms like bacteria benefit from warmer sea water. They reproduce and spread. “Communities of species in the ocean change as a result of these new living conditions. In the future animals and plants will have problems to survive in the warmest marine regions and archaea, bacteria as well as unicellular animal organisms will spread in these areas. There are already studies showing that unicellular algae will be replaced by other unicellular organisms in the warmest regions of the ocean,” says Prof. Dr. Hans-Otto Pörtner. The next step for the authors is the question regarding the role the complexity of species plays for tolerance and adaptation to the third climatic factor in the ocean, i.e. acidification, which is caused by rising carbon dioxide emissions and deposition of greenhouse gas in seawater.

Living at the limit

For generations ocean dwellers have adapted to the conditions in their home waters: to the prevailing temperature, the oxygen concentration and the degree of water acidity. They grow best and live longest under these living conditions. However, not all creatures that live together in an ecosystem have the same preferences. The Antarctic eelpout, for instance, lives at its lower temperature limit and has to remain in warmer water layers of the Southern Ocean. If it enters cold water, the temperature quickly becomes too cold for it. The Atlantic cod in the North Sea, by contrast, would enjoy colder water as large specimens do not feel comfortable in temperatures over ten degrees Celsius. At such threshold values scientists refer to a temperature window: every poikilothermic ocean dweller has an upper and lower temperature limit at which it can live and grow. These “windows” vary in scope. Species in temperate zones like the North Sea generally have a broader temperature window. This is due to the extensively pronounced seasons in these regions. That means the animals have to withstand both warm summers and cold winters.

The temperature window of living creatures in the tropics or polar regions, in comparison, is two to four times smaller than that of North Sea dwellers. On the other hand, they have adjusted to extreme living conditions. Antarctic icefish species, for example, can live in water as cold as minus 1.8 degrees Celsius. Their blood contains antifreeze proteins. In addition, they can do without haemoglobin because their metabolism is low and a surplus of oxygen is available. For this reason their blood is thinner and the fish need less energy to pump it through the body – a perfect survival strategy. But: icefish live at the limit. If the temperature rises by a few degrees Celsius, the animals quickly reach their limits.

Follow the Alfred Wegener Institute on https://twitter.com/AWI_Media and http://www.facebook.com/AlfredWegenerInstitute. In this way you will receive all current news as well as information on brief everyday stories about life at the institute.

The Alfred Wegener Institute conducts research in the Arctic, Antarctic and oceans of the high and mid-latitudes. It coordinates polar research in Germany and provides major infrastructure to the international scientific community, such as the research icebreaker Polarstern and stations in the Arctic and Antarctica. The Alfred Wegener Institute is one of the 18 research centres of the Helmholtz Association, the largest scientific organisation in Germany.