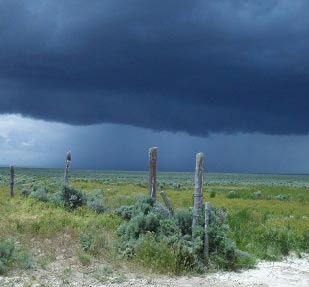 —An early summer storm passes over sagebrush country near Hollister, Idaho. The area has not burned within the 20 year time frame of the study. It features mature sagebrush, but also non-native cheatgrass, mustard, and crested wheatgrass, and barbed-wire fencing, which provides perches for predatory birds. Non-native plants and human infrastructure diminish the quality of the habitat for sage grouse. Credit, Robert Arkle, June 2011.

As fires sweep more frequently across the American Great Basin, the US Bureau of Land Management (BLM) has been tasked with reseeding the burned landscapes to stabilize soils.

BLM’s interventions have not helped to restore habitat for the greater sage grouse (Centrocercus urophasianus) reported scientists from the US Geological Survey (USGS) and US Forest Service in the Ecological Society of America’s journal Ecosphere last week, but outlier project sites with good grouse habitat may yield clues to successful management scenarios.

Their report arrives in the shadow of a pending decision by the US Fish and Wildlife Service (FWS) to protect the sage grouse under the Endangered Species Act, and efforts by BLM and FWS to establish voluntary conservation and restoration management plans in lieu of endangered species listing mandates.

Protection of sage grouse under the Endangered Species Act could affect the management of 250,000 square miles of land in the western US. FWS must decide on the grouse’s protection status by the end of FY 2015.

Wildfire is the predominant cause of habitat loss in the Great Basin. The sagebrush ecosystem is not adapted to frequent fires like some forests in California and the central Rockies, and fires have increased in frequency and in size over the last half century.

“The most common species, big sagebrush, doesn’t re-sprout from the stump. After it burns, it’s dead and it has to reseed, and it’s not very good at dispersing seeds long distance,” said author Robert Arkle, a supervisory ecologist for the USGS Forest & Rangeland Ecosystem Science Center at the Snake River Field Station in Idaho. “Seeds aren’t viable very long. Some years they don’t reproduce at all, without the right spring conditions. Getting sage established out in the middle of these big burned areas is a difficult task.”

“Accomplishing those goals certainly wouldn’t hurt sage grouse, but whether or not these treatments provide a benefit for sage grouse doesn’t have bearing on the success of the ESR program,” said Arkle. “It’s important to recognize the difficulty of what the land management community is trying to do.”

Historically, the Great Basin burned in smaller, patchier conflagrations, at intervals on the order of once per century. Managers are now seeing sagebrush country burn every 20 years in parts of the Great Basin, fueled by drought and vigorous non-natives like cheatgrass (Bromus tectorum).

“Almost a million acres burn each year in the Great Basin and, since 1990, about 6% of the Great Basin has been treated with these ESR projects. Almost all treated acres occur in historic sage grouse habitat,” said Arkle. That’s why the team chose to look at ESR project sites. “We have this problem with non-native plants coming in, changing the fire cycle, and promoting more frequent fires. We wanted to know if ESR treatments had improved conditions for grouse in these vast burned areas.”

The average ESR project encompasses 4 square miles. In 2007, the Murphy Complex Fire burned 653,000 square miles in south-central Idaho. To cover such large areas, BLM spreads seed from aircraft or with tractor and rangeland drill seeders, usually in the fall or early winter. They customize a mix of forb, bunchgrass, and shrub seeds to the site. In recent years, BLM has moved to using native species when possible.

Arkle and colleagues examined 101 sites that burned once between 1990 and 2003. To select their sites, they compiled a database of fires and ESR projects from which they randomly chose a set of project sites with a gradient of precipitation and annual temperatures but similar soil types.

“Treated plots were not much more likely to be used by sage grouse than the burned and untreated, on average, but there were outliers. Those are important, because they are sites where the treatments were more effective, in terms of sage grouse habitat,” said Arkle.

Sage grouse prefer land that has not burned at all in recent decades. Arkle and his colleagues found little sagebrush cover at burned sites, whether treated or not.

“I think that’s the most important finding, because some sites burned 20 years ago and still haven’t recovered,” said Arkle. “We did not see a trend of increasing sagebrush cover with time, so time is not the limiting factor in this 20 year window.” If not time, then what does sagebrush need to recover? The limiting factor could be related to climate, or prevalence of non-native plants. It is a question the researchers hope to address in the future.

Sage grouse are picky birds, Arkle and colleagues found, preferring a sagebrush steppe environment featuring very little human development and dwarf sagebrush (Artemisia arbuscula, A. nova, or A. tripartita) but not cheatgrass or other non-native plants. Even in otherwise primo landscapes, if just 2.5% of the land is developed within five kilometers of a site, the birds will be half as likely to use it. If any development, including paved roads, can be seen, they don’t want be there. Seemingly low impact structures like fences and livestock watering stations provide predatory ravens with high perches from which to spy sage grouse nests.

To Arkle’s mind, the study results argue for maintaining and protecting existing expanses of intact, high quality habitat, and only secondarily trying to fix what’s broken.

Experimental techniques have some promise, and include multiple seedings when the first try fails, out-planting pods of seedlings, and using different types of drill seeding equipment. Reseeding burns with local varietals or close genetic matches could improve recruitment. Controlling non-native plants with herbicides and fungal infections has been tried, with mixed results.

But the factors that ultimately determine the survival of the sagebrush ecosystem may be out of managers’ control. The study, and another tracking the recovery of mountain big sagebrush (A. tridentata subsp. vaseyana) at high elevation, suggest that climate may play a role in the failure of big sage germination and establishment in hotter locations. Managers can try to work with and around climate and weather constraints, but impending climate changes will likely make this task more difficult. Some sites are more resilient than others. It’s possible that parts of the Great Basin will cross a tipping point of climate and species representation, from which they cannot return.

“There is potential for sites to move into a new plant community state,” said Arkle. “It’s possible that some have gone past a threshold. We could have a really difficult time trying to move them back to plant communities that existed historically.”

This open access report was funded by the US Geological Survey, the Bureau of Land Management, and the US Forest Service.