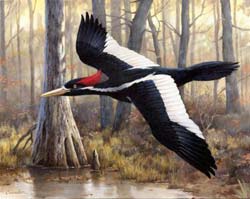 One of America’s most majestic birds, the ivory-billed woodpecker was believed to be extinct, but several sightings have been recently reported, prompting a massive search. Credit: Image courtesy of the Audobon Society

Developed by researchers from the University of California, Berkeley, and Texas A&M University, the high-resolution intelligent robotic video system installed in the Bayou DeView area of the Cache River National Wildlife Refuge in Arkansas is part of a major effort to locate the ivory-billed woodpecker in its historic habitat, the bottomland forests of the southeast United States.

If the researchers obtain conclusive photographic evidence of the woodpecker, it will settle a debate that has become heated in recent years and fascinated millions of people around the world, from bird-watchers and environmentalists to Arkansas farmers and duck hunters.

Ken Goldberg, a UC Berkeley professor of industrial engineering and operations research, and of electrical engineering and computer sciences, will present initial samples from this video system on Saturday, Feb. 17, at a news briefing on the future of robotics at the annual meeting of the American Association for the Advancement of Science (AAAS) in San Francisco.

The robotic video system is part of a new project, called Collaborative Observatories for Natural Environments (CONE) and funded by the National Science Foundation, to develop automated systems that can observe and record detailed natural behavior in remote settings. Goldberg and his former graduate student, Dezhen Song, now an assistant professor of computer science at Texas A&M, are co-principal investigators of the project.

In the early stages of the video system's development, Goldberg worked with Robert Full, professor of integrative biology and director of the Poly-PEDAL (Performance, Energetics, Dynamics, Animal Locomotion) Laboratory at UC Berkeley. “We call it COLABCAM for collaborative lab camera, and it is meant to show experiments in progress on animals to our robot collaborators,” said Full, who will join Goldberg at the AAAS robotics briefing. Full will be presenting his work on bio-inspired robots.

“What Goldberg has now done is take this lab camera into the field,” said Full.

Goldberg and Song recently teamed up with researchers from the Lab of Ornithology at Cornell University to help look for the ivory-billed woodpecker, also reverently referred to as the “Lord God bird” or the “Holy Grail of bird-watching.” The search throughout the Southeast is being led by U.S. Fish & Wildlife and in the Cache River Refuges of Arkansas by the Arkansas Game and Fish Commission.

The bird, standing 18 to 20 inches tall with a wingspan of 30 to 31 inches, was considered the largest woodpecker north of Mexico when it vanished more than six decades ago. It feasts on beetle larvae that inhabit the dead or dying trees of the bottomland wilderness – or what remains of it – in the southeast United States.

It had been feared extinct for decades until sightings in recent years revived hopes of the species' survival. However, most eyewitness observations of the woodpecker were made while the bird was flying through dense forests, making it difficult to obtain photographic evidence of the sightings. Yet, in 2004, biologists made national news headlines when they captured a few seconds of video of what appears to be an ivory-billed woodpecker.

But those sightings also generated their share of controversy, with skeptics claiming that the fuzzy image in the video, taken by David Luneau, associate professor of electronics at the University of Arkansas at Little Rock, actually depicted a common look-alike bird, the pileated woodpecker.

Hopes that the ivory-billed woodpecker survived extinction were renewed last September along the Florida Panhandle when another team of scientists from Auburn and Windsor universities reported sightings and retrieved a number of audio recordings of the bird's distinctive double knock. Still, none of the evidence to date has provided the definitive proof of the bird's existence that skeptics demand.

“A single photographic frame would have to clearly show the unique markings of the ivory-billed woodpecker,” said Goldberg. “Much better would be a high-resolution video clip that would also capture its unique wing and flight patterns.”

The researchers note that simply pointing video cameras at the sky and recording is not practical, as the images would quickly fill up the computer's hard drive. The challenge, they say, is for the software to automatically recognize when animals are present. “Passive infrared (PIR) motion sensors are sometimes used in wildlife research,” said Goldberg, who has pioneered networked teleoperation systems for more than a decade. “The problem is that PIR sensors look for heat and are not triggered by birds flying overhead. So we're developing a robotic system that analyzes high resolution video in real time.”

In February 2006, the Cornell researchers took Goldberg and Song out to the Cache River National Wildlife Refuge to scout out potential locations for placing the remote cameras. Because no one knows exactly where the bird might appear, the cameras must cover a relatively wide swath of sky.

They settled upon a power line that cuts through the bayou and provides a 50-foot-wide clearing unobstructed by trees.

“It's a natural bottleneck in the forest, and birds passing through that corridor are relatively easy to spot because they expose themselves,” said Ron Rohrbaugh, project director at the Cornell Lab of Ornithology. “At this location, we should have the highest probability of capturing an image of the ivory-billed woodpecker.”

With the generous help of the Arkansas Electric Cooperative, a 69 kilovolt transformer was erected for the project that provides both a power source and a post to mount the equipment. The researchers decided against solar and battery cells because they would not provide a reliable enough power source.

The two cameras – one pointing east and the other west – are connected to a computer that processes the data. Waterproof gear helps protect the equipment from the elements, including rain and wind, and even from occasional bird droppings.

The researchers created software that keeps video files only when potential “bird flight” movement is sensed.

The software is based on new algorithms that can handle the unpredictable conditions of a natural environment, filtering out false readings from clouds, water reflections and falling leaves. “The program knows, for instance, that the ivory-billed woodpecker flies 20 to 40 miles per hour, so anything outside that range is deleted,” said Song, who worked with Ni Qin, a computer science Ph.D. student at Texas A&M, on the software.

“The high-resolution camera we have shoots at 22 frames per second, with approximately 2 to 3 megapixels per frame,” said Song. “That's a huge amount of data that must be managed.”

Collecting the video data involves a decidedly low-tech approach: Luneau takes a boat out to the site every two weeks to change the disk.

Not only is Luneau skilled with computer equipment, he is an avid bird-watcher and a leading member of the ivory-billed woodpecker search team in Arkansas. He does an initial screening of the images from the hard drive, and then sends the data to researchers at Cornell, Texas A&M and UC Berkeley.

And what if a high-quality image of the ivory-billed woodpecker is captured? “If something really interesting is in the frame, Cornell makes the call (on the identity of the bird),” said Song.

Rohrbaugh pointed out the benefits of using an autonomous camera. “There are other ways of searching for the ivory-billed woodpecker, but those ways usually involve a human positioned in the forest for a very long time,” he said. “Humans are expensive, and they're not always alert, and their simple presence is a disturbance to the environment, even when they're camouflaged and sitting quietly. Remote systems that can serve as our eyes and ears are a big advantage.”

Song also noted that using the camera extends the search season to the entire year.

“Usually people do this type of bird-watching in the winter because there are fewer leaves, making it easier to spot the woodpecker,” Song said. “Also, in the summer, the temperature is hot, it's swampy, and there are mosquitoes and snakes to deal with. Our system can run the whole year, and it is not bothered by mosquitoes.”

The researchers are continuing to fine tune the system and algorithms while combing carefully through each new set of video that is collected.

“I'm a person who's been in the outdoors all my life, and I'm trained as a wildlife biologist,” said Rohrbaugh. “Certainly going into this I had a lot of skepticism about the usefulness of this robotic camera. But now there's hope that by using this camera, we can get a hi-res image that is an indisputable piece of evidence that the ivory-billed woodpecker is living in Arkansas.”

However, the researchers also acknowledge the possibility that the robotic cameras may never capture definitive footage of the famed woodpecker.

“I'm hopeful, but not overconfident,” Goldberg said. “We're willing to run this camera for years, and we're prepared to accept it if we never see the bird. But if this persistent robot out on the bayou manages to capture verifiable high-resolution images of the legendary ivory-bill, it would be a major discovery for scientists, for conservationists and for more than 45 million American bird-watchers.”