Home / Ecology, The Environment and Conservation / Cleaner Fuel by Nanoparticles
06.02.2007 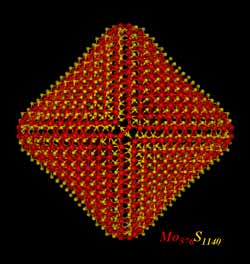 It is well known that material properties change when reducing particle sizes. However, for MoS2 nanoparticles the size-dependent deviations from the bulk properties are more pronounced than in other materials. Researchers at the Technical University Dresden and the Forschungszentrum Dresden-Rossendorf have studied in detail the influence of the particle size on the physical and chemical properties of MoS2.

It was shown for the first time that not only the size, but also the shape of the particle matters for the catalytic potential in fuel desulphurisation. The results have been recently reported in Angewandte Chemie (46/2007) and Nature Nanotechnology (2/2007).

Very small, sulphur-rich MoS2 nanoplatelets are well known as active catalysts for the desulphurisation of fuels. It has recently been shown that the catalytic potential increases dramatically with decreasing particle size. This effect has been correlated with the specific structure along the edges of triangular nanoplatelets. In contrast to the semi-conducting bulk the edges of the MoS2 nanoplatelets are electronically conducting and this is where sulphur-containing impurities in the fuel are decomposed.

An international team of researchers from the Technical University Dresden, the Forschungszentrum Dresden-Rossendorf, both in Germany, and at the Weizmann Institute in Rehovot, Israel, have examined the properties of larger particles with many long and well accessible edges. It was found that larger, regular three-dimensional particles promise a desulphurisation potential that is similar to the nanoplatelets. Such particles have an octahedral form that is similar to a bipyramid and require less effort in their production than the nanoplatelets that are ideally synthesised directly on a gold support and cover it like a nanoconfetti.

For the first time, the research team has shown that the potential for the desulphurisation of fuels is not limited to the smallest MoS2 particles, as the electronically conducting catalytic reaction sites also occur in larger particles. Thus, the particle size and the three-dimensional structure crucially determine the physical and chemical properties of MoS2 nanoparticles.

A joint theoretical and experimental investigation correlated the particle size and shape to the structural and electronic properties that are responsible for the catalytic activity of MoS2 nanoparticles. Platelets, fullerenes or even nanotubes, MoS2 nanoparticles larger than 10 nanometres are semi-conducting like the bulk. In contrast, within a diameter range of 3 to 7 nanometres regular, three-dimensional structures occur that are composed of eight equilateral triangles. Such particles have successfully been synthesised and observed experimentally by transmission electron microscopy. For the edges and corners of such nano-octahedra the quantum-mechanical calculations of the researchers from Dresden predict similar metallic properties to those found in the catalytically active nanoplatelets. According to the model calculations, single-walled nano-octahedra with a few hundred atoms are not stable. However, the observed multi-walled particles of nested octahedra are predicted to be more stable species which promise similar catalytic potential as the smaller nanoplatelets (Angew. Chem., Int. Ed. 46 (2007), 623).