Predicting where flooding will occur in the West 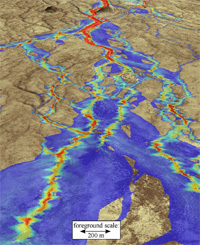 Computer-generated model of how 1997 Tropical storm Nora affected Tiger Wash in Arizona’s Harquahala Mountains. The red color shows where the water was deepest, and the brown indicates upland areas which did not flood. Photo credit: Jon Pelletier, UA.

For many areas of the West, the Federal Emergency Management Agency’s Flood Insurance Rate Maps (FIRMS) overestimate the amount of land area within the 100-year floodplain. New research suggests a way to improve the maps.


The new three-pronged approach combines a new numerical computer model with two additional methods, satellite-image analysis and field observations. Each method serves as a check on the other two. The research team focused on the floodplains for a 10-year flood, a 100-year flood and a maximum flood for two sites in Arizona.

In addition to providing better hazard information to the public, revising the floodplains maps could have major economic impact in the rapidly growing Southwest. Often, homeowners in areas deemed to be in a floodplain must buy flood insurance in addition to regular homeowner’s insurance.

“I think the important thing is that we have three methods that give darn near the same result, and it’s a way smaller floodplain than the FAN model FEMA has generally used,” said research team leader Jon D. Pelletier, an associate professor of geosciences at The University of Arizona in Tucson. “These three independent methods converge on the same answer. … That was really surprising to us.”

The combined method applies to the foothills of western mountain ranges such as the Santa Catalinas and the Tortolitas outside Tucson. Many western cities, including Phoenix, Las Vegas and Denver, have similar foothills.

“You have a lot of small channels draining the mountains, and the floodplains are very complex,” said Pelletier. “Back in the day when data that mapped these small channels weren’t available, FEMA called it all floodplain. That’s fine in the Lower Mississippi Valley, but it’s not appropriate out here. These three methods give us a new level of detail. We’re looking at a scale of five to 10 meters and can see that the area of the landscape that’s prone to flooding is often really small. I predict our result would apply to many other foothills regions in Arizona.”

Pelletier, Larry Mayer, a UA adjunct professor of geosciences, and Philip A. Pearthree, a research geologist with the Arizona Geological Survey in Tucson, and their colleagues have published their findings in the current issue of GSA Bulletin, a publication of the Geological Society of America. A complete list of authors and the reference for the paper can be found at the end of this release. The research was supported by the National Science Foundation, the Pima County Flood Control District, the Arizona Geological Survey and the Flood Control District of Maricopa County.

In the region of the West characterized by towering mountains interspersed with broad, flat valley floors, the land sloping away from the mouth of a mountain canyon, known as the alluvial fan, is criss-crossed by a myriad of small, shallow channels that drain into the valley below. Such topography is found in Arizona, Utah, western Colorado, western New Mexico and parts of eastern and southern California.

Even in a major flood, some upland areas between channels remain dry. However, traditional techniques for assessing the potential extent of floods on alluvial fans often designate those upland areas as flood-prone, thereby overestimating the amount of land in danger of flooding.

Pelletier was embarrassed when he had to tell students that such assessments were state-of-the-art. So he and his colleagues decided to devise a better way.

To create a computer model to predict flood intensity, Pelletier used very detailed maps of alluvial fans, data from stream gauges and a mathematical analysis that predicted how the water flowed through the numerous small channels on a given alluvial fan during a given storm.

For maps, Pelletier used digital elevation models (DEMs), which are computer-generated maps made from low-altitude aerial photographs that can show changes in elevation of only 4 inches (10 cm). Such maps are available for Wild Burro Canyon in the Tortolita Mountains outside of Tucson, Ariz. and Tiger Wash in the Harquahala Mountains west of Phoenix. Because of the complex topography of those two sites, land that hasn’t flooded in thousands of years can be separated from the active floodplain by an elevation difference of only one to two feet. Both areas also have stream gauges or field observations that record the volume of water during past floods.

Pelletier plugged the data for two historic floods — the September 1997 flood in Tiger Wash from tropical storm Nora and the July 1988 flood in Wild Burro Canyon from monsoon rains — into his mathematical model. The computer then created maps that predicted where the waters from those floods went.

Pearthree and Mayer had already done detailed studies of how floods affected those sites. Mayer had developed a method that uses LANDSAT satellite images to document changes that occurred on the landscape during floods. Pearthree had used traditional field-based method shortly after the flooding to see where inundation had occurred.

Pelletier then compared the computer-generated maps to two retrospective methods of assessing floods on alluvial fans. The computer model slightly underestimated the observed extent of the floods, matching the other methods for about 85 percent of the time. He’s now improving the model to increase its accuracy.

“Numerical models like mine are much faster than the other two methods,” Pelletier said. “But it’s important to have independent verification and the other two techniques provide that.”

Geologic field-mapping, while very accurate, requires that highly trained personnel spend many man-hours mapping the soils and other landscape features. Tiger Wash and Wild Burro Canyon have had such intensive study, but few other areas have. In contrast, the satellite-based method can be used for extensive regions of the West but can only provide information about what has occurred within the last 20 years. So if a particular canyon had only moderate floods during that time, the satellite-based method cannot indicate what areas will be inundated during a 100-year flood.

Pelletier’s computer method uses data that are becoming more readily available for more areas. He can then specify the size of flood — 10-year, 100-year or maximum level — for a specific canyon, and the computer predicts where and how high the floodwaters will go. His model provides a probability of whether a particular piece of land will be flooded by a specific size of flood.

He wants to further test the three-pronged approach in other areas, including Clark County, Nev., one of the fastest-growing counties in the country, where Las Vegas is located.

The scientists’ coauthors include P. Kyle House of the Nevada Bureau of Mines and Geology at the University of Nevada, Reno; Karen A. Dempsey of Portland, Ore.; Jeanne E. Klawon of the U.S. Bureau of Reclamation in Denver; and Kirk R. Vincent of the U.S. Geological Survey in Boulder, Colo. Their paper, “An integrated approach to flood hazard assessment on alluvial fans using numerical modeling, field mapping, and remote sensing,” is in the September/October issue of the GSA Bulletin.