Home / Ecology, The Environment and Conservation / How Much Excess Fresh Water Was Added to the North Atlantic in Recent Decades?
17.06.2005

How Much Excess Fresh Water Was Added to the North Atlantic in Recent Decades? 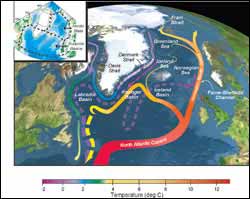 Topographic map of the Nordic Seas and Subpolar Basins, with schematic circulation of surface currents (solid curves) and deep currents (dashed curves) that form a portion of the Atlantic Meridional Overturning Circulation (MOC). The color of the curves depicts their approximate temperatures. Map inset shows the boundaries of the Nordic Seas and Subpolar Basins used in the analysis of water volume. (Illustration by Jack Cook, Woods Hole Oceanographic Institution)

Large regions of the North Atlantic Ocean have been growing fresher since the late 1960s as melting glaciers and increased precipitation, both associated with greenhouse warming, have enhanced continental runoff into the Arctic and sub-Arctic seas. Over the same time period, salinity records show that large pulses of extra sea ice and fresh water from the Arctic have flowed into the North Atlantic. But, until now, the actual amounts and rates of fresh water accumulation have not been explicitly known.

In a paper to be published June 17 in Science, Ruth Curry of the Woods Hole Oceanographic Institution (WHOI) and Cecilie Mauritzen of the Norwegian Meteorological Institute quantified for the first time how much additional fresh water caused the observed salinity changes in the northern North Atlantic Ocean, how fast it entered the Atlantic circulation, and where that fresh water was stored. They report that patterns of fresh water accumulation over the past four decades suggest that a freshening threshold important to the ocean circulation and its poleward transport of heat could be reached in a century, although future impacts of global warming and glacial melting make prediction imprecise at this time.

Curry, a research specialist in the WHOI Physical Oceanography Department, and Mauritzen, an oceanographer at the Norwegian Meteorological Institute, analysed data collected in the North Atlantic Ocean between Labrador, Greenland and northern Europe over the last 55 years to reconstruct the history of ocean properties such as temperature, salinity and density. For successive 5-year time periods, they estimated how much fresh water had to have been added or removed to account for the top-to-bottom salinity changes observed from 1953 to 2002. They mapped the distribution of fresh water storage layer-by-layer to determine where the excess was accumulating and how it was affecting ocean density. They then used the observed rates and distribution of freshening to estimate how long it would take to reach thresholds that would affect the portion of ocean circulation driven by density.

In an average year, about 5000 cubic kilometers (km) of fresh water flows from the Arctic into the North Atlantic through passages located east and west of Greenland. The researchers estimate that in addition to this amount, an extra 19,000 cubic km flowed into and diluted the northern seas over the 30-year time period between 1965 and 1995. Fully half of the excess fresh water (~10,000 cubic km) entered the system in the late 1960s boosting the flow rate from 5000 to ~7000 cubic km per year-a 40% increase in fresh water inflow. For comparison, the outflow from the Mississippi River each year is about 500 cubic km, while Earth’s largest river, the Amazon, discharges 5000-6000 cubic km annually.

Curry says the records for the 1950s and 1960s showed salinities initially increasing in the Atlantic’s Subpolar Basins, while changes in the Nordic Seas were relatively small. Between 1970 and 1995, however, both areas became greatly freshened. The team says the most striking event in their study occurred in the early 1970s and is known as the “Great Salinity Anomaly”. During the late 1960s, a large pulse of fresh water entered the Nordic Seas through Fram Strait and moved quickly southward in the East Greenland Current. Curry says the event is well-named since it contributed about 10,000 cubic km of extra fresh water to the northern ocean basins. (Previously, the Great Salinity Anomaly was believed to have involved less than one quarter of that amount.) This fresh water was eventually mixed downward in the Labrador and Irminger Basins and then moved horizontally at mid-depths around the North Atlantic.

Pulses of excess fresh water and ice appear to have come from the Arctic in the 1980s and 1990s as well. Of the estimated 19,000 cubic km added to the northern North Atlantic between 1965 and 1995, about 80% ended up in the Subpolar Basins, which are about twice the geographic size of the Nordic Seas. The amount of fresh water involved would be equivalent to a layer about 3 meters (roughly 9 feet) thick spread evenly over the total area of the Subpolar Basins, and a layer about 1.8 meters (about 5 feet) thick over the Nordic Seas.

The Nordic Seas (located between Iceland, Greenland and Norway) and the Labrador and Irminger Basins (east and west of southern Greenland) are places where cold dense waters are formed, a critical component of the meridional overturning circulation (MOC) and part of a great “ocean conveyor belt” that carries warm surface waters from the tropics northward. At high latitudes, the heat-bearing surface waters cool (the heat is released to the overlying atmosphere) and these denser waters sink and flow southward in the deep ocean-a process which helps keep the conveyor moving. The transport of heat northward contributes to the moderate wintertime climate at high latitudes, notably in regions near England and Scandinavia.

Excessive amounts of freshwater could alter the ocean density that drives a portion of this circulation system, diminish the amount of heat that is transported northward, and significantly cool areas of the Northern Hemisphere. Curry and Mauritzen report that the changes in salinity observed to date do not appear to have changed, as yet, the ocean circulation and heat transport, but expect continued freshening to affect the ocean conveyor in the next two centuries.

“Precipitation and river runoff at high latitudes have been increasing,” Curry said. “In the last decade, fresh water has been accumulating in the Nordic Seas layer (the upper 1000 meters) that is critical to the ocean conveyor, so it is something to watch. The Greenland ice sheet represents a wild card,” she added. “There is an enormous amount of freshwater tied up there, which, as it melts, will affect the headwaters of the ocean conveyor. ”

About one third of the total Atlantic MOC crosses the Greenland-Scotland Ridge, which separates the Nordic Seas from the North Atlantic. The exchange of waters north and south of the ridge is controlled by a contrast of ocean density there at depths between 200 and 800 meters-the Nordic Seas being denser than the Subpolar Basins. Adding fresh water to the ocean reduces density, removing fresh water (or increasing its salinity) increases density. So as fresh water accumulates in the Nordic Seas, its density will decrease, the north-south density contrast will diminish, and the southward flows over the ridge will weaken.

These cold, dense southward flowing waters (collectively called Nordic Seas Overflow Waters) have been closely monitored with instrument arrays for more than a decade, but no sustained changes have yet been measured. Of the total 19,000 cubic km of extra fresh water that has diluted the northern Atlantic since the 1960s, only a small portion-about 4000 cubic km-remained in the Nordic Seas; and of that amount only 2500 cubic km accumulated in the critical layer feeding the Overflow waters. This is the reason, Curry explains, that the overflows have not yet slowed despite all the freshening. At the rate observed over the past 30 years, it would take about a century to accumulate enough freshwater (roughly 9000 cubic km according to this study) in the critical Nordic Seas layer, to significantly slow the ocean exchanges across the Greenland-Scotland Ridge; and nearly two centuries of continued dilution to stop them. The researchers conclude therefore that abrupt changes in ocean circulation do not appear imminent.

Curry points out that uncertainties remain in assessing the possibility of circulation disruptions, including future rates of greenhouse warming and glacial melting. Most computer simulations of greenhouse warming show increased precipitation and river runoff at high latitudes that leads to a slowing of the Atlantic conveyor. Only one available model study, however, contains an interactive Greenland Ice Sheet. Pooling and release of glacial meltwater, collapse of an ice shelf followed by a surge in glacier movement, or lubrication of the glacier’s base by increased melting are all mechanisms that could inject large amounts of freshwater into the critical upper layers of the Nordic Seas.

“It certainly makes sense to continue monitoring ocean, ice, and atmospheric changes closely,” Curry said. “Given the projected 21st century rise in greenhouse gas concentrations and increased fresh water input to the high latitude ocean, we cannot rule out a significant slowing of the Atlantic conveyor in the next 100 years. I emphasize that we are talking about century timescales to witness measurable changes in the ocean transports of mass and heat across the Greenland-Scotland Ridge-we are not suggesting that the Gulf Stream will shut down.”

The study was funded by theNational Science Foundation, a WHOI Independent Study Award, and by the Norwegian Research Council.