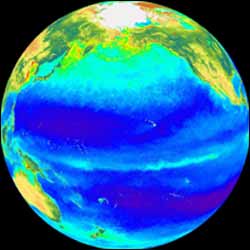 In this map of the Pacific Ocean, the deep blue areas are the nutrient-poor and thus low-fertility, central gyres of the major ocean basins. Fewer phytoplankton grow here. The lighter blue areas represent more productive regions with higher rates of nutrient input and consequently higher phytoplankton biomass. The continental shelves and upwelling regions (e.g., along the equator) tend to have higher biomass because of nutrient input. Map Courtesy of the National Oceanic and Atmospheric Administration

Large, nutrient-poor expanses of the open ocean are getting a substantial nitrogen influx from an abundant group of unicellular organisms that “fix,” or chemically alter, nitrogen into a form usable for biological productivity.

First identified about five years ago, these organisms – about 7 microns in diameter – are fixing nitrogen at rates up to three times higher than previously reported for the Pacific Ocean, according to research published in the Aug. 26, 2004 edition of the journal Nature. On a transect from Oahu, Hawaii, to San Diego, Calif., researchers measured some of the highest rates in this study: Seven milligrams of nitrogen – an essential nutrient for the growth of many organisms – were being injected into the phytoplankton and other organic materials in every square meter of the ocean surface.

“To our surprise, these unicellular nitrogen-fixers are broadly distributed spatially and vertically distributed at least down to 100 meters, and they’re fixing nitrogen at quite high rates,” said lead author Joe Montoya, an associate professor of biology at the Georgia Institute of Technology. “The rates we measured imply a total input of nitrogen that exceeds the rate of nitrogen fixation measured for the cyanobacteria Trichodesmium (traditionally believed to be the dominant marine nitrogen-fixer) in the Pacific Ocean. These unicells are the largest single source of nitrogen entering the water in broad areas of the ocean.”

This level of nitrogen fixation in the Pacific Ocean alone accounts for about 10 percent of the total global oceanic new production of biomass, according to the researchers’ preliminary calculations published in the Nature paper. “This is globally important because new production in the ocean is one of the key forces that drives the uptake of carbon dioxide from the atmosphere into the ocean,” Montoya explained. “This represents a route for trapping and sequestering carbon dioxide and keeping it out of atmospheric circulation for some time.”

Carbon dioxide is one of the naturally occurring gases that traps energy from the sun and helps maintain hospitable temperatures on Earth, creating the “greenhouse effect.” But studies indicate that greenhouse gases that form from vehicle and industrial emissions are enhancing the greenhouse effect and contributing to global climate warming.

The nitrogen-fixation rates reported in Montoya’s study are conservative figures, according to the paper. First, any errors in the researchers’ experiment will tend to produce underestimates of the true rate, Montoya said. Second, they interpreted the data based on the assumption that unicells are only fixing nitrogen for 12 hours a day – a common pattern for other nitrogen-fixing organisms. But some of their data indicate that unicells may actually fix nitrogen around the clock.

“These measurements have important geochemical implications, so at this early stage, I would rather undersell than oversell the numbers,” Montoya added. “…. We may be underestimating the true rate of nitrogen fixation by a factor of two.”

The research team’s findings – resulting from several month-long research cruises — have prompted a follow-up study recently funded by NSF. The scientists will continue to survey the Pacific Ocean, as well as the North Atlantic and the South Pacific oceans in two more research cruises in 2006 and 2007. In addition to collecting more detailed nitrogen-fixation rate measurements, the researchers will conduct manipulation experiments to determine if phosphorus, iron or some other environmental factor is playing a role in determining the abundance, distribution and activity of these unicells, Montoya explained.

There are still numerous regions of nutrient-poor oceans – typically off the continental shelves from the equator north and south to about 40 degrees latitude – about which little or nothing is known in regard to unicellular nitrogen-fixing organisms, Montoya noted. “We are still at a very early stage in understanding ocean science and how things work in these enormous pieces of the ocean,” he added.

But the researchers anticipate finding that unicells have an even greater impact than they have already discovered. “We haven’t even done the measurements yet for the Atlantic and South Pacific oceans, so in aggregate, unicells might account for an even more substantial fraction of the global new production,” Montoya said.

Improving the monitoring of ship emissions