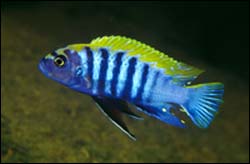 Human activity may be inducing Cynotilapia afra to evolve at an explosive rate.

It’s no secret that life in the 21st century moves at a rapid pace. Human inventions such as the Internet, mobile phones and fiber optic cable have increased the speed of communication, making it possible for someone to be virtually in two places at once. But can humans speed up the rate of one of nature’s most basic and slowest processes, evolution? A study by J. Todd Streelman, new assistant professor of biology at the Georgia Institute of Technology suggests that humans may have sped up the evolutionary clock for one species of fish.

Cichlid fish are well known to biologists for their rapid rate of evolution. While it takes many animals thousands of years to form new species, the cichlids of Africa’s Lake Malawi are estimated to have formed 1,000 new species in only 500,000 years, lightning speed in evolutionary terms. In the 1960s a fish exporter may have unwittingly set the stage for an evolutionary explosion when he introduced individuals of the species Cynotilapia afra to Mitande Point on the lake’s Thumbi West Island. As of 1983, the species hadn’t budged from Mitande Point. But when Streelman, then at the University of New Hampshire, Durham, and colleagues went to the island in 2001, they found the fish had evolved into two genetically distinct varieties in less than 20 years. The study appears in the August 13 edition of Molecular Ecology.

“This is a great example of human-induced evolution in action,” said Streelman. “It adds to a growing list of cases, including introduced salmon, flies and plants, where human disturbance has set the stage for contemporary evolution on scales we’ve not witnessed before.”

The fish have evolved into two genetically distinct and differently colored populations, one on the north side of the island, the other on the south, said Streelman. Cichlid color patterns are important in mate selection, so these distinct markings may promote the evolution of new species.

Whether or not that happens and how long it will take is a question to which Streelman is eager to find the answer. “It could be that we’ll have new species in another 20 years, although this depends on a number of factors. Either way, we have a wonderful opportunity to follow the evolutionary trajectory of these populations over time. We plan to return to the island next July to do further study,” he said. “Thumbi West will be a valuable place to work for years to come.”