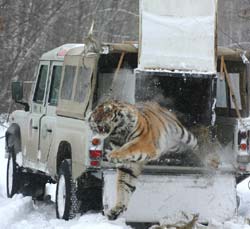 Scientists from the Bronx Zoo-based Wildlife Conservation Society and other groups working in the Russian Far East released a Siberian tiger last week, after rescuing it from a snare set out by poachers.

The eight-to-10-year-old male tiger, estimated to weigh almost 400 pounds, was discovered by two Russian students hiking in the woods after they heard it roaring in distress. After they found the snare wrapped around the tiger’s body, they quickly notified forest guards staying in a cabin a few miles away.

A team of experts from WCS, Inspection Tiger from Russia’s Ministry of Natural Resources, and the Tiger Response Team, arrived on the scene and anesthetized the tiger so it could be removed from the snare.

The tiger had numerous abrasions from the snare, but overall appeared healthy. As a precaution, the team moved the animal to a holding area where it could be observed to make sure it had no internal injuries. Officials believe poachers set the snare specifically to catch tigers, which would have been killed and sold for its skin and body parts. Of the estimated 400 remaining Siberian tigers living in the wild, most are killed by people, according to WCS.

After the tiger was given a clean bill of health, it was fitted with a radio collar, where it will be tracked by WCS scientists as part of a long-term study to better understand and ultimately protect these magnificent big cats.

“The release went well,” said WCS scientist John Goodrich, who participated in the animal’s rescue and release. “The tiger leapt from his cage about a minute after the door was opened. He then bounded about 20 meters into the forest, stopped, turned, and growled, before walking calmly away.”

WCS’s conservation efforts to save tigers in the Russian Far East and throughout their range are featured in “Tiger Mountain,” a new exhibit that opened at the Bronx Zoo last May.