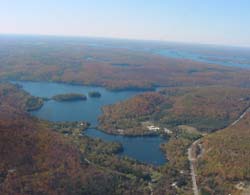 Ninety per cent of the lakes surveyed in a new study of Ontario’s “cottage country” north of Toronto have seen a significant rise in taste and odour-causing algae – most dramatically in the past 20 years, the researchers report.

One of the most frequent complaints voiced by cottagers to local officials is that water in their lakes periodically tastes or smells bad.

A common cause of such problems is blooms of small algae (microscopic plants) that thrive in some of these lakes. Although the frequency of taste and odour complaints seems to be growing steadily, it is unclear whether the problems themselves are increasing or if local users are more sensitized to these issues.

A study published in the current edition of the scientific journal Freshwater Biology examines sediment from 50 lake bottoms in the Muskoka-Haliburton region of Ontario. The results show taste and odour-causing algae have increased in 90 per cent of these lakes since the early 1800s, with a marked rise over the past two decades.

“The timing indicates that these patterns are the result of one or more human-caused stresses operating at a broad, regional scale,” says lead investigator Andrew Paterson, a former doctoral student at Queen’s. “We present new evidence suggesting that disturbances such as acid rain and climatic warming may produce significant, unprecedented changes to the algae of inland lakes, with important implications for water quality.”

Lake water that smells and tastes foul can be traced to a variety of sources, including chemical pollution and dead fish, but the most common cause is a group of algae called chrysophytes. These microscopic organisms produce scales and spines made of glass that are well preserved in lake sediment.

Through an analysis of sediment cores, the researchers were able to reconstruct the history of these lakes, and compare the distribution of chrysophyte algae over different time periods. Their study shows that substantial increase began in the 1930s-1950s, with the sharpest rise over the past two decades.

“This is a classic example where environmental issues have been debated, and decisions made, based on very short-term data sets – typically two to three years,” says Dr. Smol. “Yet most of the answers lie much further back in time. These sediment records are extremely valuable, because no one was measuring algae 80 or 100 years ago.”