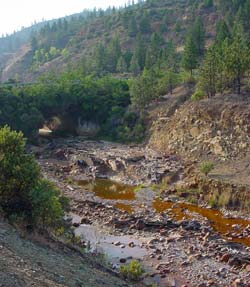 Acidic drainage from a mine flows on the surface after passing through the underground study site at Iron Mountain, near Redding, Calif. <br>Credit: Gene Tyson, UC Berkeley

Research from Iron Mountain mine sheds light on acid drainage

Examining life extracted from toxic runoff at a northern California mine, researchers for the first time have reconstructed multiple individual genomes from a microbial community taken from an environmental sample rather than from a laboratory culture.

According to Jill Banfield, the leader of the scientific team behind the discovery, “This takes the study of natural biogeochemical systems to a new level.”

Announced Feb. 1 in the online version of the journal Nature, the research focused on a sample from a postagestamp- sized patch of pink biofilm taken from a thin microbial layer found growing hundreds of feet underground. (Often slimy, biofilms are communities of microorganisms-such as bacteria and fungi-that grow on surfaces. Think of a kitchen sink left unwiped.) The research team found its biofilm atop a hot, flowing, extremely acidic solution-laden with dissolved iron, copper, zinc and arsenic-emanating from a mine on Iron Mountain, about nine miles northwest of Redding.

According to the Environmental Protection Agency, the mine, which shut down in 1963 after nearly a century of operations, created the most acidic mine drainage in the world, discharging-on average-a ton of toxic metals every day into the Upper Sacramento River until remediation efforts began a decade ago.

Acid mine drainage remains a significant environmental problem worldwide. Banfield, a professor at the University of California at Berkeley, said the new findings enhance scientists’ understanding of the metabolic activity of iron oxidizing microbes that greatly accelerates acid production.

According to Matt Kane, program director in NSF’s Division of Molecular and Cellular Biosciences, the findings shed light on how bacteria and other microbes function collectively.

“This work simultaneously reconstructed the genome sequences for a five-membered microbial community from nature,” Kane said. “It goes beyond previous achievements, such as those that sequenced the entire genome of single, isolated species or efforts that gathered genomic content from a microbial community but stopped short of constructing the individual genomes within it.”

The researchers first screened several biofilms with a technique called FISH-fluorescence in situ hybridization-before settling on the particular pink sample a soup of several strains typical of acid mine drainages. They then applied to their selected community a genomics approach usually put to an individual species-“random shotgun sequencing.”

This meant extracting DNA directly from the sample and a “small insert library.” Once the sequences of short pieces of DNA were obtained, computer processing linked them to generate large genomic fragments that could be assigned to specific organisms within the community.

The researchers reconstructed nearly complete genomes of two organisms-strains of the bacterium Leptospirillum and of the archaeon Ferroplasma-and partial genomes of three other microbes. According to the researchers’ Nature article, such recovery “from an environmental sample is an advance in the study of natural microbial communities.”

According to Banfield, “The transition to this genome-level study of real populations opens the way for new understanding of speciation and evolution.”

Further analysis of each organism’s gene complement yielded clues about which microbes are most likely responsible for which services in this acid-adapted, self-sustaining community.

For example, organic compounds produced by the community allow it to attach to its surroundings; float at the air water interface; and make readily accessible the oxygen, carbon dioxide, nitrogen and iron necessary for respiration and metabolism.

While researchers are unsure which organisms are responsible for creating some key polymers, they found within the Leptospirillum strain-but not in the Ferroplasma strain-the genes for making cellulose and other proteins that prevent drying out and support floatation. The genetic foundation of other critical functions, such as making carbon and nitrogen accessible to the organisms, also appears to be “partitioned among members of the community,” Banfield said.