Home / Ecology, The Environment and Conservation / Rare ant may help solve some mysteries of social evolution
29.01.2004

Rare ant may help solve some mysteries of social evolution 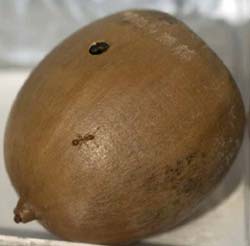 Last fall, ecologists at Ohio State University cracked open an acorn they had found in an Ohio park and discovered a colony of extremely rare ants.

They had uncovered Leptothorax minutissimus, an ant species that has been found in only four other areas of the eastern United States. The researchers found the acorn at a Columbus metro park – the first time the ant has been found in Ohio.

“What makes this find special is the lifestyle of these ants,” said Joan Herbers, an ant expert and a professor of evolution, ecology and organismal biology at Ohio State.

L. minutissimus is a unique social parasite in that it lives entirely within the colonies of other ant species. But unlike parasitic slave-maker ants, which raid and virtually destroy the colonies of unsuspecting hosts, L. minutissimus appears to move in and live amiably with its host. Such organisms are called inquilines.

This relationship intrigues Herbers, who is planning a new study to learn more about these unique ants.

The first and only written description of L. minutissimus is from 1942, when researchers found a colony in Washington, D.C. Since then, colonies have been found at sites in West Virginia, Indiana and on Long Island. And these colonies of anywhere from 50 to 100 ants thrive in the tiniest places – old acorns, hickory nuts, hollow twigs and grasses.

“They’re like gold when you find them,” said Herbers, who is also dean of Ohio State’s College of Biological Sciences.

These tiny ants that grow to around 3 millimeters long – about the length of the writing tip of a ball point pen – are a rich golden color. But it’s how they interact with their hosts that make them a real scientific find. Studying these behaviors closely may give researchers insight into some of the riddles of social evolution.

While L. minutissimus is a parasite, it doesn’t appear to stage the bloodthirsty coups common to its slave-maker ant relatives. Rather, it behaves much like the unwelcome in-laws who come to visit for an undetermined length of time. Numerous L. minutissimus queens move into a new colony and attach themselves to host queens.

But researchers aren’t sure how L. minutissimus moves from colony to colony, as it apparently lacks the worker ants that, in other species, are responsible for scouting out new dwellings.

“L. minutissimus is highly specialized because it’s lost its worker caste through evolution,” Herbers said. Researchers believe this to be true because no L. minutissimus slave-making worker ants have ever been found.

In slave-making ant species, specialized workers raid colonies to secure the labor force needed to forage for food, care for the queen and so on. Slave-makers therefore rely on overt aggression to make a living, but L. minutissimus is apparently accepted into host colonies without any violence.

“Perhaps these queens go out and mate and find colonies that way,” Herbers said. “But we just don’t know.”

During mating season, ant queens grow wings in order to fly around and find males. The wings either fall off or are bitten off by the queen once mating is over.

“We think that the L. minutissimus ants are even more highly evolved than slave-making ants simply because these queens seem to get by quite well on their own,” Herbers said. “The fundamental question we hope to answer is what happens in an evolutionary sense as the interactions between parasites and hosts proceed over time.”

This summer, Herbers and her colleagues will conduct laboratory experiments comparing the behavior of L. minutissimus to two species of slave-making ants. Each parasite will have a chance to move into a colony of a fairly common host species, Leptothorax curvispinosus.

“We’re going to look at the impact each parasite has on the host,” Herbers said, adding that each species will be housed in separate plastic boxes. A filter paper bridge will connect boxes of parasitic ants to boxes of host ants.

The researchers will also put the parasitic species in groups of two and three and let them loose on the host. The idea is to see how and if the parasites interact with each other, and who dominates in those interactions.

“Slave-maker behavior ranges from the all-out ruthless and bloody annihilation of another ant colony to slave-maker ants that have a more harmonious relationship with their host,” Herbers said. “We want to know what separates the behavior of one species from another, what makes one more ruthless than another, and to see if we can get more insight into the key evolutionary differences between these parasitic ants.”