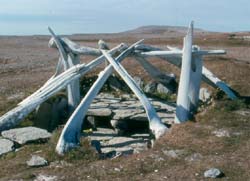 New findings from Canadian scientists dispel the belief that European settlers were the first humans to cause major changes to Canadian and U.S. freshwater ecosystems.

A University of Toronto-led, multidisciplinary team including researchers from Queen’s, McGill, and University of Ottawa show for the first time that prehistoric Inuit whalers dramatically altered high Arctic pond ecosystems through their hunting practices eight centuries ago – a legacy that is still evident today.

The principal investigator on the team, U of T Geology Professor Marianne Douglas, is currently in Antarctica using the same kind of detection techniques to study climate change there.

“Our findings are an example of a long-term human intervention in a place where you really don’t expect it,” says Queen’s Biology Professor John Smol, Canada Research Chair in Environmental Change and co-head of the university’s Paleoecological Environmental Assessment and Research Laboratory (PEARL). “It seems totally ironic since we tend to think of the high Arctic as being unaffected by humans locally.”

Results of the study will be published in the Proceedings of the National Academy of Sciences on-line early edition the week of Jan 26.

The researchers conducted their study on Somerset Island in the Canadian Arctic, where prehistoric Thule whalers (ancestors of the present day Inuit) had the highest concentration of settlement between 400 and 800 years ago. They brought with them a well-developed whaling technology that included large open skin boats, whaling harpoons and lances, and seal skin floats. A semi-nomadic people, the Thule settled in temporary camps each summer, and in the winter returned to semi-permanent villages constructed partially from whalebone.

According to James Savelle, the McGill University archeologist on the research team, while the number of bowheads killed each year would have varied, during the more productive whaling seasons four to six animals may have been landed. The Thule were clearly very innovative, and developed methods to use well over 60% of the whale for food, fuel, and even building materials for their houses. “That’s a lot of biomass, and therefore potential nutrients, available for the surrounding ecosystem,” adds team member Jules Blais, a biologist from University of Ottawa.

It was the decomposing bones and flesh of the whale – and probably other sea mammals such as seals – slowly leaching nutrients into a nearby shallow pond and surrounding soil that permanently altered the area’s ecology. To reconstruct this history, the team collected sediment cores from the bottom of the pond and analyzed the fossil “markers” (tiny algal cells) preserved in each layer. As sediments slowly accumulate over time, they represent an archive of past environmental change.

Diatom algae, characterized by glass walls, provide an excellent record of past lake conditions, explains Dr. Smol. The markers indicate a substantial increase of moss growth and nutrients in the water, coinciding with deposits of nutrient-rich whalebones and other refuse. “It’s as if the pond had been fertilized, changing the type of algae that could grow there,” he says. The researchers also believe the moss growth increased considerably as a result of human interference – and in fact may have acted as a “positive feedback system” encouraging them to stay in the area, since moss was used as insulation in the construction of their dwellings.

Dr. Douglas, the team leader, calls their study “a good example of how lake and pond sediment analysis can be used to study the effects of human activities on ecosystems. In the future we hope to apply these techniques to investigate other archeological sites – some of which go back even farther – in the Arctic and elsewhere,” she says.