Home / Ecology, The Environment and Conservation / NASA learning to monitor coral reef health from the sky
15.12.2003

NASA learning to monitor coral reef health from the sky 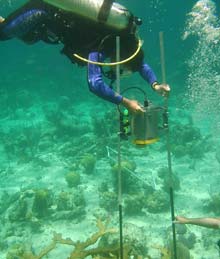 Coral reef health may be accurately estimated from sensors on airplanes and satellites in the future, according to a NASA scientist who is the principal investigator in a collaborative project to develop a method to remotely sense coral health.

Sometimes called the “bellwether of the seas,” coral reefs can give first indications of marine ecosystem health. “Scientists can use coral health as a sensitive indicator of the health of the marine environment,” said Liane Guild, a scientist at NASA Ames Research Center, Moffett Field, Calif.

“We’re looking into how you could remotely detect coral reef health using aircraft with visible light sensors,” Guild said. “First, we have to look at the coral close up, underwater, to see what spectral reflectance the sensor picks up from diseased, stressed and healthy coral.”

One of the first steps her team took to develop aerial coral monitoring was to take undersea light-reflectance readings of elkhorn coral with a handheld spectroradiometer, or light meter. A team of four scuba divers, from the Universities of Miami, South Florida and Puerto Rico, helped Guild take the first readings at varying depths in summer 2002 near Andros Island, Bahamas, with assistance from the U.S. Navy Atlantic Undersea Test and Evaluation Center. A spectroradiometer measures the amount of ultraviolet, visible and infrared light reflected from an object, and is similar to sensors aboard remote-sensing airplanes and satellites.

“We moved up from the coral, little by little, to the surface to learn how light intensity decreases in the water column, which affects our coral reflected-light readings,” Guild said. “There also will be a layer of atmosphere between the coral, the water and the sensor when it eventually flies aboard an airplane to survey the reefs,” she added.

“The effects of the atmosphere on light are pretty well known, but the challenge is to correct for the effects of the layer of water over the coral,” Guild explained. “Instead of taking the top-down approach, we are going from the bottom up to the airplane, and later to satellite-sensing of coral health,” Guild said.

“Ultimately, we plan to fly ’hyperspectral’ instruments, containing many detectors that collect information in the visible light range,” Guild explained. These instruments will provide the most useful information about coral-reef community health from above the sea, according to Guild.

The team’s research emphasis is on Acropora palmata, or elkhorn coral, a major reef-building coral. It is prevalent in the study area, but is suffering from “white band disease.” Elkhorn coral is on the verge of becoming an endangered species because it has severely declined in many areas of the Caribbean, Guild noted.

The team and engineering scientists from the University of Arizona also are developing a specialized computer model to analyze coral reflected-light data. The computer model will help scientists better interpret the raw data gathered by aircraft or satellites.

Guild will discuss her group’s work at the Fall Meeting of the American Geophysical Union on December 9, at 8:45 p.m. EST, in room 3000 of the Moscone Convention Center, San Francisco.

The research is funded by NASA’s Earth Science Enterprise, which is dedicated to understanding the Earth as an integrated system and applying Earth System Science to improve prediction of climate, weather and natural hazards using the unique vantage point of space.