Home / Ecology, The Environment and Conservation / Are cities changing local and global climates?
15.12.2003 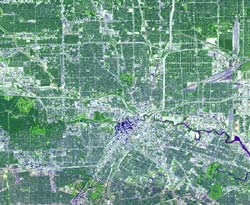 New evidence from satellites, models, and ground observations reveal urban areas, with all their asphalt, buildings, and aerosols, are impacting local and possibly global climate processes. This is according to some of the world’s top scientists convening in a special session at the Fall Meeting of the American Geophysical Union in San Francisco.

To study urban impact on local rainfall, Dr. J. Marshall Shepherd of NASA’s Goddard Space Flight Center, Greenbelt, Md., and Steve Burian of the University of Utah, Salt Lake City, used the world’s first space-based rain radar, aboard the Tropical Rainfall Measuring Mission (TRMM) satellite, and dense rain gauge networks on land to determine there are higher rainfall rates during the summer months downwind of large cities like Houston and Atlanta. Burian and Shepherd offer new evidence that rainfall patterns and daily precipitation trends have changed in regions downwind of Houston from a period of pre-urban growth, 1940 to 1958, to a post-urban growth period, 1984 to 1999.

Cities tend to be one to 10 degrees Fahrenheit (0.56 to 5.6 degrees Celsius) warmer than surrounding suburbs and rural areas. Warming from urban heat islands, the varied heights of urban structures that alter winds, and interactions with sea breezes are believed to be the primary causes for the findings in a coastal city like Houston.

To help scientists like Shepherd and Rosenfeld improve understanding of links between city landscapes and climate processes like rainfall, NASA’s suite of Earth observing satellites provides information about the land cover/land use properties that initiate the urban effects. The satellites also track the aerosols, clouds, water vapor, and temperature that describe atmospheric conditions in urban environments. Their measurements allow scientists to make end-to-end studies of urban impacts on the climate system practically anywhere on Earth.

“The space-borne instruments on Terra, Aqua, TRMM, and Landsat provide a wealth of new observations of aerosol particles near and downwind of cities, the cloud optical properties, and surface reflectance characteristics that can help us understand the effects that urban environments have on our atmosphere and precipitation patterns,” said Dr. Michael King, NASA Earth Observing System Senior Project Scientist. “Aura, to be launched in 2004, will add even more data,” he said.

With growing evidence of the effects of urbanization on climate, climate modelers, like Georgia Institute of Technology’s Dr. Robert Dickinson, hope to account for the cumulative effects of urban areas on regional and global climate models. For example, since asphalt has such a large effect on local heat transfer, water run-off, and how winds behave, characterizing asphalt cover is probably the biggest urban effect to be factored into global models.

NASA’s Earth Science Enterprise is dedicated to understanding the Earth as an integrated system and applying Earth System Science to improve prediction of climate, weather and natural hazards using the unique vantage point of space.

Shepherd, King, Rosenfeld, and Dickinson will present their findings during a press conference on Thursday, December 11, 2003, at 3 p.m., PST in Room 2012, Moscone West, at the 2003 Fall Meeting of the American Geophysical Union in San Francisco.

They also will convene a special session, organized by Shepherd and Dr. Menglin Jin of the University of Maryland, detailing these results on Human-Induced Climate Variations Linked to Urbanization: From Observations to Modeling, sessions U51A and U51C, starting on Friday morning, December 12, at 2:00 p.m. PST at MCC 3001-3003. B-roll of video is available on this topic, by calling Wade Sisler of NASA-TV at 301/286-6256.