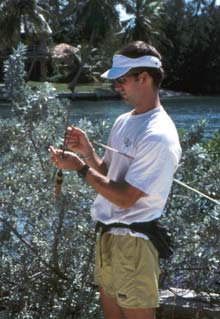 Evolution of genetically distinct species that live exclusively on land can be slowed by over-water dispersal following tropical storms, according to a UCLA study that suggests classic theories of island evolution need an overhaul.

In an article published Thursday, Dec. 4, in the journal Nature, postdoctoral fellow Ryan Calsbeek and Professor Thomas B. Smith of the UCLA Center for Tropical Research report that lizards long thought to be evolving independently on Caribbean Islands in fact exchange genetic material. The reason, according to their 12-month study: Hurricanes and lesser storms wash the lizards into prevailing ocean currents, which carry them from island to island.

“The lizards are being prevented from evolving as quickly as they otherwise would have,” said Calsbeek, the study’s lead researcher. “We can no longer just assume that certain populations evolved independently on separate islands.”

The study questions the widely held view that vast numbers of species of plants and animals on Caribbean, Hawaiian and Galapagos islands evolved separately in isolated microcosms of evolution. As a result, the research sheds new light on the mechanisms of evolution of animals in island habitats and their ability to adapt in the future.

Smith, an evolutionary biologist and director of the Center for Tropical Research at the UCLA Institute of the Environment, explained that the exchange of genes among adjacent islands over time can slow evolution and the ability of animals to adapt to their surroundings. “When islands evolve independently, they maintain their own identity,” Smith said. “When they begin sharing genetic material, their uniqueness begins to disappear, and the process of evolution slows.”

Calsbeek and Smith focused the study on Anolis lizards, a genus of lizards long considered a classic example of adaptive radiation — the process whereby a single lineage rapidly evolves into many species that are adapted to specific habitats. In the case of Anolis lizards, all species share a single ancestor from South America, and changes in body proportions have occurred based on habitat use; species found on the broad trunks of mature trees have longer legs than those found in shrubbery with narrower branches. Anolis lizards, typically 55–65 millimeters in length, are characterized by a colorful throat fan used in signaling other lizards, and a distinctive black, gray and white back pattern.

Calsbeek and Smith captured approximately 50 Anolis lizards from each of five Caribbean islands in June and July of 2002. The researchers weighed and measured each lizard, and removed a tiny tissue sample from each lizard’s regenerative tail to use in DNA analysis. Working in the lab over the following 10 months, they created a genetic profile for each lizard. Given the numbers and frequencies of physical and genetic differences among lizard populations, they determined that lizards were moving between islands.

Next, the researchers sought to explain this unusual flow of genetic material between islands. Smith said they were “stunned to find an exact match between the gene flow and ocean currents, even in exceptional cases where prevailing currents are not in the expected direction.”

Calsbeek said that ocean currents are the most plausible explanation for the gene flow between islands, more likely than human transportation, land-bridges that connected islands more than 10,000 years ago or island colonization by the lizards’ Cuban ancestors.

“It’s quite amazing to think that weather patterns can affect the evolution of island lizards, but the patterns of dispersal match up so well with the direction of ocean currents that the conclusion is almost unavoidable,” Calsbeek said. “Whether similar processes are important for other island groups is a question that needs further investigation, but the lizards have opened the door to new ideas about evolution on islands.”

Previous research has demonstrated clearly that hurricanes can carry animals vast distances. But not until the UCLA study had research provided evidence that over-water dispersal can affect the evolution of individual genes.

Note to Editors: Digital images are available upon request.

The UCLA Institute of the Environment (www.ioe.ucla.edu/) is dedicated to interdisciplinary research to help produce solutions to complex issues related to the environment. The faculty — representing a broad range of disciplines, including the sciences, public policy, engineering, law, business, public health — works together to educate the next generation of professionals, leaders and citizens committed to the health of our planet. The institute includes four centers, including the Coastal Marine Center, the Center for Air Pollution and Exposure, the Center for Tropical Research, and the Center for Urban Sustainability and Predictability.

30.03.2021 / Ecology, The Environment and Conservation
Back to the Homepage