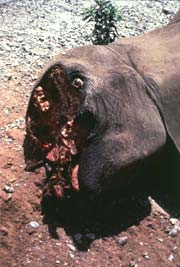 Despite the international ban on selling African elephant ivory, poaching is still widespread. Law enforcers may soon have a new tool for cracking down on elephant poachers: a genetic analysis of ivory can help show which part of Africa it came from.

“[This method] enables determination of where stronger antipoaching efforts are needed and provides the basis for monitoring the extent of the trade,” say Kenine Comstock and Elaine Ostrander of the Fred Hutchinson Cancer Research Center in Seattle, Washington, and Samuel Wasser of the University of Washington in Seattle in the December issue of Conservation Biology.

African elephants dropped from 1.3 million to 600,000 during the 1980s, and international trade in their ivory was banned in 1989 by CITES (the Convention on International Trade in Endangered Species). But poaching still continues and last year the Singapore government seized 6.5 tons of ivory, the largest seizure in the history of the ivory trade. “The flow of illegal ivory appears to have markedly increased in the past year,” says Wasser. One of the problems is that poachers can be hard to spot, especially in the forests of Central Africa.

The researchers adapted their genetic test to ivory, using African elephant tusks that were at least 10-20 years old. Even though tusks are teeth, they still contain some DNA and the researchers found that a small amount of ivory (120 mg, or a cubic centimeter) was enough for the test.

Being able to track the origin of illicit African elephant ivory could help law enforcers pinpoint where poaching is the heaviest, which in turn could both increase ivory seizure rates and deter poachers. In addition, several southern African countries want to relax the ivory ban because they have stores of ivory and lots of elephants. If CITES agrees, being able to track the source of ivory could show if relaxing the ban in southern Africa leads to an increase in elephant poaching in other parts of the continent.

WEBSITES:
The University of Washington’s Center for Conservation Biology (scroll past “Grizzly Bears” to “African Elephant Conservation” and “Impacts of Poaching on African Elephants”) http://depts.washington.edu/conserv/programs.html

For PDFs of papers, please reply to this message.

For pictures provided by the researchers
http://www.conbio.org/SCB/Services/Tips/2003-12-Dec.cfm

For more information about the Society for Conservation Biology
http://conservationbiology.org/