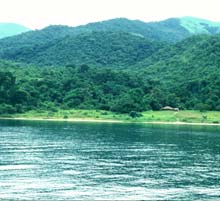 In an important new study directly linking climatic warming with the survival of lake organisms, researchers have found multiple lines of evidence showing that increasing air and water temperatures and related factors are shrinking fish and algae populations in a major lake. The lake holds 18 percent of the world’s liquid freshwater and is a critical food source in East Africa.

Reporting in the August 14, 2003, issue of the journal Nature, Catherine O’Reilly of Vassar College, Andrew Cohen of the University of Arizona, Simone Alin of the University of Washington, Pierre-Denis Plisnier of the Royal Museum for Central Africa in Belgium, and Brent McKee of Tulane University in Louisiana, announce that climate change in the region is harming Lake Tanganyika’s ecosystem, decreasing fish stocks by as much as 30 percent over the past 80 years.

Lake Tanganyika is large and deep, filling the chasm of a rift valley bordering the Democratic Republic of Congo, Tanzania, Zambia and Burundi. An ecosystem unto itself, the lake supports many types of fish. Only a few species are eaten by people, yet they supply 25 to 40 percent of the animal protein for the communities of that region. Recently, the fish supplies have diminished, and catches are shrinking.

“Our research provides the strongest link to date between long- term changes in lake warming in the tropics, recorded by instruments, and declining productivity of the lake’s ecosystem, as seen in sediment cores,” said Cohen. “This work provides a clear indication of the regional effects of global climate change, and especially global warming, on tropical lake ecosystems.”

The researchers measured lake water temperatures, along with air temperatures and wind velocities, and compared data to equivalent records from the past eight decades. Those factors help determine how well water circulates within the lake, a critical factor for the distribution of nutrients that support life in the lake’s food chain.

“This is an important study that demonstrates the dramatic response of a lake ecosystem to changes in climatic and environmental conditions over a relatively short period of time,” said Jarvis Moyers, director of the Division of Atmospheric Sciences at the National Science Foundation (NSF), the independent federal agency that supports fundamental research and education across all fields of science and engineering and a sponsor of this research.

Ultimately, O’Reilly and her colleagues found that temperatures have increased 0.6 degrees Celsius in the air above the lake, with a proportional increase in the water temperature, while wind velocities have decreased.

Those temperature changes stabilize the water column in lakes, especially in the tropics where, unlike in temperate regions, winter cooling and mixing is absent. The increased stability decreased circulation, hampering the re-supply of nutrients from the deep water to the surface waters of the lake where they help algae grow. The algae, which form the base of Lake Tanganyika’s food chain, ultimately feed the commercially important fish.

“Continued climate warming has some severe implications for the nutrition and economy of the region’s people, who depend heavily on the lake as a natural resource,” said O’Reilly. “To date, most studies have found significant effects of climate change in the northern hemisphere,” she added, “while our study indicates that substantial warming is also occurring in the tropics, and that it is having a negative impact on some ecosystems.”

In addition to finding evidence of warming in lake water temperatures and decreased windiness from instrument records, the researchers analyzed organic matter from welldated lake sediment cores and found clues that life in the ecosystem has been on the decline.

Information from the sediments indicated that algae abundance declined 20 percent over the 80-year period for which data exists. The researchers believe the decline is a direct result of the reduction in lake circulation. Based on earlier studies of other lakes, that decline would lead to a 30 percent reduction in fish stocks, in addition to any possible effects of over- fishing.

“The fisheries of Lake Tanganyika currently yield approximately 200,000 tons of fish per year, and are far and away the most important source of animal protein for human consumption in this region of Central Africa,” said Cohen. SGiven the already significant problems of malnutrition and civil conflict in central Africa, a significant decline in fishing yields resulting from climate change could lead to extremely serious consequences for the region’s food supply,” he added.

NSF supported this research through the Nyanza Project, an interdisciplinary research training program for undergraduate and graduate students and secondary school teachers based at the University of Arizona at Tucson. This project, part of the NSF Research Experiences for Undergraduates program, supported O’Reilly and Alin, who were graduate students when they conducted the field and lab work. O’Reilly is now visiting assistant professor of environmental science at Vassar College and a faculty member of the Nyanza Project. The project also supported undergraduates who collected lake-water temperature data. Major funding for the broader lake research came from the United Nations Global Environmental Fund’s Lake Tanganyika Biodiversity Project.