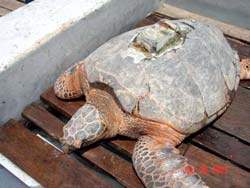 Named "Miss Pearl" by Nicaraguans and Wildlife Conservation Society researchers, this adult female hawksbill turtle has returned to her nesting beach on the Pearl Cays off the coast of Nicaragua after three years of travel. Scientists were able to follow Miss Pearl’s movements throughout the Caribbean via a satellite transmitter, which was affixed to the turtle’s back during her last visit to shore. She traveled farther than any other hawksbill with a satellite transmitter, reaching the border of Honduras waters. She is alive and well

When Miss Pearl finally returned to the Pearl Cays in Nicaragua last month after a three-year hiatus, it was cause for celebration. Best of all, her transmitter was still attached.

Named by local Nicaraguan participants and scientists from the New York-based Wildlife Conservation Society (WCS), Miss Pearl is a female hawksbill sea turtle, one of the most endangered of this ancient tribe of sea-going reptiles. In 2000, she had already distinguished herself by traveling farther than any other hawksbill WCS had tagged, venturing nearly 250 miles to the Honduras border. Now that she made the return trip back to the nesting beach where scientists originally tagged her, those working on the project were ecstatic.

“This is fantastic and incredible,” said WCS conservationist Dr. Cynthia Lagueux, who runs WCS’s sea turtle project in Nicaragua. “We are really starting to get some good data about this nesting population.”

A week earlier, WCS scientists had another pleasant surprise, when a previously tagged turtle named “Midsi” came ashore to nest. Though her transmitter had been removed by a lobster diver in 2001 and returned, along with two flipper tags, scientists were unsure if she was still alive until her return to the nesting beach this year.

The National Marine Fisheries Service (NMFS) supplied several transmitters in a cooperative effort to protect hawksbills, which sometimes venture into U.S. waters. Attached to the turtle’s carapace, the devices send signals on location and diving patterns to researchers’ computers via orbiting satellites. WCS uses the data to focus its efforts on where Pearl Cays hawksbill sea turtles need the most protection.

More important than high-tech tools, however, is the education of local people about protecting sea turtles, both at sea and when they are laying eggs on nesting beaches, which may in fact be doing more to bolster local populations.

“Most everyone is really cooperating with our plea to stop killing hawksbills and taking their eggs,” Lagueux said. “We’ve had several local fishers and divers tell us they understand what we are trying to do and that they won’t take anymore eggs.”

Before the WCS project began, virtually all hawksbill sea turtle nests were poached for their eggs. Recent surveys have shown that the number has dropped to an amazing ten percent or less, due almost entirely to education efforts.

But Lagueux warns that loss of sea turtle nesting habitat now looms as one of the largest threats. Recent development of several of the nesting cays by foreign investors is destroying many prime nesting beaches.

According to WCS scientists, the Nicaragua government has made recent attempts to combat these threats, however, stronger measures are needed, as they have not yet been successful at protecting this invaluable sea turtle nesting habitat.