Home / Ecology, The Environment and Conservation / Cold-climate creatures may be the ultimate survivors of global warming, study finds
04.07.2003

Cold-climate creatures may be the ultimate survivors of global warming, study finds 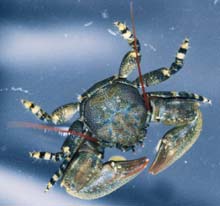 Science has a way of forcing us to reexamine some of our basic assumptions about nature. Consider the following statement: Animals that thrive in high temperatures are more likely to survive global warming than those that are less tolerant to heat. While this conclusion may seem obvious, a new study in the journal Science finds that the opposite may be true.

In an experiment published in the July 4 edition of Science, Stanford University postdoctoral fellow Jonathon H. Stillman examined the effect of climate change on porcelain crabs (genus Petrolisthes) – inch-long invertebrates that inhabit coastal areas throughout the Pacific Ocean. Stillman discovered that porcelain crabs in the cool Pacific Northwest have the ability to adjust to larger increases in habitat temperature than crabs living in the warm coastal waters of Mexico.

The study showed that cold-water crabs have a greater capacity to adjust their heat-tolerance thresholds than warm-water crabs,” said Stillman, who conducted the experiment at Stanford’s Hopkins Marine Station in Pacific Grove, Calif. This is definitely counterintuitive. You would expect heat-tolerant organisms to be the most resilient to global warming, but it turns out they may have a harder time surviving as their habitat temperatures increase,” he added, noting that a half-degree increase in the Earth’s temperature could be enough to wipe out countless porcelain crabs:

Stillman’s experiment focused on four species of porcelain crab – two from the chilly coast off Cape Arago, Ore., and two from Puerto Peñasco, Mexico, located on the Gulf of California.

The Oregon species – P. cinctipes and P. eriomerus – reside in intertidal habitats where ocean temperatures range from 47-59 degrees F (8-15 C). The temperature of P. cinctipes, which lives higher on shore in the upper intertidal zone, can be as high as 88 F (31 C) during summer low tides.

For the experiment, Stillman collected live specimens of all four species and transported them to Hopkins Marine Station where they were kept in temperature-controlled aquariums for several weeks. Crabs from Oregon were held at a constant temperature of either 47 F (8 C) or 65 F (18 C), and crabs from Mexico were kept at temperatures of 59 F (15 C) or 77 F (25 C).

“The idea was to allow the animals to acclimate to cold or warm temperatures that reflect what they’d likely encounter in the wild,” Stillman explained.

Once acclimated, each crab was fitted with electrodes to allow monitoring of cardiac activity. The animal then was placed in an experimental chamber where the temperature was either raised or lowered 0.1 C every minute until its heart stopped beating – a point known as the “upper thermal tolerance limit.” The goal was to determine which crabs were most likely to survive a temperature increase of 4-6 F (2-3 C), which climate experts say could occur in the next century as a result of global warming.

“The results were surprising,” Stillman said. It turned out that cold-water crabs were able to change their upper thermal tolerance limit much more readily than those from hotter climates. In fact, the top survivor in the experiment was Oregon’s P. eriomerus, which lives in the coolest habitat of all four species studied. Stillman discovered that P. eriomerus crabs that were acclimated to 47 F (8 C) temperatures succumbed when the thermometer reached 83 F (28.5 C). However, those acclimated to 65 F (18 C) tank water survived temperatures of nearly 87 F (30.5 C).

“That’s a change of 4 F (2 C) in the upper thermal tolerance limit, which shows that P. eriomerus has a strong capacity for thermal acclimation,” Stillman said. “And since the maximal habitat temperature for this species is around 61 F (16 C), this species would likely survive a 4-6 F (2-3 C) temperature increase caused by global warming.”

“Thus, during the hottest summer low tides, P. gracilis experiences habitat temperatures right at the edge of its thermal range,” Stillman observed. “Because this species has a limited capacity to adjust that range, it will be impacted by global warming-related increases in habitat temperature.”

Stillman concluded that species with the greatest capacity to change their upper tolerance limits, such as P. eriomerus, were the least heat-tolerant: “On the other hand, creatures such as P. gracillis, which have evolved the greatest tolerance to high temperatures, have a lower capacity for thermal acclimation – and it’s those species that will be the most susceptible to global warming. Perhaps it’s an evolutionary trade-off: To survive those really high temperatures in the summer, these animals havegiven up their ability to adjust their thermal limits.”

According to Stillman, even a relatively small rise in global temperatures could have dramatic consequences: “Species like P. gracillis won’t be able to acclimatize to a 0.5 C climate change, but species like P. eriomerus will be fine.”

He noted that global warming already appears to have reduced the population of P. cinctipes – a species that ranges from California to British Columbia. However, Stillman points out that skeptics – including several leading economists – question whether such biological change is the direct result of climate change.

“My colleagues at Stanford have shown that, in the last 60 years, P. cinctipes and other marine invertebrates have been moving northward as sea surface temperatures rises,” he said. “Perhaps this study will provide a physiological mechanism that explains why this and other population shifts are occurring around the world.”

Stillman is expected to join the faculty of the University of Hawaii at Manoa in August. His study was supported by grants from the National Science Foundation and the David and Lucile Packard Foundation.

EDITORS: The study, “Acclimation Capacity Underlies Climate Change Susceptibility,” appears in the July 4 issue of Science. A copy of the embargoed study can be obtained from the AAAS Office of Public Programs in Washington, D.C., at 202-326-6440 or scipak@aaas.org. A photo is available at http://newsphotos.stanford.edu (slug: “Crab”).