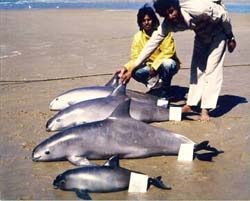 Vaquita (Phocoena sinus). The world’s smallest porpoise, the vaquita has a gray back fading to a white belly, with black eye rings and dark patches surrounding its lips. This critically endangered species is restricted to the upper Gulf of California and is very rarely seen. <br>Credit: Conservation International/Aleja <br>&copy; Conservation International/Alejandro Robles <br>

For the first time ever, the world’s largest environmental organizations, working with scientists, the business community and international governments, met specifically to develop a comprehensive and achievable agenda to reverse the decline in health of the world’s ocean.

The five-day Defying Ocean’s End (DOE) conference marked the launch of a new, science-based international effort to restore and maintain the health of marine systems. The gathering resulted in several preliminary recommendations:

“The health of humankind is directly related to the health of the ocean – and the ocean and the marine life that calls it home is in real trouble,” said Sylvia Earle, Executive Director of Conservation International’s Global Marine Program and DOE co-convener. “We couldn’t afford yet another meeting where we just sat around and created a wish list, so we formed Defying Ocean’s End to take unprecedented and bold steps forward.”

To ensure the agenda from Defying Ocean’s End becomes reality, an anonymous donor today provided Conservation International, the coordinating organization of the DOE conference, a $5 million, five-year grant. The grant requires $4 million in matching funds, to bring the total to $9 million of funding.

The world’s ocean and the marine life it harbors are collapsing. A major study in Nature last month reported that fully 90 percent of large, predatory fish populations, including tuna and marlin, have disappeared, mostly due to over-fishing and destructive fishing methods. Other threats, such as coastal development, pollution and climate change, are also devastating marine life.

“It’s stunning to consider that in the past few decades, we have done away with the vast majority of large fish in the ocean and significantly altered the way marine systems operate,” said Intel founder Gordon Moore, co-convener of the DOE conference. “By using sound science and implementing an achievable action plan, we still have a small window of opportunity to reverse these trends.”

“The world’s ocean is the last living frontier on Earth. Its diversity and productivity exceed that of any on land, but has barely been explored,” said Graeme Kelleher, DOE conference chair. “We have an opportunity and obligation now to protect the ocean for the future welfare of humans, other animals, and marine plants. This conference was a major step toward defying ocean’s end. Prevention now is better than scrambling for a cure later.”

The Defying Ocean’s End conference was convened to help reverse the decline in health of the world’s ocean. Leaders from Conservation International, Environmental Defense, International Seakeepers Society, IUCN-World Conservation Union, Natural Resource Defense Council, Ocean Futures Society, Seaweb, The Nature Conservancy, The Ocean Conservancy, Wildaid, Wildlife Conservation Society, World Resources Institute and World Wildlife Fund attended among others, as did representatives from government, industry and academia. In total, more than 100 marine experts from 20 countries participated. The conference was convened by Sylvia Earle and Gordon Moore and was supported by The Gordon and Betty Moore Foundation.