The Pied Piper of Fish 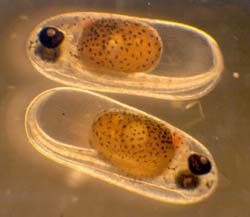 Fishy noises could be the answer for improved reef fisheries management according to an international team of researchers.

Some juvenile coral reef fish are attracted by sounds they would have heard while they were in the egg. By using these sounds, the fish can be led to artificial reefs where they will start new colonies. It may be possible in the future to lead young fish into overfished areas, and super-stock Marine Protected Areas.

Marine biologist Stephen Simpson of the University of York fronts the international team. He explains, “Many coral reef fish are spawned on the reef, and while the eggs develop, their noisy parents look after them. Once they hatch, the ant-sized fish escape out to sea for a month to escape the many predators on the reef. There they develop into juveniles. They wait for the new moon and then, under the cloak of darkness, they cross the ‘wall of mouths’ to settle on a reef. This research has also solved a mystery – how they choose a reef has baffled us for many years.”

Working at Lizard Island on the Great Barrier Reef, the researchers have used noise to persuade fish to settle on artificial reefs. In addition, by playing comparable noises to fish eggs, Simpson and Dr Hong Yan at University of Kentucky discovered that embryos would hear the noises made by the fish on their reef before they have even hatched.

Simpson explains, “The noise consists of the pops, bangs, whoops and trumpet sounds used by nocturnal fish to communicate as they hunt. A background crackle is also made by bubbles popping at the clawtips of snapping shrimps. The difference in noise during the day and at night can be compared to a quiet suburban street and rush hour traffic,”

Working alongside Dr Mark Meekan of the Australian Institute of Marine Science, Simpson put speakers into artificial reefs, and found that fish used the recorded noises to find a place to settle. “The number of fish arriving on noisy reefs was six times the amount that went to the silent reefs. These experiments provide substantial evidence that fish use reef sounds to navigate when seeking suitable spots to make their home” he says.

This suggests that their memories may become imprinted with the noise of their particular reef – information that could be essential when they are later choosing where to settle.