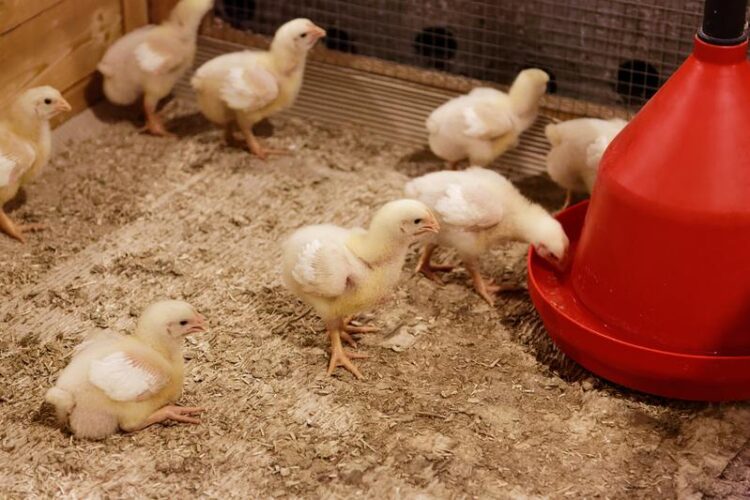 The University of Hohenheim taps into a new source of protein: an on-farm biorefinery produces protein-based feed for pigs and poultry, other high-quality raw materials, and energy.

A tasty dish for chickens: Researchers from the University of Hohenheim in Stuttgart were able to feed the animals the first 50 kilos of protein extract that were obtained from pasture. Yet the plants found in fields and meadows offer much more than a new source of protein for pigs and poultry: They could also constitute an alternative to soy for human nutrition. They also form a basis for organic-based plastics and paper, energy, and fertilizers. To tap into this vast potential, three working groups from Hohenheim are investigating the possibilities as part of the circular economy in the project “Protein from pastures – ProGrün”. The Baden-Württemberg Ministry for Rural Areas and Consumer Protection is backing the project with around EUR 1 million of funding, thereby making it a research heavyweight at the University of Hohenheim.

Grass and other plants in pastures contain a great deal of protein. However, only grazing animals like cows and sheep could take advantage of it – or so it was believed for a long time. When the protein in plants from pastures is extracted from the plant structure first, it can also be suitable as animal feed for non-grazing animals, as researchers from the University of Hohenheim have shown in the ProGrün project.

All of this can be achieved as part of an organic and sustainable circular economy: After all, the rest of the biomass can also be used to produce high-quality materials and generate heat and energy. To achieve this, a model biorefinery was set up at the “Unterer Lindenhof” agricultural studies test site at the University of Hohenheim, allowing the entire process to be tested on a pilot scale. “This means we’ve got everything we need – a biorefinery, grass, chickens, and pigs – to build a miniature organic economy,” said project coordinator Prof. Dr. Andrea Kruse from the Department of Conversion Technologies of Biobased Resources.

At present, soy serves a large proportion of humans’ and animals’ protein needs. This causes several problems: First of all, soy is mostly grown outside of Europe in a way that is frequently not sustainable or environmentally-friendly. At the same time, imports are bringing more and more nitrogen compounds to Europe, which make their way onto fields through manure with negative consequences for the environment.

After being exported to Europe, these nitrogen compounds are then absent from the country of cultivation. “This deficit needs to be addressed with mineral fertilizers. Both the transport of soy and the production of mineral fertilizers consume a great deal of energy, thereby creating significant amounts of carbon dioxide emissions,” explained the organic economy expert Prof. Dr. Kruse.

No competition with food production

However, options are limited for replacing soy protein with other proteins grown locally or in Europe. Thus far, pastures have been an underestimated source of protein in this respect. Spanning 4.7 million hectares, permanent pasture in Germany constitutes over a quarter of all agricultural land. It also does not compete with food production.

Currently, only part of this is used directly as feed; Grassland clippings that occur as part of landscape maintenance as well as material from orchards, meadow orchards, agricultural ancillary areas, etc. are often not used as feed.

A protein composition comparable with soy

As non-grazing animals are incapable of metabolizing this green fodder, an intermediate step for extracting and pulping the digestible proteins is necessary. To achieve this, most of the grass is crushed and pressed first. The result is press juice with a high level of soluble proteins as well as a residual amount of carbohydrates and other chemical compounds. The solid components and around two thirds of the protein remain in what is known as the press cake.

“Sugar, acids, and other substances in the press juice can impede the ability of proteins to be digested,” explained Prof. Dr. Rodehutscord from the Department of Animal Nutrition. These are therefore mostly separated out. The proteins are then carefully dried, mixed with other animal feed components, and then turned into pellets. “By using this process, around 45 metric tons of freshly cut grass can be turned into protein-rich animal feed with a 1,000-kilogram protein component,” added Prof. Dr. Reinhard Kohlus, director of the Department of Process Engineering and Food Powders.

“The composition of amino acids in the protein extract is roughly similar to that of soy,” said Prof. Dr. Rodehutscord, “which in principle makes it well-suited for feeding chickens and pigs.” His colleague Dr. Wolfgang Siegert pointed out an issue that the researchers had to overcome: “The animals have to like how the feed tastes, too, or they won’t eat it. We had to do a few initial preliminary tests. Now, however, we’ve been able to feed the first 50 kilos to chicks.”

In the long term, the experts believe it will also be possible to use the protein extract obtained to feed humans.

The remaining biomass also needs to be used in line with the principle of the circular economy. “This allows the press cake produced to be used to make grass paper or fiber matting for insulation,” explained Prof. Dr. Kruse.

“As it still contains enough protein, the press cake is also suitable for feeding cattle. And last but not least, it can also be used in a biogas facility. Their digestate is applied to the fields as fertilizer, thereby closing the nutrient loop,” added her colleague, project manager Przemyslaw Maziarka.

The carbohydrates and sugar in the press juice are also a promising base material for producing what are known as platform chemicals, such as HMF (5-hydroxymethylfurfural), which forms the basis for the production of organic-based plastics. “We turn the sugar straight into juice and then extract the HMF produced,” he said, describing the process.

“Ultimately, this approach from Hohenheim is a development of the existing concepts where the aim is to maximize value creation from press juice and press cake,” added Prof. Dr. Kruse. She believes small on-farm biorefineries are the key to closing loops and protecting the environment, nature, and climate.

A key aspect is that the facilities consist of individual modules that can be combined according to the requirements. “If you efficiently sequence different processes, biomasses are processed along the entire value chain into food products, animal feed, active ingredients, materials, chemicals, and energy,” Prof. Dr. Kruse stated.

BACKGROUND: Animal testing at the University of Hohenheim

The University of Hohenheim seeks to obtain and impart knowledge for the benefit of all living things and to protect our planet. For the foreseeable future, this is not possible without using animals for research and study.

For the feed testing, 200 broiler chickens were kept in groups at the Agricultural Experiment Station and fed with the pasture protein extract. The growth, feeding, and behavior of the chickens were observed. This does not legally constitute animal testing.

More information is available at https://www.uni-hohenheim.de/en/animal-experiments