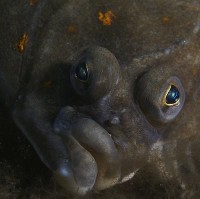 North Sea plaice is the most commonly fished flatfish in Europe, with landings of around 120 000 tons per year. But if current trends continue, evolutionary changes will lead to a decreased catch of North Sea plaice, according to a new study in the Canadian Journal of Fisheries and Aquatic Sciences.

Previous research has shown that fishing can cause evolutionary changes in fish populations, with impacts such as earlier maturation or smaller size. These impacts have already been observed in the plaice fishery. In addition to reducing the amount of fish available for catch, researchers surmise that such changes will be difficult or slow to revert and can make fish populations more vulnerable to collapse.

“When you remove the largest fish from a population, you also remove them from the gene pool. Over a few generations, this can lead to smaller fish that mature at an earlier age, which translates into a smaller catch for fishers,” explains IIASA Evolution and Ecology Program Director Ulf Dieckmann.

“This study is the first to combine the quantification of evolutionary impacts for a specific stock with tailored projections for different management scenarios,” says study leader Fabian Mollet, a fisheries consultant at the company Blueyou, who was a participant in the IIASA Young Scientists Summer Program.

To conduct the study, Mollet and colleagues applied models using the Evolutionary Impact Assessment framework, developed by IIASA researchers to provide fisheries managers with a set of tools to understand the potential impacts of evolutionary change on fisheries.

Underscoring cautionary findings reported in earlier IIASA studies, for example on Northeast Arctic cod fished north of Norway and on northern cod caught east of Canada, the new research draws attention to the accumulating ‘Darwinian debt’ current fishing practices are incurring: each year these practices are continued are likely to require many more years of different fishing practices before the exploited stocks can recover from the evolutionary changes fishing has imposed on them.

Management practices that target fish differently from current practices could help mitigate the problem and maintain a higher sustainable catch, the study shows. By shifting fishing pressures from the largest fish to intermediately sized fish, fisheries managers could ensure that the population stays stable from an evolutionary perspective.

The International Institute for Applied Systems Analysis (IIASA) is an international scientific institute that conducts research into the critical issues of global environmental, economic, technological, and social change that we face in the twenty-first century. Our findings provide valuable options to policymakers to shape the future of our changing world. IIASA is independent and funded by prestigious research funding agencies in Africa, the Americas, Asia, Europe, and Oceania. www.iiasa.ac.at