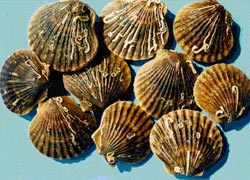 Credit: NOAA<br><br>One of the organisms used in the study, bay scallops. <br>

Ocean dead zones – regions with levels of oxygen too low to sustain marine life – have grown to become a common feature of coastal regions around the world. A new study published in the January 8 issue of PLOS One by Christopher Gobler, Professor in the School of Marine & Atmospheric Sciences at Stony Brook University and colleagues, has found that low pH levels within these regions represent an additional, previously unappreciated, threat to ocean animals.

For decades, marine biologists have investigated the effects of low oxygen on marine life without considering pH levels. In reality, low oxygen waters are also acidified waters, but studies investigating how these two conditions affect marine life together have been lacking.

In a series of experiments on young bay scallops and hard clams, marine organisms of significant economic and ecological value, the investigators found that the combined effects of low oxygen and low pH led to higher rates of death and slower growth than by either individual factor. Further, in some cases there was negative synergy between these environmental factors, which means that the performance of the animals was worse than predicted by either individual factor.

“Low oxygen zones in coastal and open ocean ecosystems have expanded in recent decades, a trend that will accelerate with climatic warming,” said Gobler. “There is growing recognition that low oxygen regions of the ocean are also acidified, a condition that will intensify with rising levels of atmospheric CO2 due to the burning of fossil fuels causing ocean acidification. Hence, the low oxygen, low pH conditions used in this study will be increasingly common in the World’s Oceans in the future.”

Dr. Mark Green, a professor at Saint Joseph’s College of Maine and an expert on the effects of ocean acidification on shellfish praised the study.

“The relationship between pH and oxygen is well documented in near shore locales yet, as the authors state, the combined impact of the two has remained unexplored,” said Green. “This is a great paper; it will have an impact, particularly on those scientists that have worked to understand the effect of chronic low oxygen on the physiology of marine organisms.”

Dr. Baumann believes this study may alter how future research into Dead Zones may be conducted.

“We suggest that recently discovered low pH sensitivities in many finfish and shellfish larvae, and the compounded effects of low pH and low oxygen in shellfish relative to each individual parameter should prompt a re-alignment of future studies,” said Baumann. “A comprehensive evaluation of the combined effects of low oxygen and acidification on marine life will be critical for understanding how ocean ecosystems respond to these conditions both today and under future climate change scenarios.”

About the School of Marine and Atmospheric Sciences at Stony Brook University
The School of Marine and Atmospheric Sciences (SoMAS) is the State University of New York's center for marine and atmospheric research, education and public service. With more than 85 faculty and staff and more than 500 students engaged in interdisciplinary research and education, SoMAS is at the forefront of advancing knowledge and discovering and resolving environmental challenges affecting the oceans and atmosphere on both regional and global scales.