Home / Ecology, The Environment and Conservation / Ocean acidification – a problem in the tropics?
28.10.2011

Ocean acidification – a problem in the tropics? 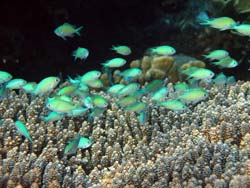 By burning fossil fuels, humans release carbon dioxide into the atmosphere. Carbon dioxide is then absorbed by the oceans where it reacts with water to form carbonic acid. The more acidic the water becomes, the lesser will be the amount of free carbonate ions. Carbonate is an essential component of the calcium carbonate structures built by many organisms such as corals, clams, snails or calcareous algae.

How organisms react to ocean acidification is currently one of the hottest topics in marine ecology and biogeochemistry. More specifically, marine scientists are trying to understand what is the combined effect on marine life of different disturbing factors like warming, eutrophication and ocean acidification. Coral reefs seem to be particularly sensitive to ocean acidification, with worse predictions suggesting that coral reef ecosystems may disappear by the end of this century.

Given the growing concerns, ocean acidification is rapidly becoming a topic of large-scale research projects. In Germany, for example, a national initiative for a coordinated project entitled “Biological Impacts of Ocean ACIDification” (BIOACID) has been financially supported by the German Ministry of Education and Research (BMBF). BIOACID is closely coordinated with the European Project on OCean Acidification (EPOCA) funded as part of the 7th EU Framework Programme. Some ZMT scientists are actively contributing to the EPOCA research efforts. In addition, ZMT ecologists, geologists, socioeconomists and modellers are developing multidisciplinary cooperative projects on the topic.

The symposium will be an exciting opportunity to hear about the current state of acidification research and to discuss the relevance of the problems to tropical marine ecosystems.