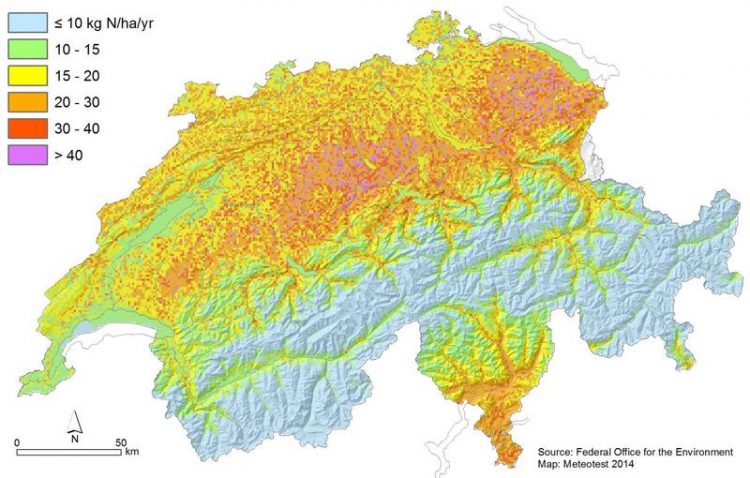 Nitrogen is an essential plant nutrient that used to be available only in limited amounts. Many ecosystems rich in plant species are adapted to low nitrogen availability. An increase in nitrogen availability often favors a few highly competitive species, resulting in a decrease of the overall plant diversity.

The researchers compared six different measures of plant diversity on 381 randomly selected study plots in Switzerland. The plots were each one square kilometer in size and located between 260 and 3200 meters elevation. In all six measures, the researchers found a negative relation to atmospheric nitrogen emissions.

“Negative effects of nitrogen deposition on plant diversity were so far known from small-scale studies conducted mostly in areas of high conservation value”, says first author Tobias Roth. “We wanted to know whether these effects are also evident when looking at entire landscapes and different elevations”.

The weakest relation was found in the traditionally measured species richness, which measures the number of plant species per plot. The biologists found the strongest effect in the so-called phylogenetic diversity, a measure that compares DNA sequences. High nitrogen deposition thus leads to plant species being more strongly related to each other.

Compared to the historic reference value, the loss in traditionally measured plant species richness was 5 percent. The researchers also compared the data to nitrogen deposition measures from 1880, during the industrialization in Europe. The loss in phylogenetic plant diversity in this case was still 11 percent.

“High plant diversity is important to us humans for many reasons”, says Valentin Amrhein, co-senior author. “For example, in the mountains, a larger number of plant species with different root depths will stabilize the soil more effectively and prevent erosion”.

The 381 plots were investigated as part of the program “Biodiversity Monitoring Switzerland”, a program conducted on behalf of the Federal Office for the Environment. According to the Federal Commission for Air Hygiene, emissions produced in agriculture are responsible for two thirds of the nitrogen deposition in Switzerland. Nitrogen oxides produces by burning of fossil fuels are responsible for the other third.