Home / Ecology, The Environment and Conservation / Mine water as valuable water resource and important recyclables provider
30.03.2021 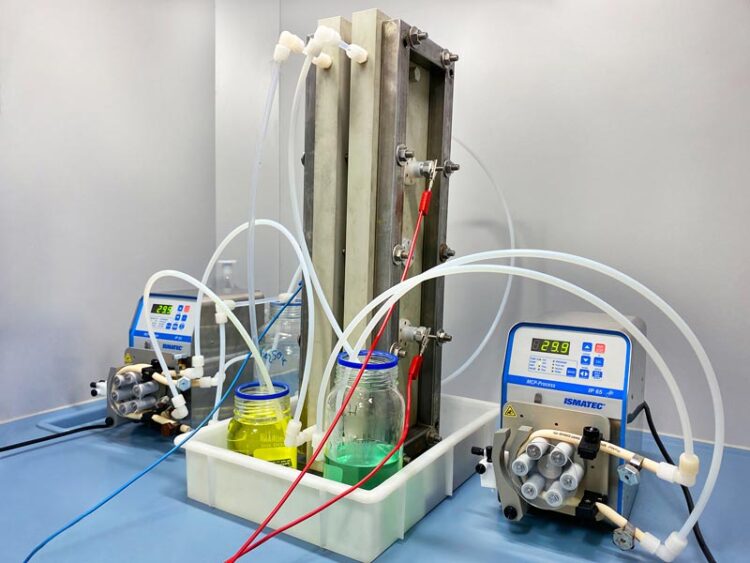 Fraunhofer IKTS develops highly efficient combined electrodialysis and electrolysis processes for the preparation of mine and mining water, which will be tested in the tin ore mine in Ehrenfriedersdorf/Erzgebirge.
© Fraunhofer IKTS

Technological progress is not possible without raw materials from mines – e-mobility or digitalization come to mind. However, in order to minimize the subsequent ecological damages of mining, a consortium led by Fraunhofer IKTS puts efficient technologies for treating mine and mining waters to the test. These are intended to purify contaminated water, so that it can be used as process water and additional recyclables can be recovered. For pilot tests under real conditions, the research association secured itself access to an underground test site – a tin ore mine in the Erzgebirge (Ore Mountains).

The site for the pilot project “TerZinn”, funded by the Federal Ministry of Education and Research (BMBF) was deliberately chosen because the mining tradition in the Erzgebirge reach back to the 13th century and the subsequent damages are still noticeable today – as the example of the old Ehrenfriedersdorf mine shows. In addition to iron, fluoride, and sulfate, about 1.2 tons of arsenic compounds at the disused tin ore mine pollute the environment every year. In Hamburg, approximately 4 percent of the arsenic in the Elbe water can be attributed to the Ehrenfriedersdorf mine. The impacts in the immediate vicinity of the old mine are also significant. For years, the Ehrenfriedersdorf community has recorded a high amount of arsenic in its sewage sludge so that it needs to be disposed of as hazardous waste.

Treating contaminated mine water – several million cubic meters per year – so that it can be used as process water is the most important goal of these pilot tests. For the region, the benefits would be great. Silke Franzl, mayor of the Ehrenfriedersdorf community, therefore welcomes the commitment of the project consortium explicitly: “The people in Ehrenfriedersdorf and its vicinity hope for innovations that provide clean water. The focus for us is on the removal of pollutants from mining waters and soils in order to not only minimize the negative impact on people and the environment but also the vast financial costs.”

Within the framework of the pilot tests, recyclables shall also be extracted from the mine water. This could help cover the operating costs of a later large-scale plant at least in part. For example, eight tons of fluoride are rinsed out with the water from the old mine every year. If these compounds are successfully separated, fluorspar – an important base material for the metal or glass industry – could be processed further. Other elements from the water could be used to produce several hundred tons of ammonium sulfate fertilizer per year. Furthermore, the project consortium will examine to what extent strategic raw materials, such as lithium, indium or tellurium, can be obtained.

Until the end of 2023, the project partners intend to install and test different plant modules in the tunnel system. Fraunhofer IKTS has high hopes for the electrochemical processes with which the particularly toxic trivalent arsenic can be transferred to easier separable pentavalent arsenic. In addition, further pollutants can be selectively separated. “These electrochemical technologies previously had a reputation for being too expensive. We want to prove that this is not the case”, explains Hans-Jürgen Friedrich, project coordinator and group manager at the Fraunhofer Institute for Ceramic Technologies and Systems IKTS. Prospectively, the consortium plans to hydrochemically monitor the arsenic concentration in the mine water in an automated manner as well. Industry 4.0 technologies assume the control of the modules. Moreover, further innovative approaches, such as the testing of so-called “constructed wetlands”, are being investigated. The results shall be incorporated in large-scale solutions at a later time – in Ehren-friedersdorf but also at other mining locations in Germany, for example the Lausitz, or the whole world. “Mining leaves a large ecological footprint in the earth’s water balance”, emphasizes Hans-Jürgen Friedrich. “We hope that our project helps to improve the acceptance and the environmental balance of mining.”