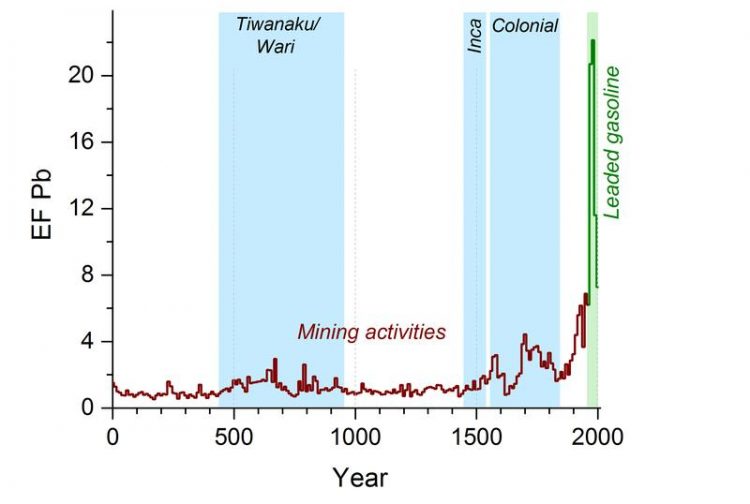 Record of anthropogenic lead emissions over the past 2,000 years in the Bolivian Altiplano. Shown are lead enrichment factors (EFs) compared to the regional background. Paul Scherrer Institute

Leaded gasoline was a larger emission source of the toxic heavy metal lead than mining in South America – even though the extraction of metals from the region’s mines historically released huge quantities of lead into the environment.

Researchers from the Paul Scherrer Institute PSI and the University of Bern have discovered evidence of the dominance of leaded gasoline based on measurements in an ice core from a Bolivian glacier. The study is to be published in the journal Science Advances on 6 March 2015.

The use of leaded gasoline was the dominant source of anthropogenic, i.e. manmade, lead emissions in South America from the 1960s onwards. The fuel even surpassed the thriving mining industry in this region of the world, which also releases large quantities of lead. In the past, measurements in the Northern Hemisphere had already revealed that emissions from leaded gasoline exceeded those of mining activities.

However, such conclusive evidence was lacking for the Altiplano region in South America. On this plateau, located between the western and eastern Andes, extractive metallurgy from mineral ores has been releasing large amounts of lead into the environment since the pre-colonial era.

Evidence of this has now been discovered by researchers from PSI and the University of Bern using measurements from a 138 m long ice core, drilled out of the Nevado Illimani glacier in eastern Bolivia. Glacier ice is an invaluable archive of past air pollution. By drilling ice from deep below the glacier surface and analysing it in the lab, scientists can reconstruct, how high the concentrations of these air pollutants were in the past.

The authors of the study have now succeeded in distinguishing local emissions from the Altiplano that can be attributed to mining from those originating from leaded gasoline that had been burnt mainly in more distant regions and carried along by the wind. Using a sensitive mass spectrometer, they determined the lead concentrations and the different composition of the isotopes in the lead from these two sources.

Isotopes are variants of a chemical element that differ from each other in their respective atomic weight. Chemically the various isotopes behave in the same way. Due to their differing weights, however, they can be separated in the mass spectrometer. Lead naturally occurs in the form of eight different isotopes. The four lighter ones are stable, while their four heavier counterparts decay radioactively. The origin of the lead in an environmental sample can be determined based on the different proportions of these isotopes. The researchers have now found the fingerprint for leaded gasoline revealed in the ratio of the two heaviest of the stable lead isotopes.

“We detected a lower ratio of lead-208 to lead-207 after 1960,” explains PSI researcher Anja Eichler, the first author of the study. “This isotope ratio deviates from that which is typical of lead from the Altiplano mines, but is in good agreement with the isotope ratio measured in the air in Chilean, Argentinean, and Brazilian cities in the 1990s. The majority of the lead in these air samples can clearly be traced back to leaded gasoline,” adds Eichler.

The researchers’ analyses also revealed that the anthropogenic, i.e. man-made, lead emissions prior to 1960 primarily entered the atmosphere via mining activities. The pollution was particularly severe during periods of the pre-Colombian cultures Tiwanaku/Wari and the Incas, the colonial era and with the increasing industrialisation of the 20th century. Lead was primarily released from silver mining and metallurgy until the end of the 19th century, after which emissions from the production of tin, copper, and nickel dominated.

The strongest increase in the last 2,000 years, however, can be attributed to the use of leaded gasoline after the 1960s, when the pollution level tripled compared to the historical values. Leaded gasoline contributed twice as much to the anthropogenic lead emissions as the region’s mining. The researchers found a clear indication of the overwhelming contribution from road traffic after 1960 in the simultaneous rise in the ice core nitrate concentration. Nitrate is formed in the air from nitrogen oxides, which are emitted from combustion engines. Like lead, nitrate is “washed” out of the air with precipitation and deposited in the snow or glacier ice.

The study once again highlights the importance of the ban on leaded gasoline for the environment and human health. If inhaled, lead can enter the bloodstream and ultimately the brain, where it poisons nerve cells. Leaded gasoline has already proven to be a key source of lead emissions in previous studies. “We now show that this is also the case in a region in which mining with its heavy lead emissions has been practiced intensively for millennia,” says Margit Schwikowski, co-author and head of the study and the Analytical Chemistry Group in the Laboratory for Radiochemistry and Environmental Chemistry at PSI.

The Paul Scherrer Institute PSI develops, builds and operates large, complex research facilities and makes them available to the national and international research community. The institute's own key research priorities are in the fields of matter and materials, energy and environment and human health. PSI is committed to the training of future generations. Therefore about one quarter of our staff are post-docs, post-graduates or apprentices. Altogether PSI employs 1900 people, thus being the largest research institute in Switzerland. The annual budget amounts to approximately CHF 350 million.

http://psi.ch/zENo Press release on the website of the Paul Scherrer Institute (with pictures)
http://www.psi.ch/lch Website of the Laboratory of Radiochemistry and Environmental Chemistry at PSI

Microplastic pollution linger in rivers for years before entering oceans