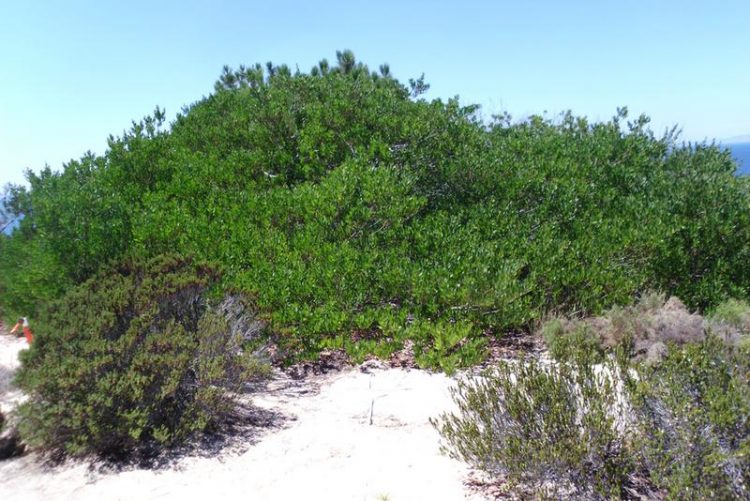 Acacia longifolia, which is native to Australia, is a species which was cultivated in Portugal primarily to stabilize dunes and as an ornamental plant; now it has spread out uncontrollably in Portugal and into many ecosystems around the world. This has varying effects on native species.

Because of a symbiosis with bacteria at its roots, Acacia longifolia can use atmospheric nitrogen from the air; it also grows fast and produces a lot of biomass. This means it adds nitrogen to the otherwise low-nutrient dune ecosystem, giving it unintended fertilizer.

The acacia also uses more water than the native species. A team of researchers headed by the ecologists Professor Christiane Werner and Christine Hellmann, in collaboration with scientists at the Universities of Münster and Hamburg, has worked out a new approach to determine the extent to which the physical surroundings influence the acacia’s interaction with other plants. Their findings have been published in the journal Scientific Reports.

The researchers developed a concept which could also incorporate background information such as soil type, the availability of nutrients, light intensity, wind, and soil moisture. Such models could help to better understand the interaction of acacias and other plants and improve planning of management strategies for the acacia.

The interaction between plants and their biotic and abiotic surroundings have a key influence on the structure and function of ecosystems. In order to determine the strength and spatial influence of such interactions, the team uses stable isotopes – heavy, non-radioactive forms of elements. How often these occur in materials in relation to the much more prevalent light isotopes can vary depending on the location. Measuring the isotopic ratio can therefore provide information on where and how the material came to be.

Isoscapes – from “isotope” and “landscape” – are maps which indicate how isotopes are distributed across the landscape. The team applied isoscapes on the basis of leaf material from native species to show where the proportion of nitrogen introduced by the acacia is high, and where the introduced species influences the growth of other species – either positively by adding nitrogen, or negatively by competing for water.

Up to now, researchers had only considered the plant species and their proximity to one another. But because this, according to the scientists, does not adequately represent the heterogeneity of an ecosystem, they have now included other influences such as remotely sensed topographic data.

The results show that the interaction between the acacia and native plants depends not only on the species but also on the location. In order to make each effect measurable, the nitrogen isotope ratio is used as a tracer. That means that the number of different nitrogen isotopes in plant leaves is determined.

The isotopic ratio provides information on where the nitrogen came from – whether it was introduced by an acacia or originated from the uninfluenced system. The model presented by the researchers has so far only been used on Acacia longifolia in Portugal, but could be transferred to other plants in other regions in the future. Approaches like this can increase the ability to describe, explain, and understand the complex interrelationships and dynamics in natural ecosystems.

Christiane Werner is Professor of Ecosystem Physiology at the Faculty of Environment and Natural Resources the University of Freiburg. Her assistant Christine Hellmann conducts research at the University of Bielefeld.