Home / Ecology, The Environment and Conservation / Dispersal of Fish Eggs by Water Birds – Just a Myth?
19.02.2018

Dispersal of Fish Eggs by Water Birds – Just a Myth? 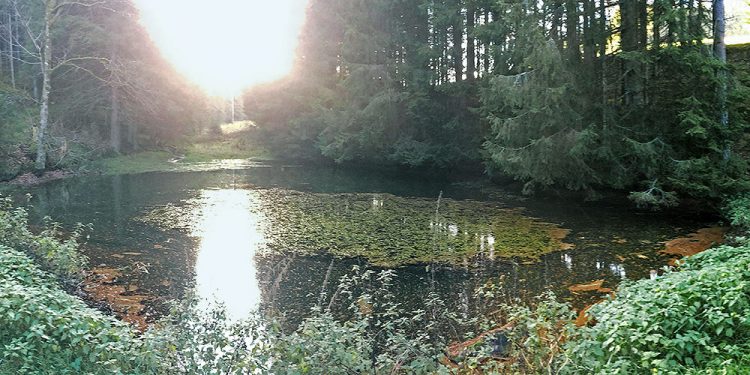 Small pond in the forest: This is only accessible by land, but there are fish here. (Picture: University of Basel, Department of Environmental Sciences)

Small lakes with a surface area of less than 100 m2 represent the majority of global freshwater ecosystems. Many of these lakes are found in remote, often mountainous areas with no inflow and outflow. Yet in most of these lakes, there are fish. So how do fish reach lakes and ponds that are not connected to other bodies of water?

This question was already addressed by some of the leading natural scientists of the 19th century such as Charles Darwin, Alfred Russel Wallace and Charles Lyell, who all came to the same conclusion – water birds must be responsible for fish dispersal.

And they had a plausible explanation for this: fish eggs are sticky and can survive for some time out of water. The theory is thus that the fish eggs stick to water birds’ feathers or feet; the birds then fly from one body of water to the next, where the fish hatch from their eggs.

A study carried out by environmental scientists from the University of Basel has now shown that although the research community considers this to be a proven theory, no studies have been published to confirm it.

To objectively measure the lack of evidence, the Basel research team conducted a systematic literature review. The result shows that no in-depth scientific studies exist to prove that water birds disperse fish eggs.

To rule out the possibility that the unsuccessful search was due to their method, the researchers also used the same approach to look for evidence of the dispersal of aquatic invertebrates. In this case, they found numerous scientific publications supported by experiments and field studies.

For their study, the Basel researchers also reviewed online forums and surveyed around 40 experts from research and industry. Their aim was to determine the prevalence of the theory of fish dispersal by water birds both inside and outside the research community. The majority of experts that took part in the survey found the theory so plausible that they deemed the mystery to have been solved. However, none of them could draw on any empirical evidence.

“The lack of evidence does not mean that water birds are not responsible for the dispersal,” says Dr. Philipp E. Hirsch from the University of Basel. “But we simply do not yet know what roles are played by birds, humans and other processes.”

Understanding the way that fish are dispersed in remote bodies of water is important for the maintenance of biodiversity. The knowledge of how species colonize new habitats forms the basis for the preservation of refuges and targeted reintroduction and also helps prevent the spread of invasive species.