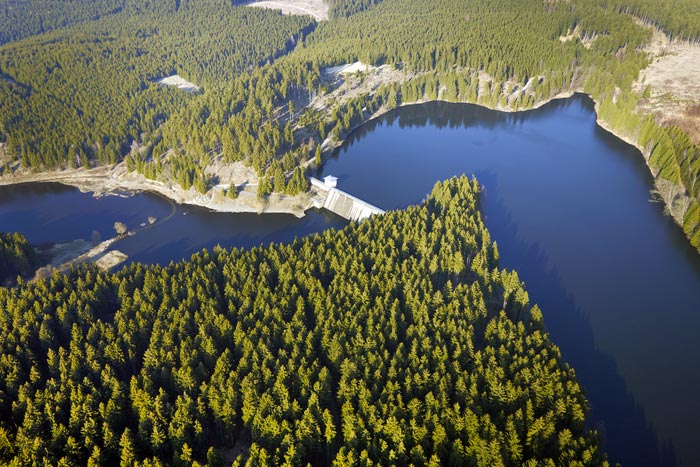 The Rappbode reservoir in the Harz region is surrounded by forests and is the largest drinking water reservoir in Germany.
Credit: André Künzelmann/UFZ

The disappearance of forests will have consequences for water quality in reservoirs.

Heat waves, drought, floods, forest fires – the consequences of climate change are increasing and are changing our environment. A prime example is the countryside in the catchment area for the Rappbode reservoir in the eastern Harz region. This is the largest drinking water reservoir in Germany and provides drinking water for roughly one million people. Long periods of drought over the years from 2015 to 2020 have so severely weakened the tree population in the Harz region that parasites such as bark beetles have been able to propagate. This further exacerbated the effect: The trees were further damaged and quickly died off. “Over the past four years, the Rappbode catchment area, characterized by conifers, primarily spruce, has lost over 50 percent of its forest,” says UFZ hydrologist and last author Prof. Michael Rode. “This massive forest dieback is advancing rapidly and is dramatic. This will have consequences for the drinking water reservoir.”

Forests play a key role in the water cycle. They filter the water and bind nutrients and are therefore necessary for good water quality. The fewer nutrients – i.e. nitrogen or phosphorous compounds – contained in reservoir water, the better it is for drinking water treatment. “This makes it more difficult for algae to develop, making drinking water treatment in the waterworks more cost-effective and easier,” explains UFZ lake researcher and co-author Dr. Karsten Rinke. “Nutrient management in water conservation areas is therefore very important. Over the past decades, long-term concepts with close cooperation between forest and water management have advanced the development of large areas of forest in the Rappbode reservoir catchment area.” The rapid forest decline in the eastern Harz region is now a matter of grave concern for the reservoir and waterworks operators.

Spurred by this development, the UFZ team has investigated the effects of climate-induced deforestation on reservoir water quality in their model study. This study was based on data from the TERENO (Terrestrial Environmental Observatories) environmental observatory network, in which the UFZ is a participant with the Harz/Central German Lowland Observatory. “We were able to access environmental data from a period of over ten years, providing us with a solid set of data,” says Dr. Xiangzhen Kong, also a UFZ environmental scientist and lead author of the study. The team used data from the international ISIMIP project (Inter-sectoral Impact Model Intercomparison Project) to predict future climate changes. “We first fed these data into a model in order to estimate the climate-related effects on the nutrient balance in the catchment area,” explains Kong. “The resulting data were then processed in a reservoir ecosystem model with which we were able to determine the effects of different deforestation scenarios on the predicted water quality for 2035.

The Rappbode reservoir is supplied by three different catchment areas, two of which were included in the study. “The Hassel catchment area is characterized by agriculture, while that of the Rappbode is predominantly forest – at least that was the case before the spruce forests died,” says Kong. Before the water from the two catchment area flows into the large Rappbode reservoir, it is first retained by an upstream pre-dam. The agricultural influence results in a significantly higher nutrient content in the water in the Hassel pre-dam than that in the Rappbode pre-dam. “We were able to demonstrate that, for an anticipated deforestation of up to 80 percent, the Rappbode predam will experience an 85 percent increase in dissolved phosphorus concentration and a more than 120 percent increase in nitrogen concentration within only 15 years. The Rappbode pre-dam will thus reach nearly the same nutrient levels as the Hassel pre-dam,” says Kong. This will result in a more than 80 percent increase in diatoms and more than 200 percent increase in green algae in the Rappbode pre-dam. These results highlight the coming necessity for a wide range of adaptations in drinking water management. “Nutrient input to reservoir catchment areas should be reduced even more than previously, reforestation projects with drought-resistant tree species should be further promoted and waterworks should be adapted to the impending developments with selective water removal strategies,” says Rode. “And what remains important and must be further increased: extensive, granular environmental monitoring.”

The results for the Rappbode reservoir can be applied to other reservoir catchment areas in similar regions. “Forest dieback as an indirect consequence of climate change has a more pronounced effect on reservoir water quality than direct effects of climate change such as elevated water temperature. We were actually surprised by the extent of this effect”, says Kong.