Cheetah menu: wildlife instead of cattle 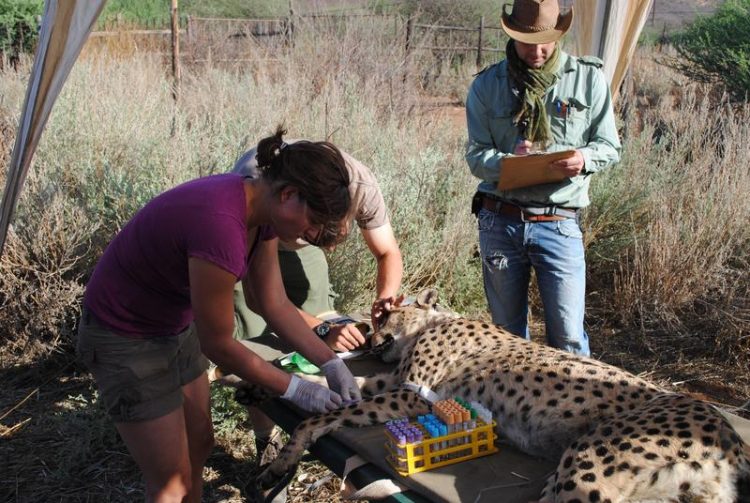 The conflict is an old one: wherever there are carnivorous wild animals, farmers are concerned about their livestock. In Namibia, the concern refers to the possible threat from cheetahs on cattle. When farmers in Namibia are missing a bovine calf, cheetahs are regularly under suspicion – nowhere else in the world are there as many animals of this vulnerable species as on commercial farmland in Namibia. But the suspicion can rarely be confirmed without demur.

In their recent study, scientists of the IZW investigated whether cattle is on top of the cheetahs’ menu. For this purpose they used an indirect method with which they were able to assess the diet over longer periods. “Traditionally, carnivore diet is determined by examining samples of fresh faeces. Faecal samples only provide a snapshot of the diet, based on the detected hair and bone samples of prey animals. One cannot therefore conclude which food items cheetahs devour in the long run”, explains Christian Voigt from the IZW.

Instead the scientists used samples of cheetah hair to determine the stable isotope ratios of carbon and nitrogen. Herbivores have different food webs. One is based on shrubs, trees and herbs whose photosynthesis contains intermediate products with three carbon atoms (C3).

In contrast, grasses exhibit a C4 photosynthesis. These food webs can be differentiated with the help of the involved carbon isotopes. Herbivores typically only belong to one food web and the isotope ratio hence deposits in their body tissue. Small antelopes such as springbok or steenbok specialise on shrubs and herbs whereas the oryx antelope feeds on grass – just like the cattle. One step up in the food chain the isotope ratio of the prey transfers to its predator.

The study shows that herbivores of the C4 food chain, to which cattle belong, are nearly irrelevant to the cheetah’s diet. Grazers are only occasionally considered as prey by males when they occur in groups of two or three animals.

In this project the IZW scientists collaborated closely with the farmers. “We live with the farmers on their farmland and share our scientific results with them. In this way, we attain a very high acceptance”, emphasises Bettina Wachter. “The farmers passed on their experience in dealing with these big cats, as cheetahs cannot be simply lured with bait like many other carnivores”, she adds.

This is owed to the fact that cheetahs only eat prey they brought down themselves. Thus, aided by the farmers, the scientists installed box traps at marking trees, which were hidden by thorn bushes except for a narrow passage. The only way to reach their tree is passing the trap. Once a cheetah is captured it is sedated and thoroughly examined: body length and weight are determined, samples of blood and hair are taken and then the scientists release the cheetah equipped with a tracking collar.

“We conclude that the farmer’s problems are smaller than they had assumed before this study”, Voigt sums up. This study, published in the scientific online journal PLOS ONE, will contribute to the protection of cheetahs – but not in adversity to the interest of the farmers. “We understand their position. The concepts of species conversation always need to be balanced against the livelihood of humans”, says Wachter. The study is therefore an important mile stone to resolve the conflict between farmers and cheetahs.

Background information:
The Leibniz Institute for Zoo and Wildlife Research (IZW) investigates the vitality and adaptability of wildlife populations in mammalian and avian species of outstanding ecological interest that face anthropogenic challenges. It studies the adaptive value of traits in the life cycle of wildlife, wildlife diseases and clarifies the biological basis and development of methods for the protection of threatened species. Such knowledge is a precondition for a scientifically based approach to conservation and for the development of concepts for the ecologically sustainable use of natural resources. The IZW belongs to the Forschungsverbund Berlin e.V. (www.fv-berlin.de)
www.izw-berlin.de