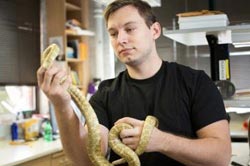 The ancestor of snakes and lizards likely gave birth to live young, rather than laid eggs, and over time species have switched back and forth in their preferred reproductive mode, according to research published in print in Ecology Letters Dec. 17.

“This is a very unusual and controversial finding, and a major overturn of an accepted school of thought,” said Alex Pyron, Robert F. Griggs Assistant Professor of Biology in the Columbian College of Arts and Sciences at the George Washington University. “Before, researchers long assumed that the ancestor of snakes and lizards laid eggs, and that if a species switched to live birth, it never reverted back. We found this wasn't the case.”

The findings push researchers' understanding of the evolution of live birth a lot further back in time to 175 million years ago, showing that live birth has a much more ancient past as a strategy than previously believed. The findings are backed by several recent plesiosaur and mosasaur fossil discoveries and the fossil record of a few lizards from the Cretaceous Period, which had embryos in the mother and had live birth.

Dr. Pyron analyzed an evolutionary tree containing all groups of squamates—the group that comprises lizards and snakes—which he and a team of researchers published in the journal BMC Evolutionary Biology earlier this year. The tree, which uses DNA sequencing technology to group thousands of lizards and snakes, includes all families and subfamilies and most genus and species groups.

Dr. Pyron is working next to analyze all tetrapods—a group comprised of animals with four legs, such as amphibians, reptiles, birds, mammals and turtles— to see if there are any new surprises about the evolution of their reproductive modes. He also wants to test the genetics at work behind the evolutionary switching of reproductive mode.

The Columbian College of Arts and Sciences

Established in 1821 in the heart of the nation's capital, the George Washington University Columbian College of Arts and Sciences is the largest of GW's academic units. It encompasses the School of Media and Public Affairs, the Trachtenberg School of Public Policy and Public Administration and more than 40 departments and programs for undergraduate, graduate and professional studies. The Columbian College provides the foundation for GW's commitment to the liberal arts and a broad education for all students. An internationally recognized faculty and active partnerships with prestigious research institutions place Columbian College at the forefront in advancing policy, enhancing culture and transforming lives through research and discovery.
The George Washington University

In the heart of the nation's capital with additional programs in Virginia, the George Washington University was created by an Act of Congress in 1821. Today, GW is the largest institution of higher education in the District of Columbia. The university offers comprehensive programs of undergraduate and graduate liberal arts study, as well as degree programs in medicine, public health, law, engineering, education, business and international affairs. Each year, GW enrolls a diverse population of undergraduate, graduate and professional students from all 50 states, the District of Columbia and more than 130 countries.