Home / Ecology, The Environment and Conservation / Allowing plant residues to rot on the field is good for the climate
08.07.2021 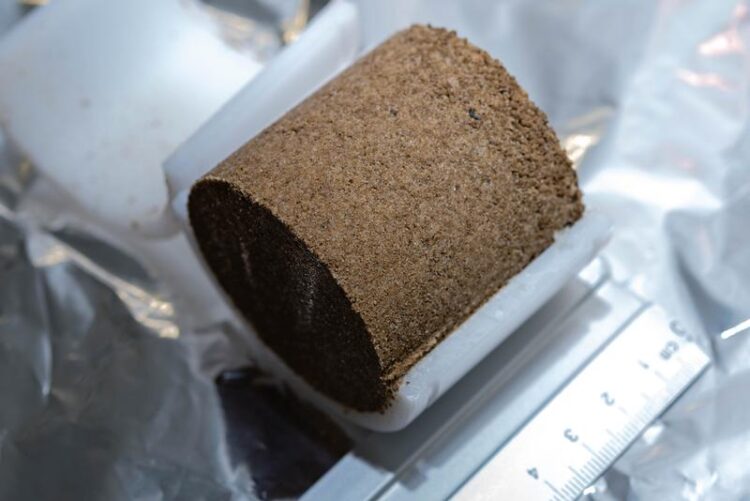 Soil Sample
(c) Carsten W. Müller
Free for use in reporting on TUM, with the copyright noted.

Plants rotting in the soil are valuable for more than just compost. In fact, plant residues play a crucial role in keeping carbon in the soil, which is important for reducing the planet’s CO2 emissions. This is the conclusion of a new study by researchers at the Technical University of Munich (TUM) and other institutions.

Soils are a key player in the global carbon cycle, storing more than twice as much carbon as the atmosphere. Researchers have now studied the role of plant carbon inputs in increased soil carbon storage in more detail.

“Small pieces of dead plants are often seen as just fast food for bacteria and fungi in the soil. We have shown that plant residues actually play a greater role in the formation and storage of carbon in the soil than previously thought,” says Kristina Witzgall, a scientist at the Chair of Soil Science at TUM.

In a study, the research group mimicked the natural decomposition process of plant residues in the laboratory to analyze how exactly carbon is stored in the soil. To do this, the plant residues were mixed directly into the soil material and then encapsulated in small cylinders. After an incubation period of three months, the researchers analyzed the chemical processes using a special imaging technique that makes even the smallest details visible.

“It turned out that fungi play a particularly important role in the decomposition of the added plant residues – more than bacteria. We were able to see that there is a translocation of plant carbon deeper into the soil. This occurs as a result of the expansion of fungal hyphal networks,” Witzgall says.

“The fungi wrap their white filaments around the plant debris and ‘glue’ it to the soil. Then the fungi eat the carbon in the plants and store a lot of carbon in the soil,” explains Carsten Müller, Professor at the University of Copenhagen and one of the authors of the study.

In the past, science has focused mainly on carbon storage at the surface of minerals such as clay. But the new findings show that plant residues themselves have the ability to store carbon because important processes occur directly on the surface of the plant residues.

“Plant residues are absolutely central to carbon storage. They can help ensure that carbon is stored in the soil for longer. That’s why we should use them much more in the future,” says Carsten Müller.

Could save CO2 in the future

The method of allowing plant residues to rot in order to optimize arable land is not new. “To effectively increase soil organic carbon through soil management, a better understanding of the dynamics and complexity of soil carbon formation and persistence is needed,” Witzgall says. With their study, the scientists have clarified the mechanistic processes of what happens in the soil.

“Plant residues for storing carbon are an important factor for fertile and climate-friendly agricultural soils. In the future, we also plan to conduct experiments in which we place rotting plants deeper into the soil so that the carbon can be stored there for longer,” says Carsten Müller. If better conditions for carbon storage in the soil were created, this could store between 0.8 and 1.5 gigatons of carbon per year. By comparison, the world’s population has emitted 4.9 gigatons of carbon per year over the past 10 years.

Kristina Witzgall
Scientist at the Chair of Soil Science
+49 8161 71 4206
kristina.witzgall@tum.de