Home / Ecology, The Environment and Conservation / Action and reaction
05.05.2014 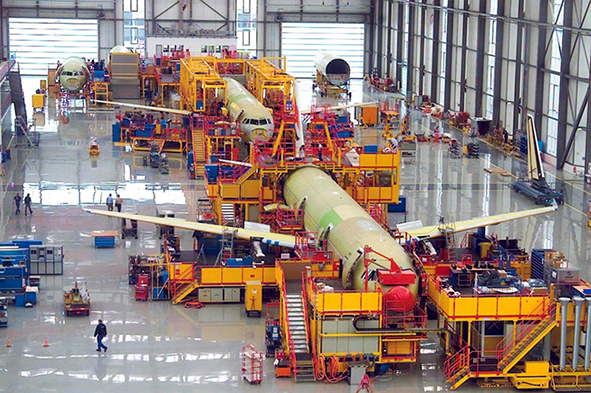 Airbus manufacturing facility in Hamburg: With the help of the ENDAMI software tool, aviation industry designers and planners are able to draw up an LCA at an early stage. © EADS

One of the things that engineer Robert Ilg and his colleagues do is to conduct Life Cycle Assessments (LCAs) in the energy and mobility field. They are making LCAs more easily accessible to designers and development engineers in the industry with the help of their eco DESIGN® software tool called ENDAMI (life cycle environmental data models and interface development in aviation).

This web-based tool was developed in collaboration with the Life Cycle Engineering Department, Chair of Building Physics at the University of Stuttgart and the Fraunhofer Institute for Computer Graphics Research IGD as part of Clean Sky, Europe’s largest aeronautical research and innovation program.

Even though LCAs are already standard in most industries, the aviation sector still has a lot of catching up to do. “Given the continual growth seen in the aviation industry, Life Cycle Assessments will play an ever more important role in the future,” says Ilg. Passenger numbers have risen steadily in recent years while forecasts predict continued significant growth of the world’s aviation fleet.

Figures for 2013 indicate that there are currently some 17,740 passenger aircrafts in service, a total that European aircraft manufacturer Airbus’s growth forecasts see rising to 36,560 aircrafts by 2032. “With growth rates like this, great efforts have to be taken to keep emissions down,” says Ilg in reference to the ambitious targets the industry has set for itself. Clean Sky targets for the year 2020 call for a reduction of noise pollution by 50 percent, of fuel consumption and CO2 emissions by 50% and of NOx emissions by 80%. From 2020 onwards, any further growth in the aviation sector is also to be CO2 neutral.

This is one of the major factors driving the industry’s preference for lightweight materials and new technologies. Reducing aircraft weight, for example, directly impacts fuel consumptionand so addresses both the economic and ecological aspects of air travel. But what is the environmental impact of using these materials and technologies?

Life Cycle Assessment (LCA) is – simplified – what experts call the systematic analysis and evaluation of the environmental factors related to aircraft components. This analysis takes into account potential environmental effects generated throughout a product’s entire life cycle, from its production and utilization through to recycling and disposal. The first stage in the evaluation process is to collect and process all data relevant to the LCA. Until now, however, the computer programs used for this have relied on data collected after aircrafts had already been manufactured.

Furthermore, the software systems used are often so complex that only LCA specialists can understand them. Prompted by these drawbacks, Ilg and his colleagues decided to take a new approach, devising their ENDAMI software tool to give designers and developers access to a user-friendly LCA program. The advantages are plain to see: LCAs can now be drawn up in advance by anyone preparing a new aircraft concept. This allows an aircraft’s environmental impact to be calculated and optimized during its design phase. “Anyone in the aviation sector who doesn’t draw up an LCA at an early stage will have to address the consequences at great expense and effort further down the line,” explains Ilg.

“This is why preventive planning is so important. The models that manufacturers are developing today will be flying in 2030, so it is essential for their designers to face questions regarding the environmental impact these aircraft early in the design process.”

ENDAMI draws on a comprehensive database that contains not only LCA-based environmental information related to various standard components but also provides the baseline for analysis of alternative components and materials. It is even possible for users to add information of their own to the database. “Since all flows of materials and energy are quantified, meaningful LCA results are now only a few clicks away,” says Ilg. It takes no time for designers to learn about a component’s environmental “burden” is. One material which is commonly used in aircraft construction is aluminum. When it arrives at an aircraft manufacturer’s plant, this material already carries an “ecological backpack”.

For one kilogram primary aluminum sheet, this backpack is loaded with around 140 megajoules (MJ) of primary energy, which was consumed during extracting and processing the bauxite, transporting it to and processing it in Europe. This is equal to the energy in almost four liters of heating oil. “The aviation sector’s particularly high demands on material quality considerably increase components’ environmental impact at the subsequent production process stage. This is why LCA data must be precisely tailored to the sector. This aviation-specific aspect has never been taken into account by any tool available so far,” explains Ilg.

Specially programmed LCA background models are a further important building block in the new software. These enable designers to apply different components to various scenarios and see right away the effects of various materials, component variants or process parameters on respective LCA results. Designers no longer have to perform time-consuming analyses or develop LCA models on their own. Instead they can directly compare the component they have designed to reference components stored in the software’s database.

Aircraft designers can use the software to generate environmental analyses which was until now limited to LCA specialists,” says Ilg. “This means the aviation sector can take environmental aspects into consideration at a very early – and decisive – stage of development.” It allows developers to consider a wide range of materials or combinations of materials before an aircraft goes into production, without having to actually build the aircraft each time.

ENDAMI is also capable of allowing various different custom profiles and environmental indicators to be selected where necessary. As Ilg explains, this allows businesses to specifically evaluate the environmental variables which are relevant to them, such as the greenhouse effect, eutrophication and acidification.

The researchers and developers were particularly keen to ensure the tool is user-friendly. In addition to intuitive menu navigation and easy data import and export functions, the software is also able to “think” itself. “We’re working on getting the program to be able to notify the user of any areas on the aircraft with scope for further optimization,” Ilg adds.

“Our Clean Sky industrial partners are already working with ENDAMI, and so far their reactions to the program have been consistently positive,” Ilg is pleased to report. The software tool will be developed further once Clean Sky 2 is given green light. At present, scientists are already working on a version for mobile devices that will make it even easier for designers and development engineers to deal with LCAs.