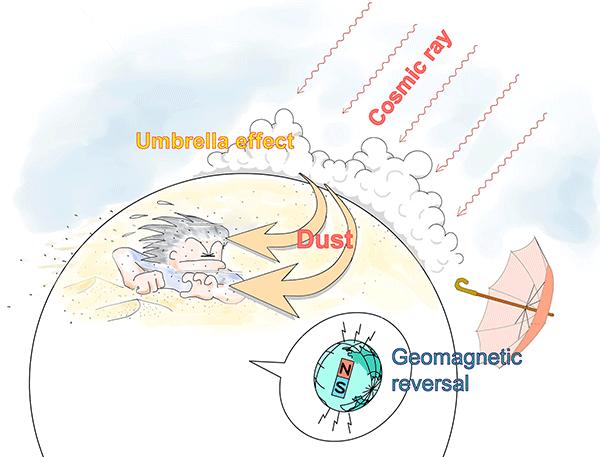 This is evidence that galactic cosmic rays influence changes in the Earth's climate. The findings were made by a research team led by Professor Masayuki Hyodo (Research Center for Inland Seas, Kobe University) and published on June 28 in the online edition of Scientific Reports.

The Svensmark Effect is a hypothesis that galactic cosmic rays induce low cloud formation and influence the Earth's climate. Tests based on recent meteorological observation data only show minute changes in the amounts of galactic cosmic rays and cloud cover, making it hard to prove this theory.

However, during the last geomagnetic reversal transition, when the amount of galactic cosmic rays increased dramatically, there was also a large increase in cloud cover, so it should be possible to detect the impact of cosmic rays on climate at a higher sensitivity.

In the Chinese Loess Plateau, just south of the Gobi Desert near the border of Mongolia, dust has been transported for 2.6 million years to form loess layers – sediment created by the accumulation of wind-blown silt – that can reach up to 200 meters in thickness. If the wind gets stronger, the coarse particles are carried further, and larger amounts are transported.

Focusing on this phenomenon, the research team proposed that winter monsoons became stronger under the umbrella effect of increased cloud cover during the geomagnetic reversal. They investigated changes in particle size and accumulation speed of loess layer dust in two Loess Plateau locations.

In both locations, for about 5000 years during the geomagnetic reversal 780,000 years ago, they discovered evidence of stronger winter monsoons: particles became coarser, and accumulation speeds were up to > 3 times faster. These strong winter monsoons coincide with the period during the geomagnetic reversal when the Earth's magnetic strength fell to less than ¼, and galactic cosmic rays increased by over 50%.

This suggests that the increase in cosmic rays was accompanied by an increase in low-cloud cover, the umbrella effect of the clouds cooled the continent, and Siberian high atmospheric pressure became stronger. Added to other phenomena during the geomagnetic reversal – evidence of an annual average temperature drop of 2-3 degrees Celsius, and an increase in annual temperature ranges from the sediment in Osaka Bay – this new discovery about winter monsoons provides further proof that the climate changes are caused by the cloud umbrella effect.

“The Intergovernmental Panel on Climate Change (IPCC) has discussed the impact of cloud cover on climate in their evaluations, but this phenomenon has never been considered in climate predictions due to the insufficient physical understanding of it”, comments Professor Hyodo.