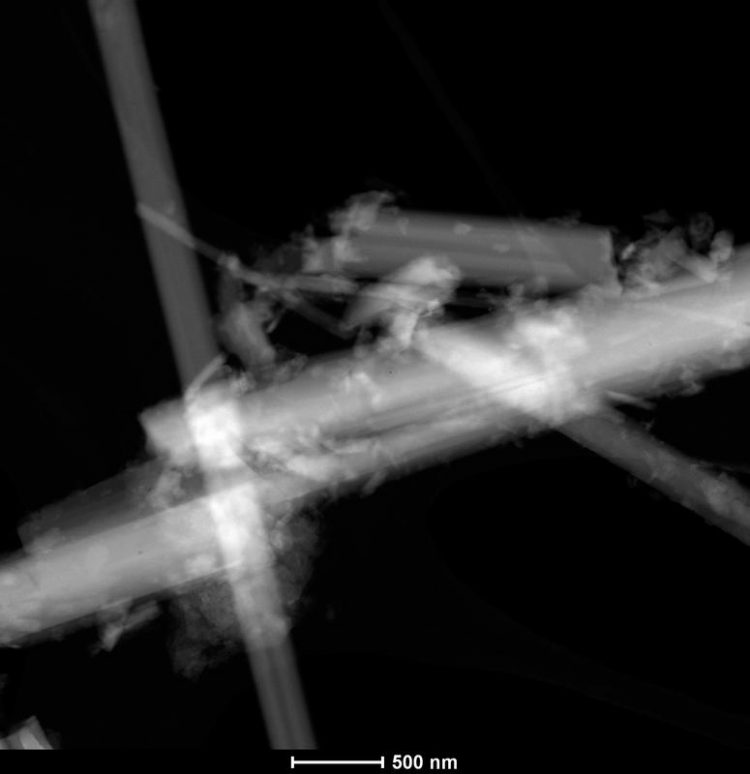 Fibers of the mineral erionite with adhering particles, taken by a transmission electron microscope at the Institute of Geosciences of the University Jena. Photo: Kilian Pollok/FSU Jena

The mineral erionite is considered to be highly carcinogenic and is on the World Health Organisation’s list of substances that cause cancer. A few years ago, an entire village in Turkey actually had to be moved, because the substance was very common in the surrounding area and every second inhabitant died of a particular type of cancer caused by breathing in erionite particles.

Up to now it has been thought that iron as a constituent element of the mineral erionite is the reason for the carcinogenic effect. However, mineralogists of Friedrich Schiller University Jena (Germany), together with colleagues from the University of Modena (Italy), have discovered that this metal does not even appear in the crystal structure of erionite.

Iron is not part of erionite

“Like asbestos, erionite is composed of fibres, which are inhaled and reach the lungs, where they cause considerable damage, because they are too long to be eliminated by the body’s own defences,” explains Dr Kilian Pollok of the University Jena. “In both cases, doctors have until now considered the iron in the mineral to be mainly responsible for the cancer cases, as that metal encourages the transition from inflammation to tumour development.”

However, the latest findings mean that this assumption needs to be re-examined, as, unlike most substances lumped together under the umbrella term asbestos, iron does not form part of erionite’s crystal structure.

“Using a transmission electron microscope, we examined erionite samples just a few micrometres in size in high resolution,” says Prof. Falko Langenhorst. “In this way, we established that iron is only present in accompanying minerals attached to erionite, not in the erionite itself.”

Usually, the body’s own phagocytes are able to deal with such iron particles, but they might be hampered by the direct contact to the fibres. The silicate, which results from weathering processes, is found in various volcanic regions worldwide. However, the iron content of the accompanying material attached to it can vary considerably, depending on the environment and the region. For example, diverse US samples show high and low concentrations of the metal, which appear to be correlated with toxicity.

The mineralogists’ new findings therefore raise new questions that need to be answered: does erionite have a carcinogenic effect purely due to its asbestos-like form or does this effect develop only in combination with the ferrous particles? This is important, because although the material does not have – and has never had – any specific use, in contrast to asbestos, it still frequently ends up in proximity to humans. In the USA, for example, tuff containing erionite has been used as road gravel.

“As mineralogists, we cannot of course resolve current medical issues, but thanks to the outstanding technical facilities here in Jena, we are able to use basic research to provide important new information on carcinogenic mechanisms,” says Langenhorst. “And it shows once again how multifaceted mineralogy as a science is.”