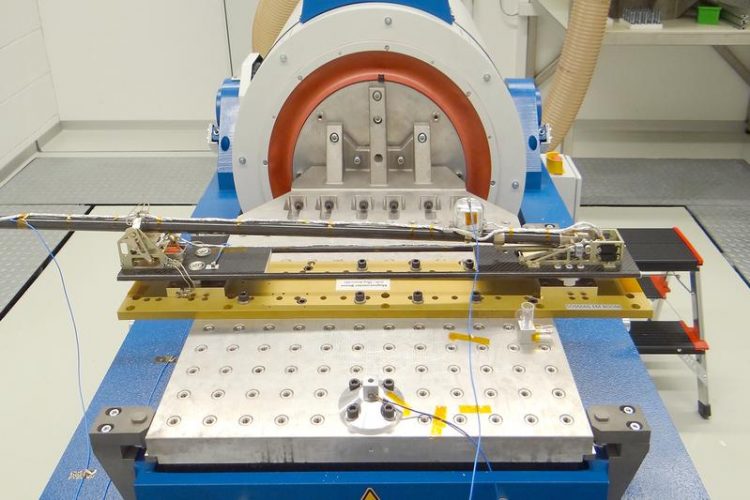 SOSMAG-Magnetometer sensor of TU Braunschweig in a test programme. It is the design template for a new instrument to be integrated in "Comet Interceptor" mission in 2028. Credits: IGeP/TU Braunschweig

Three spacecraft will intercept a pristine comet or a previously unknown interstellar object that is about to enter the inner solar system. The spacecraft observe several points around the comet simultaneously.

From this data, they create a 3D profile of a new, dynamic object and its environment. The comet contains untouched material that has been preserved since the beginning of the solar system and has not been altered by the heat of the sun.

“Comet Interceptor” builds on the scientific achievements of the two completed comet missions “Giotto” and “Rosetta”, in which the TU Braunschweig was also involved. The Institute for Geophysics and Extraterrestrial Physics (IGeP) is once again contributing a magnetometer sensor.

The aim is to measure the magnetic fields in the vicinity of the new comet in order to understand, for example, how the plasma behaves at the comet. “The Rosetta mission was a good foundation for our science and showed us which scientific questions we cannot answer yet.

It has not yet been clarified how the diamagnetic cavity is formed. And this is exactly where 'Comet Interceptor' should help,” says Dr. Charlotte Götz, scientist at the Institute of Geophysics and Extraterrestrial Physics.

“Comet Interceptor” is scheduled to launch in 2028 with the “Ariel” mission, which will take it to near-Earth space. The composite spacecraft will be positioned at the Sun-Earth Lagrange Point L2, which is 1.5 million kilometres “behind” the Earth as seen from the Sun. There the spaceship waits for a suitable target and then travels together towards the comet before the three modules separate a few weeks before the comet is intercepted. Each module will be equipped with a complementary scientific payload offering different perspectives on the comet's nucleus and its gas, dust and plasma environment. These “multi-point” measurements are needed to analyze the dynamic nature of the object as it interacts with the ever-changing solar wind environment.

What is new about the mission is that, for the first time, researchers can measure at several points: Two more satellites will also be equipped with magnetometers from Japan and Great Britain. “Since the plasma at the comet consists of water ions and the ions of the solar wind, it is important to get a kind of weather forecast,” says Dr. Götz. This is provided by one of the three satellites, while the other two observe the reaction of the plasma.

“Comet Interceptor” was selected as ESA's new fast mission under the Cosmic Vision programme. The IGeP has written parts of the proposal, on the basis of which the mission has now been selected. A special feature of the mission is that it has to be prepared comparatively quickly, because the launch is planned for 2028 – in space travel, the lead times for planned projects are usually much longer. “This means that all instruments must be off the shelf. We recently developed a magnetometer that can be rebuilt without major design changes,” says Dr. Götz about the so-called Fast or F-Class mission. The “fast” refers to the implementation time, with a total development time from selection to launch of about eight years.